Rumors about the revival of the Ukrainian "Antonov" were greatly exaggerated 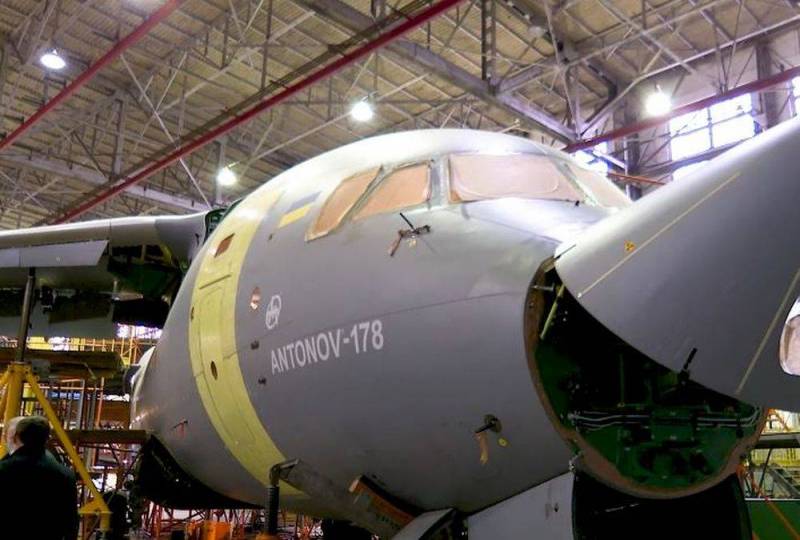 At the end of last year, a number of media reported that the Ukrainian state-owned aircraft manufacturing company Antonov, which was on the verge of survival, allegedly had a chance for a revival. New prospects were associated with the intentions voiced by the leadership of the “non-independent” airline to create a kind of “national airline”, for which they were allegedly going to purchase new liners from the “domestic manufacturer”. It was also said about "a number of other orders", which seem to be "in the portfolio" of "Antonov" and even carried out by this enterprise. All this sounded quite optimistic and it remained only to wait for the plans to translate into something concrete.


As is usually the case in Ukraine, the reality turned out to be much more unsightly than the timid hopes of the optimists. Antonov met the beginning of the current year, finding himself at the epicenter of numerous scandals and to the accompaniment of accusations of the most unpleasant nature sounding against him. Worst of all, the company has problems both at the national and international levels. And this once again jeopardizes the desperate attempts of the "Antonovites", whose products have been completely unclaimed in their homeland for many years, to enter foreign markets in order to really "raise" the fading production from its knees. Apparently, there is no chance of this, and is not expected.

Peruvian scandal: who cheated whom?

I must say that in recent years, Antonov really managed to conclude two very real contracts. Both of them are for the production of the An-178, short-haul transport aircraft based on the An-158. This machine is considered as a “modern replacement” for the well-known An-12 transport aircraft. The company received both orders from the "power" departments. And if in one case the Ukrainian Ministry of Defense acted as a buyer, in the second case it was the police of distant Peru. It is with this sad story that we will begin the story of the current misadventures of Antonov. The contract was signed on November 12, 2019. In accordance with it, 24 months after the conclusion of the deal, the Ministry of Internal Affairs of Peru was to become the owner of one An-178 aircraft, which would cost him 65 million dollars. At the same time, a very significant detail is that from the Ukrainian side, for some reason, not the Antonov State Enterprise, but the Spetstechnoexport concern acted as one of the high contracting parties. This was motivated by the fact that the supply of "military and dual-use products" abroad is exclusively within its competence.

One way or another, but by carrying out simple arithmetic calculations, one can come to the conclusion that the brand new An-178 was supposed to go overseas last fall. Nothing of the sort, however, happened. The Peruvian commission for the acceptance of the “board”, which arrived at the “nezalezhnaya” in October 2021, found to its horror that the car was ready by a maximum of 30%. In principle, there could be no talk of putting it into operation. Moreover, according to the offended police officers today, the Ukrainian side did not comply with other points of the agreement.

In particular, it did not carry out the promised training at its own base for future aircraft operators and did not provide the customer technical documentation for it. From this very moment, a grandiose international squabble between Peru and Ukraine begins, in which both sides blame what happened (that is, in the failure of the contract) exclusively on their own opponents, refusing to take any responsibility. I must say that in the Latin American country, the scandal with the Ukrainian An-178 has acquired a truly national scale. In addition to the Accounts Chamber and, as they say, “competent authorities”, of course, journalists and even deputies of the local parliament joined in, creating a special commission of inquiry on this matter, at whose meetings high-ranking police officials involved in the ill-fated deal had to regularly take the rap . At the same time, it should be taken into account that Peru has a very large and absolutely positive experience in operating Soviet (and later Russian) aviation equipment - our Su and MiGs are part of the local Air Force. And even for rotorcraft, the score goes to dozens at all - it’s not for nothing that Russian Helicopters has its own representative office in the country to service them. The Ukrainian "board" in the local press is referred to as "a ghost plane for 65 million."

However, in the "nezalezhnaya" in turn, they say: the whole problem lies in the fact that Peru simply did not make the required advance payments and did not finance the construction of the ordered An-178. Yes, there really was some extremely murky story with the refusal of the National Bank of Peru to issue bank guarantees to cover the contract, which initially seemed doubtful to many. Today, the voices of skeptics are sounding louder in the country, calling on the government to rip off all the prescribed penalties from Antonov, and then stop fooling around and buying Russian Il-76 or Il-12. There is nothing to cover Kiev with - after all, there is no plane. Or is there anyway?

An-178 for the Ministry of Defense - we will not take off, so we will brag

The irony of the situation lies in the fact that in parallel with the "Peruvian order" SE "Antonov" had to build three more similar machines - An-178-100R for the Ukrainian army. The corresponding agreement (or rather, a “memorandum of cooperation”) was signed by aircraft manufacturers with the Ministry of Defense in December 2020. At the beginning of next year, it even received funding in the amount of 3 billion hryvnia (8.2 billion rubles). But with the creation of the aircraft, some completely incomprehensible things are happening. In May last year, Ukroboronprom General Director Yuriy Gusev swore to the Ukrainian public that “in 6-8 months a test flight” of the first “board” built for the military will take place.

Less than a month later, however, Antonov CEO Sergei Bychkov expressed more cautious expectations, saying the plane would take off "sometime in the first quarter of 2022." However, journalists admitted to the assembly shops of the enterprise in September 2021 subsequently stated that “the aircraft does not look at all ready for any tests.” According to eyewitnesses, not only was it missing avionics, a significant part of the internal systems - the “80% ready” car, according to Gusev, did not have engines installed, and the airframe itself looked unfinished. Nevertheless, in the same September, Alexander Vitushko, Deputy General Director of the Antonov State Enterprise for Production, continued to assert that “small pieces of work remained on the aircraft, which we will complete in August-September” and threatened to present the An-178 for testing at the end of 2021 . Nothing of the sort, of course, happened. On December 28, not the first flight took place, but only the rolling out of the ill-fated "board", which immediately gave rise to a new scandal.

The thing is that Antonov promised to build new aircraft for the “glorious Ukrainian warriors” without a single part “from the aggressor country”, that is, completely and completely replace all Russian components, which in this model accounted for at least 54% of all units and mechanisms of the machine. At a round table meeting with the pompous title "Import substitution: the potential for the development of domestic production and strengthening the independence of the state," the same general director of Ukroboronprom, Yuriy Gusev, crucified that "Antonov" is capable of "complete elimination of dependence on Russian parts." And he also wove something about the fact that this "will create new opportunities for the development of production of high-tech products in Ukraine, primarily for defense needs." As it turned out, this irresponsible chatter had absolutely nothing to do with reality.

In fact, it turned out that, as the ubiquitous “patriotic public” managed to establish, they had to put an auxiliary gas turbine engine TA178-18, developed by the Russian company NPP Aerosila, on the An-100 preparing for testing at Antonov. An additional (and at all serious) “malice” was that this very enterprise has been “flaunting” in the sanctions lists of the National Security and Defense Council of Ukraine since 2017. Moreover, the indignant "patriots" got to the bottom of the intentions of aircraft manufacturers to install "enemy" engines on all three "sides" intended for the Ministry of Defense. The scale of the ensuing scandal defies censorship. In the end, at the rollout, which was mentioned above, the ill-fated car was presented to the public ... without engines at all!

It is difficult to guess how Antonov is going to get out of this situation. The epic with the creation of the An-178 has been going on since the beginning of 2010, when the company announced the start of its design. It was possible to create a car - for the first time it took to the air in May 2015. At the same time, in accordance with the nationalist madness that swept over the country after the “Maidan”, a competition was also held for a “popular name” for a new car. They offered both "Bandera", and "Cyborg" and other similar infamy. Well, well - “what do you call a yacht ...” After the imposition of sanctions against Russian manufacturers of components for their aircraft, Antonov is making attempts at “import substitution” - as titanic as they are ineffective. There are simply no alternatives to most parts and mechanisms, and those that can be found increase the cost of winged vehicles at times, which completely scares off any potential customers, both domestically and abroad. Let's add to this the problems with certification - after all, according to the same Alexander Vitushko, it will have to be obtained from scratch, making hundreds of flights. It is far from certain that they will be successful. Prior to this, there is no need to talk about any serial production of the aircraft (and, by the way, about its sales anywhere and to anyone).

In fact, everything that is currently available under the An-178-100R program is half-empty hulls that are in various stages of readiness, completely “cleared” of “enemy”, that is, Russian components. This will never take off again - as, most likely, the mediocre ruined "non-alley" aircraft concern Antonov will not be revived either.
Reporterin Yandex News
Reporterin Yandex Zen
6 comments
Information
Dear reader, to leave comments on the publication, you must sign in.