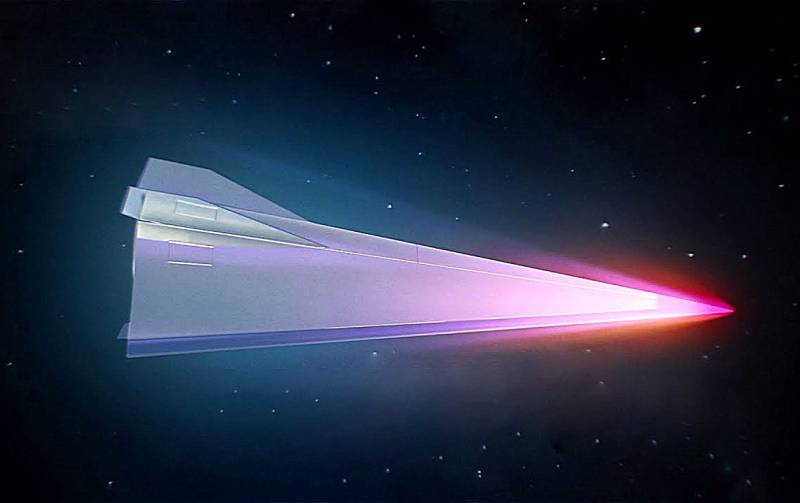 Against the backdrop of the aggravated military-political conflict between Russia and the NATO bloc, the main intrigue is what exactly the Kremlin can present to the West as a “murderous” response to the failure to fulfill its ultimatum. Since no one is waiting for our nuclear missiles in Cuba or Venezuela, patriotic fellow journalists and bloggers call hypersonic weapons as the new “wunderwaffe”, which the United States and its allies are allegedly unable to defend against. But is it really so?


They say that only the money in your pocket is worth counting. Let's see what the real state is in the Russian aviation, army and navy with hypersonic missiles. Usually they talk about "Vanguard", "Dagger" and "Zircon".

This is the first of the “Putin missiles” that actually entered the experimental combat duty. It happened in 2019 in the Orenburg Missile Division. The delivery of hypersonic missiles to the second regiment is expected in 2023. What is known about this type of weapon? 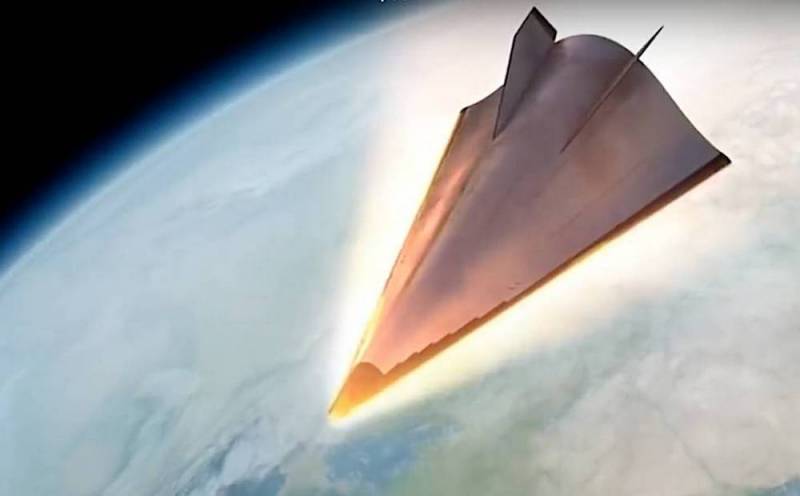 Avangard is a hypersonic guided warhead with a capacity of 800 kilotons to 2 megatons, launched by an intercontinental ballistic missile UR-100N UTTKh. Its main advantage is its phenomenal speed, reaching Mach 27-28, and the ability to maneuver, which makes it almost impossible to intercept it with existing anti-missile systems. Why not a "wunderwaffe"? However, there are spots on the Sun.

So, instead of a multiple warhead with 6 parts of the UR-100N ICBM, UTTKh is forced to carry only 1 Avangard unit, which reduces its effectiveness by 6 times. At the same time, the invulnerability of hypersonic weapons is still somewhat exaggerated: it may take about 50 American SM-3 anti-missiles to intercept the Avangard. This is a lot, but still a hypersonic missile cannot be called irresistible. The high temperature of the flying Avangard simplifies its detection by infrared sensors placed in orbit. If the Americans and their allies launch promising missile defense systems into space, their ability to intercept Russian missiles will increase.

This is another hypersonic missile that has really moved from the stage of "cartoons" to "iron". In fact, the "Dagger" is an air version of the rocket from the Iskander OTRK. Unfortunately, he also inherited his shortcomings. 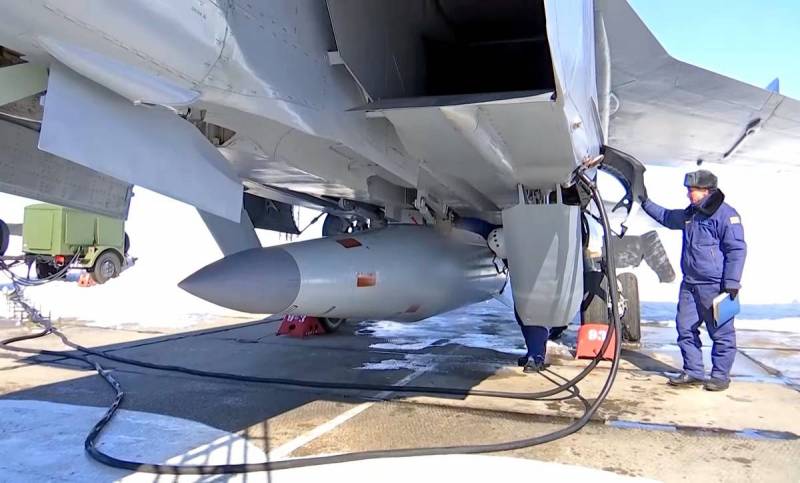 Initially, the domestic media themselves dubbed this missile the "aircraft carrier killer." On paper, everything turned out smoothly: the plane takes off with the "Dagger" on the suspension of the upgraded MiG-31K fighter-interceptor, we add up the flight range of the aircraft and the missile, which gives about 3000 kilometers, the launch is made, and the irresistible "Dagger" hits the deck, the control room, and then the reactor of the American aircraft carrier. The existing sea-based AUG missile defense system of the US Navy is not able to intercept a hypersonic missile. Beauty!

Colleagues just forgot that the Iskanders and, consequently, the Daggers are not able to hit moving highly maneuverable targets. This is an aeroballistic missile without ARLGSN (active radar homing head). It is designed to destroy stationary targets, but the US Navy aircraft carrier from a distance of 3000 kilometers will sink the Dagger only if it stands peacefully at the pier.

At the same time, it should be noted that there is an acute shortage of carriers for these hypersonic missiles. So far, only a few dozen supersonic MiG-31K fighters have been able to convert under them, from which an air regiment has been formed. Also, fighters of the 5th generation Su-57, Tu-22M3M bombers and Tu-160 "strategists" were called as potential carriers, but things are still there. This is all that we have "in our pocket" here and now.

By the way, it is not clear why hang "Daggers" under the Su-57 stealth fighters, depriving them of the advantage in the form of stealth.

Around these hypersonic anti-ship missiles, a lot of copies have already been broken. "Zircons" are hailed to the skies as the next "aircraft carrier killers" and a thunderstorm for the US Navy. At the same time, they forget that this is just an ordinary anti-ship missile, albeit a very fast one. Threatening the Americans with "Zircons" is also too early. 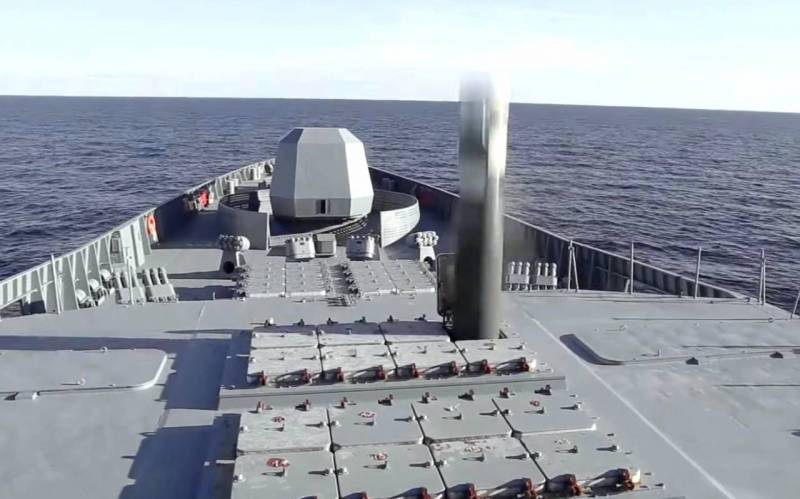 At first, they have not yet been tritely adopted and are not mass-produced. On January 13, 2022, the State Commission only recommended that missiles be adopted by surface ships, reported TASS:

Based on the results of state tests of the Zircon hypersonic missile from a surface carrier, the State Commission recommended that it be adopted by surface ships of the Russian Navy.
Submarines will have to wait until at least 2024, when test launches from submarines will resume.

Secondly, for the above reason, the value of the Zircons for deterring the US Navy will be small due to the extremely modest number of surface carrier ships. These among the ships of the far sea zone in the Russian Navy include the Admiral Nakhimov TARKR after modernization is completed, 22350 frigates of project 3 of the Admiral Gorshkov type, which have already been built, project 1155M BOD Marshal Shaposhnikov, recently turned into a frigate , plus the rest of the large anti-submarine ships and the Peter the Great TARKR after modernization. Not much.

Thirdly, the problem with target designation for Zircons is still not radically resolved. Yes, the Liana satellite constellation is gradually being formed. The devices are launched to a height of 800-900 kilometers, which should complicate their destruction by American anti-satellite missiles, the service life of each is limited to 7 years. But let's not forget that the US Air Force has X-37B unmanned spaceplanes in orbit, capable of long patrols and maneuvering. Such mini-shuttles can pose a potential danger to Russian targeting satellites, incapacitating them to "dazzle" the Russian Navy. As an alternative, for issuing target designation data to Zircons, Caliber and Onyxes, the Russian fleet could use carrier-based AWACS aircraft, but we do not have them as a class and have been declared “unnecessary”.

What intermediate conclusions can we draw?

Disappointing. It is still too early for us to threaten the Americans and their allies with hypersonic missiles.
Ctrl Enter
Noticed oshЫbku Highlight text and press. Ctrl + Enter
Reporterin Yandex News
Reporterin Yandex Zen
111 comments
Information
Dear reader, to leave comments on the publication, you must sign in.