How the US can block China's trade routes to the West 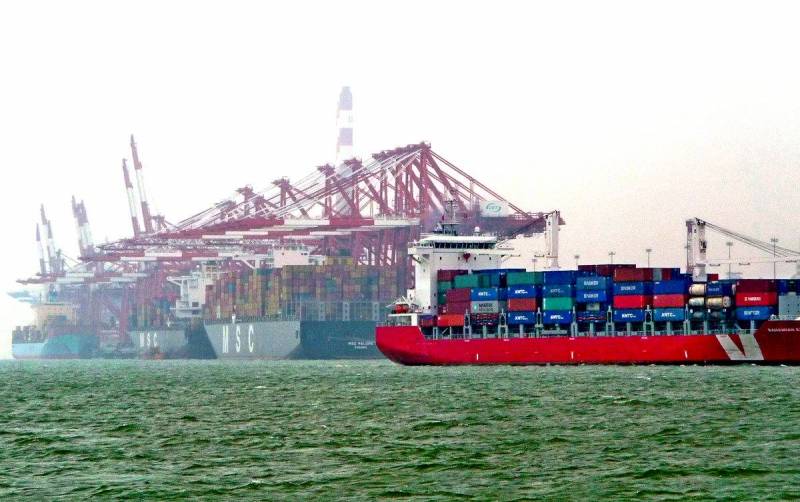 Today, the United States calls China, not Russia, the main threat to its national security. Washington is really afraid not of the Russian "Zircons" and "Sarmatians", but of the Chinese "economic miracle", to which the Americans imprudently themselves had a hand and now do not know what to do with all this. How can the United States neutralize the threat from Beijing?


Obviously, the Celestial Empire owes its fantastic economic growth to the collective West and, above all, to the United States, which opened its richest domestic market to Chinese companies. At first, the Americans developed the PRC as a counterbalance to the USSR, and after the collapse of the Soviet Union, simply because it was very beneficial for transnational corporations that moved their production there for the sake of Asian cheap labor. As it strengthened, Beijing began to play its game, forcing foreign companies to share technology, bought up patents and licenses around the world, actively developed his own education and science.

The result was the ambitious Made in China 2025 program to transform the Middle Kingdom from a “world assembly shop” into a promising global technology leader. By 2021, the total volume of Chinese economics amounted to 18 trillion dollars, the American - 22 trillion. China's growth drivers are its financial sector, the infrastructure megaproject of the New Silk Road, as well as overseas "colonies" in Africa and Latin America. With a population of China under one and a half billion people, the United States really has something to fear. Particularly striking are the successes in military construction, which already now allows the PLA to feel like the main force in the Asia-Pacific region, having moved the US Navy off its usual pedestal.

Yes, the Americans missed the time, allowing the "Chinese dragon" to grow and get stronger. And how now to kill him or take him by the bridle?

In fact, with all the colossal combined military-industrial power, the PRC has many sore points, on which strikes will be delivered, first pinpoint, then on the areas. Paradoxically, the weaknesses of the Celestial Empire are hidden in its strengths.

At first, is the financial sector. The public debt of China began to grow rapidly exponentially since the crisis of 2008. According to some reports, the debt load of the Chinese economy is already 300% of GDP. At the same time, unlike the United States, Beijing does not have the opportunity to shift the burden of its debts to the rest of the world.

The Chinese stock market is now in second place after the US, totaling $13 trillion. At the same time, about 100 million Chinese citizens are constantly actively playing on the stock exchange. If it collapses, then the problem will be of a large-scale socio-economic nature, having "burned" the savings of the middle class.

Secondly, a big problem may be the export of goods produced in the PRC and the delivery of raw materials by sea. Almost all industry is concentrated on the coast of China. The US Navy is theoretically able to organize a blockade of the straits, cutting off the Celestial Empire from markets and sources of supply of raw materials. In this case, Beijing is actively building its own aircraft carrier fleet, but does not fully rely on it. As an alternative to the sea, he is actively promoting his land "New Silk Road" from Asia to Europe. But not everything is fine here either.

China is suspicious of the Turkish president's initiative to create a "Great Turan" right along its Middle Corridor, quite rightly not expecting anything good from the "sultan" flirting with the Uyghurs. In Europe, Lithuania was the first to defiantly refuse to cooperate with the PRC, clearly wanting to become the new “favorite concubine” of the United States among the “Baltic sisters”. If the pro-Western opposition came to power in Kazakhstan as a result of a spontaneous street riot, the promising trade route from the Celestial Empire through Russia to Europe would be cut off.

There is no doubt that the Americans will continue to try to put a spoke in the wheels of China's New Silk Road.

Thirdly, it is obvious that the United States will try to destroy the "colonial empire" carefully built by Beijing. The PRC has already invested heavily in resource extraction and other infrastructure projects in Africa and Latin America.

The coup d'état in Guinea, extremely rich in high-quality iron ore, may well be considered the first "bell". Guinea was urgently needed by China to diversify supplies from Australia, which has become openly hostile. It's only the beginning.

FourthlyThe United States and its allies have already frankly begun to promote the "fertile" topic of human rights violations in the Xinjiang Uygur Autonomous Region, where the predominantly Muslim population is not too loyal to Beijing. Problems may follow in Tibet. The UK has strong leverage over the situation in Hong Kong.

In order to weaken the PRC and impose Western sanctions against it, the Americans may well provoke and unleash a new “Chechen war” in one of these difficult regions.

Fifthly, let's not forget about Taiwan, which we have taken out in a separate paragraph. This island is the place where the US and China can collide with each other not only indirectly, but also directly. In the medium term, both sides benefit from pre-war militarization, which allows them to actively develop their military-industrial complex, a powerful economic driver. But in the future, when the “client matures,” the Americans may well provoke Beijing into trying to return Taiwan by force. What will it give them?

For example, the ability to force European allies to impose economic sanctions against China, up to the embargo of Chinese goods. This will allow the US to reset the results of the Made in China 2025 program by closing Beijing's trade gates to the West.
Ctrl Enter
Noticed oshЫbku Highlight text and press. Ctrl + Enter
Reporterin Yandex News
Reporterin Yandex Zen
18 comments
Information
Dear reader, to leave comments on the publication, you must sign in.