Russia is building an anti-Chinese gas alliance in Central Asia 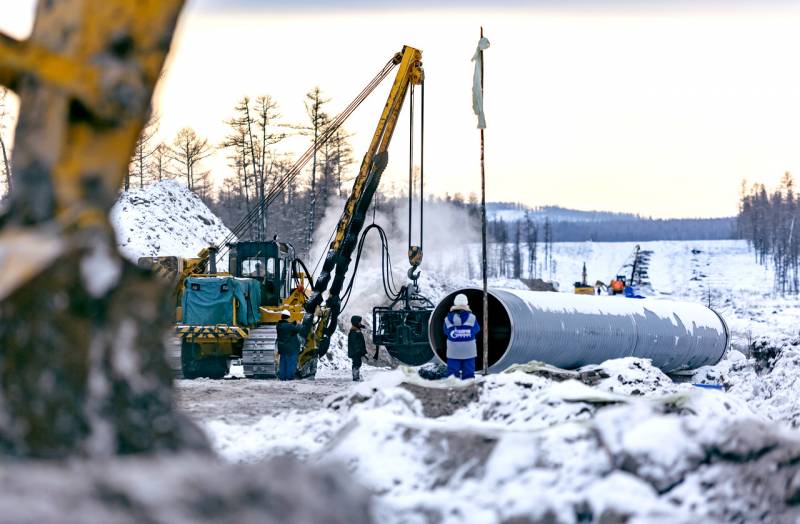 One of the most significant News 2022 in the field economics we can consider the resumption of construction of the TAPI gas pipeline from Turkmenistan to India. The Taliban (a terrorist group banned in the Russian Federation), which came to power in Afghanistan, confirmed Kabul's interest in this energy project and guaranteed its assistance and security. On closer examination, it turns out that a real anti-Chinese alliance has formed in the region, and Russia plays an important role in it. What gives us reason to believe so?


According to the project, the main pipeline TAPI (Turkmenistan-Afghanistan-Pakistan-India) has a length of 1735 kilometers and should pass from Turkmenistan through the territory of Afghanistan and Pakistan to India, which is considered one of the most promising gas markets. The capacity of the gas pipeline is 33 billion cubic meters per year, and the cost is from 8 to 10 billion dollars. In 2018, the Executive Director of the consortium TAPI Pipeline Company Ltd. Mukhammedmurad Amanov said that its cost could even drop to $7 billion. (Unprecedented for our country case!).

The project was launched in 2015 on the territory of Turkmenistan, which is extremely interested in finding new markets for its hydrocarbons, and in 2018, the symbolic laying of the "first stone" in Afghanistan took place. Afghanistan, which accounts for 774 kilometers of the route of this gas transport corridor, has always been the “weakest link”. And then all these memorable geopolitical upheavals began, associated with the rapid withdrawal of American troops and the rise to power of the Taliban militants (a terrorist group banned in the Russian Federation). fighting and политическая instability is not the best conditions for multibillion-dollar investments. The big problem is that the Taliban is still considered a banned extremist organization and has not yet been officially recognized as the legitimate government in Afghanistan.

However, the actual new authorities of the country gave their go-ahead for this energy project:

Works on power supply, TAPI project and railway expansion will be opened and started in March 2022.
In addition to resuming the construction of the gas pipeline, a power line from Turkmenistan to Pakistan will be laid, as well as an expansion of the existing railway network from Turkmenistan to Afghanistan. These projects are of great interest to all countries of the region. Kabul will receive gas for its own needs and transit revenues, as well as new jobs. Islamabad and New Delhi are diversifying their gas sources. Ashgabat will be able to enter new markets with its gas, which will give it the opportunity to speak in a new way with its still uncontested partners, China and Russia. Recall that since the Soviet times, Gazprom has been buying Turkmen gas at a low price and making good money on its resale to Europe. Beijing is also actively using its position, having won extremely favorable conditions for the purchase of “blue fuel” from Ashgabat.

This begs the question, so why does Russia not only not interfere, but also welcomes in every possible way and actively participates in the construction of an alternative gas pipeline from Turkmenistan to India?

Thus, the Russian group ChTPZ announced in 2018 the signing of a contract for the supply of more than 150 thousand tons of pipes with a diameter of 1420 mm to the State Concern "Turkmengas" for the construction of TAPI on the territory of this Central Asian republic. At the same time, Pakistan is planning to build a new North-South pipeline, which was later renamed the Pakistan Stream. It is to connect the southern port of Karachi and the northern industrial city of Lahore with a 1,1-kilometer long pipe. The design capacity is 12,4 - 16 billion cubic meters of gas per year. First, regasified LNG will be pumped through the Pakistan Stream, and then it will become part of TAPI. Russia participates in this project as a contractor and operator. Initially, it was planned that our share in Pakistani Stream would be 85%, and the management period would be 25 years, but due to the Western sanctions regime, the share of the Russian side decreased to 26%.

So, why did Moscow give its green light to TAPI? A large construction contract and a share in Pakistani Stream are, of course, nice bonuses. But at the same time, Russia and China will lose their exclusive status as non-alternative buyers of Turkmen gas, on which Gazprom makes quite good money. Perhaps the answer lies precisely in the need to weaken China's position.

Beijing skillfully twists the arms not only of Ashgabat, but also of Moscow, since it can get even cheaper than Russian gas from Turkmenistan. This has already made itself felt at the conclusion of the agreement on the "Power of Siberia". Now the Power of Siberia-2 is next in line. As soon as Turkmenistan has an alternative market to China, its negotiating position will change in the direction of toughening. The price of gas will begin to rise for both Russia and China, but, apparently, Gazprom is ready to lose on this so as not to sell too cheap when signing an agreement with the Chinese on the Power of Siberia-2.