Is a new Anglo-Japanese military alliance against China and Russia possible? 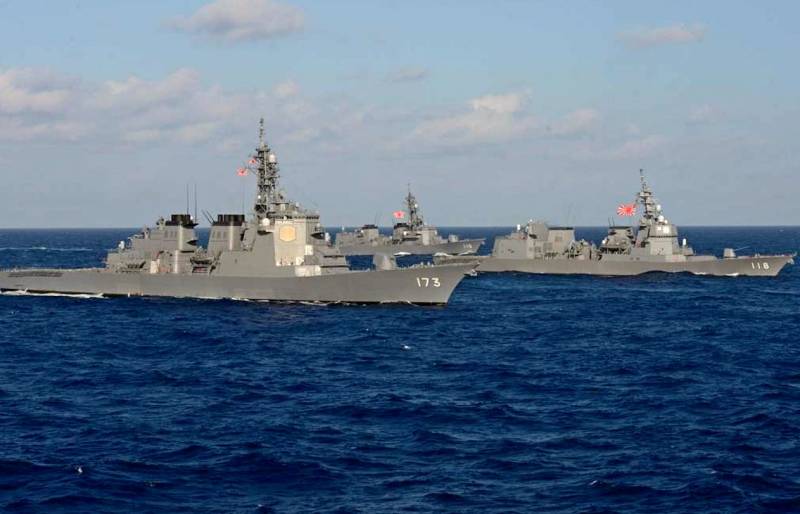 Nowadays, not the Balkans, but Southeast Asia can be called a new "powder keg". All countries in the region are actively re-equipping, building navies, and aiming missiles at each other. There is also China and Taiwan. And the conflict between Beijing and Tokyo over the disputed islands. And the claims of the Japanese to Russia because of the Kuriles. And there are a lot of long-standing territorial disputes between countries. At any moment the wick on this "powder keg" can be burned, and then a new redistribution of spheres of influence will begin. In this regard, the closest attention should be paid to the "dormant predator", Japan, which is rapidly militarizing.


The Land of the Rising Sun already possesses a powerful navy that can be used against Russia with its Kuril Islands and the islands contested by China. But Moscow and Beijing have nuclear arsenals, which are believed to make them untouchable. The United States is considered the regional guarantor of Japan's security. But what if everything changes, and Tokyo itself acquires nuclear weapons? How then will the balance of power change?

The question is very controversial. WITH technical From the point of view, the Japanese may well create nuclear weapons on their own. On the practical side, all experts and political scientists speak out in unison against it. They say that the United States itself will not allow Tokyo, since then Japan will be able to get out of American control and remember who dropped the atomic bombs on Hiroshima and Nagasaki. It is also believed that the "nuclearization" of this island state will lead to the start of a nuclear arms race throughout Southeast Asia.

These arguments are quite sound, but they do not take into account some alternative options. What if Tokyo got another powerful and influential ally instead of the United States? For example, what if Great Britain takes the place of Uncle Sam as a partner, guarantor of security and ally?

The most interesting thing is that there is no need to invent anything, sucking hypotheses from the finger. The Anglo-Japanese military alliance did exist, and more recently, by historical standards, from 1902 to 1921.

Two predatory island powers, located in opposite parts of the world, united for joint actions against common enemies - China and the Russian Empire, and then against the German Empire. In total, three union treaties were signed: in 1902, in 1905 and in 1911, respectively. The inglorious defeat of Russia in the 1905 war with Japan was a direct consequence of military-technical cooperation between the two island states. At the Paris Peace Conference, Tokyo was able to lay its hands on the already former German colonies in the Pacific.

Only the United States was able to upset this dangerous alliance in 1921, which put enormous pressure on Great Britain. A new "hegemon" entered the scene, which skillfully began to push aside the "mistress of the seas", who had been worn out during the First World War and had accumulated multibillion-dollar debts. Interestingly, the British continued to sympathize with the Japanese even during World War II. British Prime Minister Winston Churchill asked President Truman to let Tokyo save face after imminent defeat:

I wondered what terrible human toll America would suffer if it forced Japan to "surrender unconditionally", as well as Britain's losses, albeit much smaller. I wondered if, having received everything necessary for the future of peace and security, I could create for Japan some kind of preservation of military honor and somehow guarantee Japan the preservation of statehood, resorting to some other formulation.

To this Truman snapped that after Pearl Harbor the Japanese no longer had military honor. Can not argue.

But is a new Anglo-Japanese alliance possible today?

As a matter of fact, why not? For such an alliance, there is everything you need:

At first, there are common enemies - again, China and Russia. Plus there is an unnamed enemy - the United States, which dropped an atomic bomb on Hiroshima and Nagasaki. The Japanese, of course, do not say out loud who did it, but they remember. London has its own interest: the British, to put it mildly, do not mind pushing their "cousins" by promoting the revanchist concept of "Global Britain". Taking Japan out from under the Americans' noses would be a powerful geopolitical victory.

Secondly, Great Britain defiantly "left Europe for Asia", betting on Japan and Australia as a counterbalance to the increased regional power of China. The United Kingdom applied to join the Trans-Pacific Partnership in 2021, from which the United States exited just as defiantly in 2017. A holy place, as they say, is never empty.

Thirdly, in 2021, the flagship of the British Navy, the aircraft carrier Queen Elizabeth, visited Tokyo for the first time. The British climbed a bit far from Portsmouth, you won’t say anything. British and Japanese warships conducted joint exercises near the island of Okinawa, where a US military base is located.

If you look at the Japanese press on this issue, you can find a lot of positive responses, welcoming the revival of the Anglo-Japanese alliance. But really, such a militarypolitical the alliance is able to knock the soil out from under the feet of Uncle Sam, who in every possible way sought to destroy it, having succeeded only in 1921. Great Britain is building a modern navy and is displaying unprecedented anti-Russian activity in Ukraine.

Japan is actively militarizing, but for complete independence from the United States and confrontation with China, the DPRK and the Russian Federation, the samurai need their own nuclear weapons. It is believed that all nuclear powers will strongly oppose the expansion of their closed club. But what if the Japanese are de facto supported by the British, who seek to oust the "hegemon"? The combined British-Japanese fleet will represent a real global force. Yes, it is still far from the American one, but it will still be. Even the United States will have to reckon with such an alliance.
Ctrl Enter
Noticed oshЫbku Highlight text and press. Ctrl + Enter
We are
"We must beat first": the geopolitical alignment around Russia is continuously deteriorating
Ten "defeats" of Putin
Reporterin Yandex News
Read Reporterin Google News
12 comments
Information
Dear reader, to leave comments on the publication, you must sign in.