BDK or UDC: Which landing ships are needed more by the Russian Navy 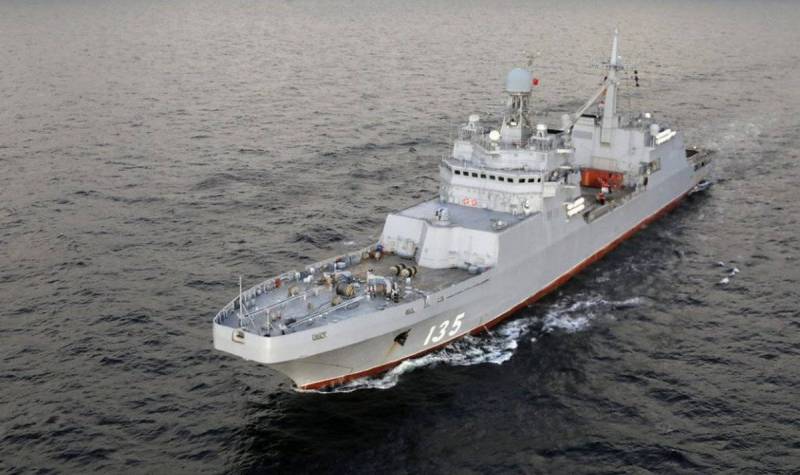 It is reported that at the Yantar shipyard in the Kaliningrad region, the outlines of the hulls of two new large landing ships of Project 11771 began to take shape. long-suffering large landing craft "Ivan Gren". The Russian Navy should receive them by 2019. But does the modern fleet need ships of this class, or is their time long gone?


To call the lead ship of the 11711 series long-suffering was no exaggeration. The Russian amphibious fleet consists of old Polish and Soviet-built large landing ships, projects 775 and 1171, respectively. The need to replace them, as they say, has long been overripe. Almost all small and medium landing ships have been withdrawn from the Russian Navy due to wear and tear. On the basis of the quite successful project 1171 "Tapir", the Nevsky Design Bureau developed a new large landing craft "Ivan Gren".

Unfortunately, this project has become a real long-term construction. Initially, it was planned to create a landing ship capable of navigating rivers and internal canals. Then they began to convert it into a ship of the far sea zone, significantly increasing the displacement. Affected by chronic underfunding, because of which the construction site was frozen for a long time. The customer's technical requirements were constantly updated, forcing to make all the new changes to the project. As a result, the “Ivan Gren” laid down in 2004 entered the fleet only in 2018. At the same time, the second ship of the "Pyotr Morgunov" series was commissioned, laid down in 2015 on the basis of the lead's experience.

The total displacement of both large landing ships is 6600 tons, which makes them the largest surface warships built in the modern Russian Federation so far. At a time, each of them can transfer up to 13 main battle tanks, up to 36 armored personnel carriers or armored personnel carriers, up to 30 trucks, or up to 300 marines. It is believed that the conditions for the personnel are much better than that of the previous project, which experienced people called "cattle". The deck can accommodate 2 transport and combat helicopters of the Ka-29 type or 1 reconnaissance and attack helicopter of the Ka-52K type. The ships are armed with several artillery mounts and heavy machine guns. They are also technically adapted to the function of setting minefields, which is a useful bonus.

In 2019, it was decided, within the framework of project 11771, to build 2 more modernized ships compared to the lead ship. The total displacement of the Vladimir Andreev and Vasily Trushin has been increased to 8000 tons, the maximum speed will remain the same - 18 knots. Each of them will be able to take on board up to 40 units of armored vehicles or 400 marines. The air wing will also grow to 5 helicopters. The delivery of the BDK is expected in 2024, both of them, which is remarkable, will go to the Pacific Fleet, closer to the Kuril Islands.

Thus, despite a lot of problems, the 11771 project can be considered quite successful. But what will be their real role? Landing from a large landing craft involves disembarking either directly ashore, or by means of a special engineering pontoon through the open bow doors of the ship. Light amphibious armored personnel carriers and infantry fighting vehicles can themselves go down into the sea and independently reach the coast. The problem is that this method of landing on unequipped coastlines has long been outdated.

BDK, approaching at low speed to the coast, is an easy target not only for anti-ship complexes, but also for conventional cannon artillery and even mortars. An actively defending enemy is able to turn the amphibious assault into a real "bloodbath". Opening and suppressing all gun emplacements on the coast in advance is a very non-trivial task. It is highly desirable to have reconnaissance and strike aircraft, which will need to be brought with you in order to conduct radar reconnaissance, provide data for target designation to ship-based and air-based missiles, and suppress positions with aerial bombardment.

Alas, the BDK concept itself is now considered outdated. What is the trend today?

During the Vietnam War, the Americans were faced with the urgent need to ensure rapid landing and operational control of the landing process from a distance safe from the coastal artillery fire of Vietnamese patriots. As a result, the concept of a universal amphibious assault ship was developed, which, being at a distance of 25-30 kilometers from the coast, was able to land an expeditionary battalion of the Marine Corps from technique, support it with helicopters and carry out general coordination as a command ship.

The first American UDC was the Tarawa type, followed by the Wasp series, which is now being gradually replaced by the America type. Similar ships are being built in France, Turkey, Australia, Spain, South Korea, China and Japan. The first Russian UDCs were supposed to be the French Mistrals, built according to the standards of the Russian Ministry of Defense, but because of the US sanctions they never got to us, eventually ending up in Egypt. To replace them, a project 23900 was developed, and in 2020 two domestic universal amphibious assault ships were laid down at the Zaliv plant in Kerch. Mitrofan Moskalenko has been designated as the future flagships of the Black Sea Fleet, and Ivan Rogov will go to the Pacific Fleet, where, possibly, it will also replace the aging cruiser Varyag as a leader.

This can undoubtedly be considered a major breakthrough for the Russian navy. However, it is somehow difficult to imagine the flagships leading the real amphibious assault on the actively defended hostile coast. Their loss will become an irreparable loss for the Russian Navy. To send the large landing ships without proper preparation is to deliberately use them up. Without air wing cover for carrier-based aircraft, such an operation would turn into a real gamble.

The bottom line is that the Russian Navy needs more UDC than the two voiced ships. Airborne support of the amphibious assault by carrier-based aircraft is also highly desirable. Large landing ships in a real combat operation will go only in the second echelon, when the coast has already been properly "ironed out" and cleaned out. The rest of the time, the BDK is destined for the role of a "cab" for the delivery of military equipment, for example, within the framework of the "Syrian Express" or similar campaigns. In other words, they are needed, but just as "workhorses".
Ctrl Enter
Noticed oshЫbku Highlight text and press. Ctrl + Enter
Reporterin Yandex News
Reporterin Yandex Zen
14 comments
Information
Dear reader, to leave comments on the publication, you must sign in.