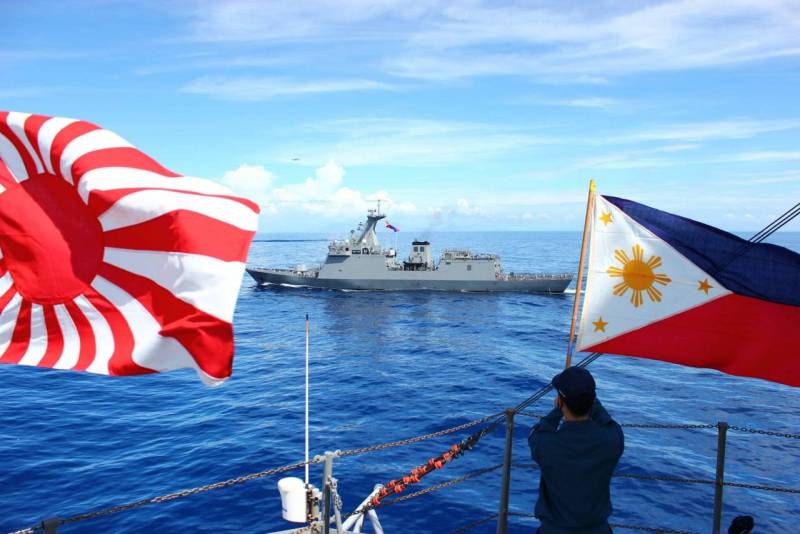 While in November-December last year, the world watched what was happening on the Polish-Belarusian and Russian-Ukrainian borders, worthy of attention news quietly came from the Asia-Pacific region.


Back in the twentieth of December, impressive photos of the construction of a new military unit of the Japan Self-Defense Forces on Ishigaki Island, which is located two hundred kilometers from Taiwan, appeared on the Internet. In the future, Tokyo plans to place anti-aircraft batteries here, as well as coastal anti-ship systems. It is noteworthy that even now the largest Coast Guard base in the country is located on Ishigaki, which formally does not belong to the Ministry of Defense, but to the Ministry of Infrastructure, Transport and Tourism. Now patrol ships will be reinforced from land much more solidly.

In parallel, the largest civil defense exercises were already held in the Chinese province of Fujian, which, in fairness, included large-scale power outages in residential areas and industrial centers. The implied subtext of what is happening is obvious. Fujian is located just opposite Taiwan, and at the beginning of hostilities in the strait, invasions of saboteurs should be expected not only by Taiwanese, but also by continental residents.

All these events, and many others that would take a long time to list, implicitly indicate that escalation in the region is in danger of starting in the foreseeable future. And even sooner than is commonly believed in the expert community.

"Partners" from the north and from the south

In the context of the aggravation of the “Taiwan issue”, it is obvious that both for Beijing and Washington it is important that Japan and the Philippines (located to the north and south of the island of Taiwan, respectively) remain, if not neutral, then at least non-belligerent partners of the United States.

The Celestial Empire is not interested in airfields and ports on the islands closest to Taiwan being used against it. In addition, the involvement of someone other than the US-Taiwan-PRC triangle in an open conflict is undesirable for many other reasons.

To be frank, the United States itself hardly has plans to operate directly from the islands of the Philippines or Japan either. Although they are geographically much more convenient than Guam or the Northern Marianas, it is also much easier for continental China to get neighbors with DF-21 ballistic missiles. Therefore, the role of a non-belligerent ally in the person of Tokyo or Manila is more preferable.

The most typical example of the usefulness of partnership in this format is the closest to the Taiwanese coast (a little over a hundred kilometers), the Japanese island with a permanent population - Yonaguni. Initially, there was no military presence there, but a few years ago, a full-fledged garrison and a J / TPS-102 radar were suddenly placed on this land to control the nearest airspace.

Yonaguni is also ideal for the safe placement of an American hospital where the wounded from the conflict zone will be delivered (under the conditions of at least formal internment).

To the south of Taiwan is the Philippine counterpart of Yonaguni, Mavulis Island, where the local military has also recently built a base and the associated infrastructure it needs. The reason is the same - China.

It is noteworthy that not far from Yonaguni and Mavulis are the most important trade routes between Europe and Asia, as well as between the Asia-Pacific region and the Middle East, where oil and LNG come from.

The fundamental interest of the Japanese and Filipinos is understandable - not to become a target for the Celestial Empire, while remaining unambiguous allies of America. However, how long the two island states will be able to maintain their formal neutrality with further escalation is still a big question.

Therefore, both Manila and Tokyo are obviously preparing for the fact that their non-belligerent status will not become a defense, and in this case they will have to advance into battle without any “buts”.

It is much easier with the Philippines - this country simply does not have enough budget for a decent armed forces. For example, ten years ago, neither the Navy nor the Air Force actually existed, which for an island nation with a hundred million population is an obvious threat in itself.

However, the situation has not changed much over the years. The few warships that were received after 2012, as well as the 10 F-16 Block70/72 fighters planned for purchase, are unlikely to deter the Chinese for long, even taking into account the advantage of the “home field”. In other words, the defense of the Philippines, as in the "glorious" colonial times, is likely to fall on the shoulders of the Americans.

The only advantage of the Filipinos is the rich combat experience of the war in the jungle. Possibly the best in the world. However, the experience is specific, and it concerns mainly the fight against the partisans.

Threatened by blockade and starvation

With Japan, the situation is different. Today, its self-defense forces are already aimed precisely at preventing a naval blockade, and not at all at landing operations “somewhere in the north”, as for some reason it is commonly believed in our country in connection with the notorious territorial dispute. The Land of the Rising Sun has not built a single large landing ship since 2003 (while scrapping as many as nine units since 1995), but has invested resources in dozens of destroyers, frigates and submarines.

Apart from the moderately powerful Navy, a whole arsenal of other means is provided for naval warfare. Including Joint Strike Missile (JSM) air-to-surface missiles for the F-35 fighter, as well as Long Range Anti-Ship Missile (LRASM) for the upgraded F-15J and ASM-3 for the F-2. Coastal batteries with anti-ship missiles Type-88 are also worth a special mention.

The issue of preventing a naval blockade is not at all idle. With a similar area, Japan, unlike Germany, cannot actively promote agriculture - in a predominantly mountainous country, there are too few suitable plains for this. That is why a significant part of the diet in the national cuisine is occupied by seafood - such dependence appeared by no means from a good life.

As a result of territorial losses after the Second World War, the Japanese took measures to recapture new lands from the water - specifically for agricultural needs. For example, this is how the Ogata district is built, completely built on the site of a drained lake with the help of European specialists.

However, this did not solve the food problem. Japan remains critically dependent on maritime supplies from other countries, as well as on the work of its own fishers. Without these two terms, famine will come in the country.

Thus, according to the US Trade Mission, the total volume of exports of agricultural products from the United States alone to Japan in 2020 is estimated at $ 11,8 billion - this is the fourth most important market for agricultural products. Main export categories: beef ($1,9 billion), corn ($1,8 billion), pork ($1,6 billion), soybeans ($1,1 billion) and wheat ($635 million) ).

In addition, food products are actively purchased in Brazil, Mexico and other countries, and Japanese food standards themselves are more than strict. Every year in the Land of the Rising Sun, a lot of perfectly suitable food is utilized, from a number of sources, enough to feed all of Central America to the full. This happens simply because the formal, but not the actual expiration date has expired, which can be extended if “special circumstances” arise in the state.

In other words, even with a complete naval blockade, Japan can exist without the threat of starvation for some, but still a limited time. In this sense, the task of the military is to prevent the complete isolation of the country from the outside world.

On the whole, both Manila and Tokyo are conducting a quite reasonable policies for states whose geography provides little room for maneuver. The position of small and medium-sized countries at all times has remained extremely difficult: they bore all the hardships in a global clash, but received little in case of success if they bet on the right side. The only option for such states is adequate militarization, which, in fact, is happening.

Russia, on the other hand, is not directly affected by the events around Taiwan, although the presence of common borders with China, Japan and the United States implies a certain level of vigilance. After all, our merchant shipping also depends on peace and tranquility in Asia and the Pacific.
Ctrl Enter
Noticed oshЫbku Highlight text and press. Ctrl + Enter
Reporterin Yandex News
Reporterin Yandex Zen
Information
Dear reader, to leave comments on the publication, you must sign in.