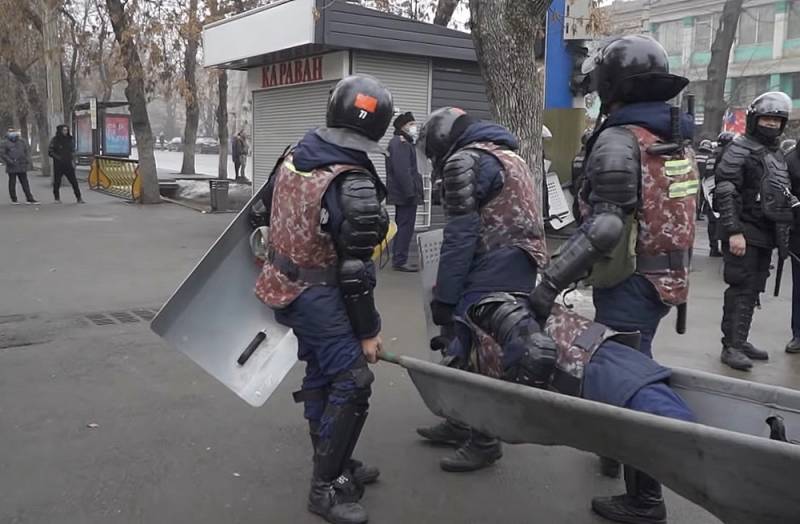 Events in the modern world are changing at a truly kaleidoscopic speed. Or does it just seem to us that, since the moments we are observing are just “final shots” and the final results of multi-pass combinations, the planning and development of which was invisible to everyone? At the time of this writing, there are still reports from Almaty about the ongoing "cleansing" operation in the city from pogromists and terrorists, periodically turning into real street battles.


However, in spite of the fact that the local tragedy is still very far from its end, it is already possible to assert with full confidence: the destructive forces that caused this bloody hell suffered a crushing defeat. Moreover, in this situation we are talking not only about the failed attempt of the next "color" coup d'etat, but about much more serious and global things.

Instead of weakening Russia's positions in the upcoming negotiations with the United States and NATO, which are fateful for the whole world, the crisis in Kazakhstan, or rather the paths that have already been chosen to resolve it, are strengthening them many times over. An effect has been achieved, not just directly, but a multiple of the opposite to what the organizers of the "Maidan" hoped for. It will definitely be easier for the representatives of our country to talk about ensuring peace and security in the “post-Soviet space” after such an impressive demonstration of their own capabilities in this matter. The "Collective West" has already suffered a second failure in recent years, striving to use its favorite and, as it seemed until recently, completely reliable "colored" weapon. The whole world sees that in addition to Sputnik-V, Russia, it seems, has acquired a vaccine against this infection. Well, as the "main prize" our Western "friends" received the "resurrection" of their main nightmare of the Cold War era - an effective military alliance directed against them with our country at the head.

Before moving on to the main, so to speak, part of the question, it is impossible not to mention that the Kazakh "Maidan" seems to be somehow "wrong". Or rather, even atypical. Usually, all activities of this kind are carried out according to the same type of "manuals" to nausea. However, in Almaty and other populated areas of the country covered by supposedly "spontaneous" protests, the standard action characteristic of all "color revolutions" performed according to transatlantic scenarios did not unfold.

In its process, everything seems to start with peaceful demonstrations, and only after a while does it come to bloodshed, pogroms and terrorist seizures of government bodies. According to standard templates, the rioters should have stomped on the square for some time, built a whole town of tents (or yurts - in accordance with the local specifics), chanted stupid slogans (suspiciously the same on every "Maidan", wherever it took place), put forward authorities knowingly impracticable requirements. "Suffer from police brutality" - naturally, on cameras. Well, and only then, having shoved over-aged loafers who are pretending to be "children" under police batons and water cannons and having received the appropriate "correct picture" for Western TV channels, move on to what, in fact, everything was started for - to the violent seizure of power. And it is more active to throw up our hands at the same time - they say, we didn’t want anything like that, but the “criminal regime” with its “atrocities” provoked the “people” to violence. Which, of course, was "reciprocal." In this case, all these "preludes" flashed, as if captured by accelerated shooting. "Fighters for Democracy", not even having time to properly get rid of the law enforcement officers, turned into armed gangs of pogromists and marauders.

Two versions can be put forward as to why this happened. Quite possibly, in this case there was a well-known to all investigators and judges "kurtosis of the performer" - when the thugs hired to perform certain actions forget about the scenario prescribed by the customers and go all out. This testifies to the fact that the employees of specific "offices" from the United States, who have been spinning in this region for more than a decade (in Afghanistan, at least), have not comprehended the elementary truth that was revealed to the ordinary Red Army soldier Sukhov: "The East is a delicate matter ...". And, as a result, they let things go on their own, being content with only pulling out the cork from the notorious bottle with an extremely vicious and completely inadequate "genie". Otherwise, it should be assumed that the haste (which had January 10 as a "deadline") was so great that it was decided to dispense with ceremonies in the device of the coup and go ahead. Personally, both the first and the second options seem quite plausible to me. In favor of the assumption that “something went wrong,” the statements of some Westerners, primarily the United States, which clearly do not correspond to the current moment, work perfectly.

Well, Psaki with her demands to the authorities of Kazakhstan and representatives of the CSTO, who is trying to restore order in this bloody mess of the CSTO, "unconditionally observe all international obligations regarding human rights and freedoms," did not surprise anyone. In fact, no one is surprised at her for a long time. But the statement of the UN High Commissioner for Human Rights Michelle Bachelet about the need to "unconditionally release" every single participant in the bloody riots and pogroms in Kazakhstan on the basis that they "exercised their right to peaceful protest" is something! Something beyond good and evil, in my opinion ... The lady, apparently, is not aware of dozens of killed military and police officers, including those found with their heads cut off ?! About hundreds of their colleagues wounded by "peaceful demonstrators"? Obviously, the statement was prepared ahead of time, but they did not think of correcting it, or, even better - keeping silent. Otherwise, we should talk about an unconditional clinic that cannot be treated.

The Collective Security Treaty Organization, created in 1992, undoubtedly cannot be compared with the military alliance of the socialist countries, which served as a counterweight to NATO for many decades. In terms of the number of participating states, the gap is not so great, but the fact is that during the times of the Internal Affairs Directorate, the number of the combined forces of which in 1987 reached 6 and a half million people, they were all part of the USSR. Moreover, having found themselves in the status of independent, the former Soviet republics continued to settle scores and sort things out within the framework of international organizations of the “post-Soviet space”. Thus, Georgia and Azerbaijan withdrew from the CSTO. Uzbekistan generally ran back and forth - in 1999 it left its ranks, in 2006 it returned, in 2021 it “slammed the door” again. Kyrgyzstan was not too happy with its membership in this union, which was denied military assistance during the civil confrontation that unfolded in this country in 2010.

Well, and even when serious tensions began between the two states that make up the foundation of the CSTO - Russia and Belarus, many prepared to light a candle for her repose. Until now, the image of this alliance has been negatively affected by the fact that, despite the rather long period of its existence, the states and their armies have not carried out a single joint military or peacekeeping operation. Joint action to suppress drug trafficking, exercises and many meetings of generals and ministers are certainly good. However, the true fighting brotherhood is forged exclusively in powder smoke, and not at the tables of summits and conferences, even if they are devoted to issues of collective security.

It is not known how the situation would develop further. Perhaps destructive processes would continue in the CSTO, which would ultimately reduce this organization to military cooperation between Minsk and Moscow, thereby making it a meaningless "backup" of the Union State. However, the disaster that broke out in Kazakhstan did not just give a new meaning to the Organization - the events there, truly, breathed life into it and allowed it to move to a completely different level! The Kazakh leader's appeal to the highest body of the CSTO, the Collective Security Council, was considered not only without the slightest delay, but, one might say, with lightning speed. The first Russian paratroopers arrived in the country literally in a matter of hours. First of all, this means that in the field of intelligence and tracking of crisis situations, the Stars and Stripes opponents still have to learn and learn from us. No, everything is clear - the "winged infantry" must always be ready to rush to carry out a combat mission, as they say, flying in. But how quickly, professionally and smoothly the transfer of peacekeepers was organized, says, you will agree, about a lot. At the very least, they didn't manage to catch Moscow by surprise.

There is a certain symbolism in the fact that the official decision to send a united peacekeeping contingent to Kazakhstan was announced by the Prime Minister of Armenia Nikol Pashinyan, who is currently the acting head of the Council. Everyone remembers perfectly well that this leader came to power precisely as a result of the “Maidan” (though definitely much more “civilized” than the events in Almaty). However, it is also axiomatic that in the process of the armed conflict in Nagorno-Karabakh, Armenia was saved from the final defeat solely by the will of our country. Apparently, Pashinyan is aware of this. Moreover, he intends to continue to enjoy the intercession and support of Russia, without denying this right to others.

The disgraceful flight of the American army from Afghanistan was a geopolitical failure of the United States, which called into question its viability as an ally and "senior partner." For the final completeness of the picture, the only thing lacking was the appearance of a real alternative to military cooperation with the Americans. And then she appeared - in all, so to speak, glory. Do not forget that Serbia and Afghanistan are present in the CSTO Parliamentary Assembly as observers. Iran is showing a clear and consistent interest in it. An interesting alignment is emerging, isn't it? And who said that over time this Organization will not become many times stronger and more numerous than the Department of Internal Affairs, which has long been a thing of the past? In any case, the introduction of the peacekeeping contingent in Kazakhstan made the first step in this direction.
Ctrl Enter
Noticed oshЫbku Highlight text and press. Ctrl + Enter
Reporterin Yandex News
Reporterin Yandex Zen
63 comments
Information
Dear reader, to leave comments on the publication, you must sign in.