The entry of Russian troops into Kazakhstan looks hasty 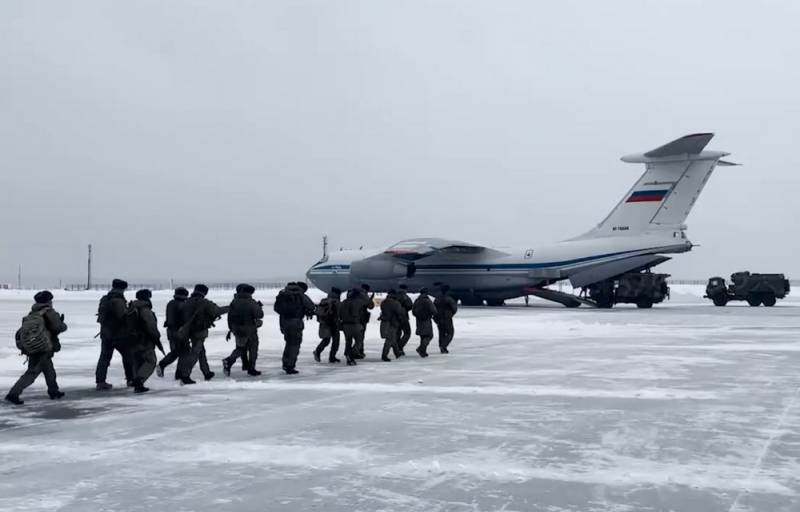 Kazakhstan is gripped by mass unrest due to a sharp jump in gas prices. Tokayev has already dismissed the government, promised to lower prices and removed the Chairman of the Security Council Nazarbayev from the post, but the unrest escalated into riots and pogroms, the protesters demand a change of the regime. The CSTO, at the request of the President of the republic, introduces a peacekeeping contingent.


What are we seeing: another attempt at a color revolution on the borders of Russia and China, or a just people's movement? Many even here remember well the bloody events in Zhanaozen, which are now perceived by the protesters as a prologue to the current attempt to overthrow the government.

What is the essence of the policy of color revolutions?

During the Cold War, the United States developed and tested in detail the doctrine of the "fifth column", that is, a system of measures to grow, support and manage the opposition in disloyal countries, the purpose of which is, firstly, constant pressure on an unwanted government, criticism of the fact that it does not correspond to "Western standards", and secondly, the change of persons in power for pro-Westerners. Within the framework of this doctrine, the scenario of the color revolution is applied, when the "fifth column" is being prepared for the role of the headquarters of the uprising. In the event of a crisis, this impromptu headquarters actively escalates the situation, provokes speeches, rallies and processions. In the event of a spontaneous uprising, he tries to translate the activity of the masses into the channel of the Maidan regime change. Technique coups d'état at the Americans was worked out meticulously, but the most competent governments gradually found ways to counter the "color threat".

The meaning of this doctrine lies in the hegemonism of Euro-Atlantic imperialism. Initially, all this was worked out in the socialist states and left-nationalist regimes of Latin America and Africa, but after the collapse of the USSR it is applied everywhere. The United States wants to dominate the world, therefore it is not interested in the development of poor and backward countries, and even more so in states that are capable of making them global competition. The United States wants to see the rest of the world as a cash cow for its corporations. And the most tragic thing is that the American people in many ways share this hegemonism of the ruling circles, they gradually became a reactionary people in the XNUMXth century.

The strategic goals of American and with it European imperialism are no different from those of Hitler. They are driven by the desire for world domination; only the means and methods of achieving it differ. And under this political motive, there is an objective law of competition underlying the market economics... Roughly speaking, American and European capital craves a monopoly position in the world, a total suppression of all competition and maximization of income.

Today, in the context of the Cold War unleashed against China, the United States is actively applying its doctrine in countries that have become the contact line of the two giants. Kazakhstan, of course, is one of those, primarily because it is a key link in the Chinese project "One Belt, One Road".

But it is important not to fall into the vulgar interpretation of the American export of reaction and fascism. Not a single force in the world, no matter how powerful it may have intelligence and information resources, is capable of initiating a massive popular uprising. It is impossible to create an element, you can only control it, lead a protest, kindle it and, as it was in Belarus, try to organize a putsch in parallel. If the people are satisfied with the power, consider it their own, and are ready to defend, such power cannot be overthrown from within. These are basic political truths that have been repeatedly tested by historical practice.

The originality of the Kazakh socio-political model

In Kazakhstan, after the collapse of the USSR, former members of the CPSU came to power. Nazarbayev was made the head of the republic in 1984 at a young age, he was 44 years old. He was a typical "changeling" for the leader of the decaying CPSU, that is, a liberal in communist guise, just like Gorbachev or Gaidar. After becoming the president of independent Kazakhstan, Nazarbayev built the same resource-oriented capitalism as we had in the 1990s. But unlike Russia, a kind of political compromise arose in Kazakhstan, power and part of the economy were in the hands of Nazarbayev and his people, Western corporations gained access to Kazakh natural resources and cheap labor, and the people got a relatively acceptable standard of living due to natural rent. ... In foreign policy, Kazakhstan has become a neutral country, not drawing closer to either Russia, the West, or Turkey, or China. And this, on the whole, suited everyone.

However, since the 2010s, the Kazakh economic model began to falter, and crisis phenomena began to grow. There were protests by workers in Zhanaozen, which were brutally suppressed. Since 2015, the standard of living in Kazakhstan has been constantly falling. In 2019, Nazarbayev resigned from the presidency, retaining control over the government. In recent years, strikes, protest rallies and popular unrest have taken place in the north of Kazakhstan, which the authorities have been able to stop. However, in early 2022, the country flared up as a result of a two-fold increase in gas station prices. The prevailing political compromise has clearly exhausted itself, the element of popular anger burst out.

The nature of the protests suggests the beginning of a rebellion against the government. The protesters do not have a headquarters, their demands have not received explicit expression, and their activity quickly slipped into senseless pogroms and robbery. It is wrong, in my opinion, to say that economic demands (lower gas prices and higher wages) have turned into political ones (change of power), or rather, to say that the factor of rising prices has become a pretext for a massive protest against the government.

To understand the situation, it is important to understand two aspects: who and why allowed the price jump and what forces are capable of deriving political benefit from the Kazakh rebellion.

The fact is that a sharp rise in the prices of consumer goods is likely to lead to an explosion of discontent. This is a common knowledge that all governments and businessmen use. They always raise prices in steps, like the temperature when boiling crayfish, which is easy to observe in any supermarket, where they either reduce the gramme of the product or raise the price by five rubles. This, of course, does not do honor to the people that such an elementary technique works, but it is a fact.

Therefore, the people who allowed gas prices to double were almost certainly aware of the consequences. Of course, no one could predict such a scale of discontent, but it was obvious that it would be.

Proceeding from this logic, a version emerged almost immediately that Tokayev himself allowed a rise in prices in order to get rid of the elderly Nazarbayev, but the "combination" quickly got out of control. Many, indeed, note that something like a dual power has developed in Kazakhstan. It is difficult to assess the consistency of this version, but it should be admitted that the initiator of the price increase was clearly planning to “rock the situation” in the country.

After the start of the protests in Kazakhstan, prominent oppositionists and representatives of the "fifth column" (NPO) jumped out and began to try to actively organize and direct the protest. Money flowed through the Baltic states, Poland and Ukraine to pro-Western activists in Kazakhstan. Armed groups of provocateurs flashed in the streets. There was even information that the US Embassy had warned its citizens about the protests back in mid-December. However, when checked, it turned out to be fake. Moreover, the US position in relation to the protests was rather restrained, for example, in comparison with Belarus. The coverage of events in Kazakhstan in the Western press does not have an unambiguously positive connotation, as is always the case with “color scenarios”.

In general, there are several typical diplomatic reactions to unrest, from which one can draw conclusions about the position of a particular country. Option 1: such a protest is unacceptable, the authorities must establish order (Russia, China). Option 2: a peaceful protest is permissible, but violence should be avoided, the parties should go to dialogue (USA, EU, Turkey, Belarus). Option 3: this is a peaceful protest, the authorities should not use violence (odious Westernizers and patented liberals).

The assertion that a color revolution is being played out in front of us is, in my opinion, somewhat premature.

The fact is that a significant share of the Kazakh economy is controlled by Western corporations, and the current government is the guarantor of the inviolability of foreign property. Whereas the interests of Russian business in Kazakhstan are small. Even if we assume that the US political leadership decided to overthrow Tokayev in order to organize chaos on the borders of Russia and China, to complicate the implementation of the One Belt, One Road project and to squeeze out Chinese capital, the American oligarchy is definitely not happy with this decision.

In short, the Kazakh regime cannot be called disloyal to the West, pro-Russian or pro-Chinese, but it is not completely controlled by the West either. If there is a final collapse of the political model of Kazakhstan, then nationalist forces will most likely come to power, which will prefer to sell themselves to Turkey.

The entry of Russian troops into Kazakhstan looks hasty

Sending CSTO peacekeepers to help Tokayev will be perceived by the electrified Kazakh public as a Russian occupation. In an effort to maintain stability and order on Russia's borders, this decision looks hasty, it can only aggravate the situation. A riot can always be suppressed by force, but the consequences of this will be delayed. Interference in the internal affairs of Kazakhstan, in which for 30 years they fostered a national enmity towards Russians, can only alienate the Kazakh people from Russia.

Now the situation looks like an uncontrollable riot of the population (like the movement of "yellow vests", but on a Kazakh scale), caused by fair demands to his government, which Tokayev is trying to extinguish with the hands of Russia. The ears of the West are sticking out in terms of trying to control chaos, but the prospect of establishing a pro-Western regime looks ambiguous. This is the case when some are trying to use the bedlam caused by the failure of the government to their advantage, while others are quickly eliminated out of fear of "color revolutions".

It is interesting that China firmly supports Tokayev, but only in words. The Chinese seem to be confident that they will be able to come to an agreement with any government in a neighboring country.
Ctrl Enter
Noticed oshЫbku Highlight text and press. Ctrl + Enter
We are
Who actually won the Cold War and what the future holds for the world
Ten "defeats" of Putin
Reporterin Yandex News
Read Reporterin Google News
50 comments
Information
Dear reader, to leave comments on the publication, you must sign in.