"Maidan" in Kazakhstan - a response to Russia's demands for security guarantees? 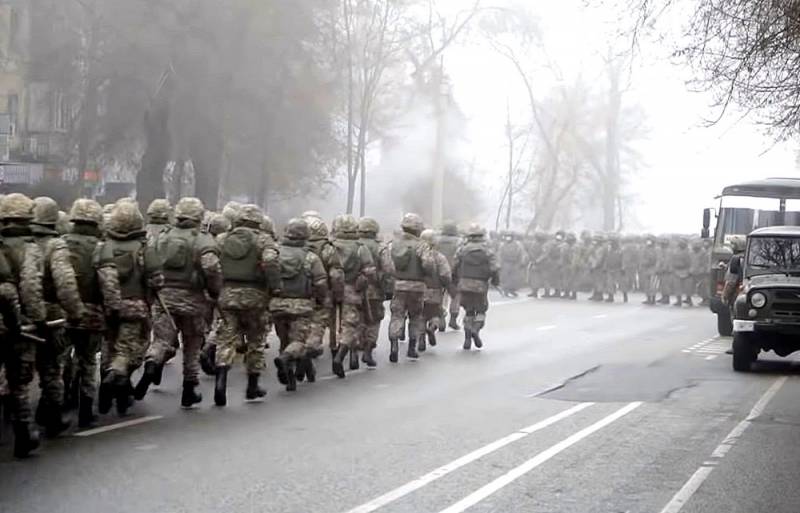 Most analysts (at least for now) tend to view the tragic events in Kazakhstan, which have spoiled the blissful picture of the New Year holidays, exclusively in the context of local local problems. As a maximum - adding to the "palette" some aspects regarding Russia's interference (or non-interference) in what is happening, as well as the possible consequences for our country from the next "color revolution" at its borders. However, some especially stubbornly ... "patriotic" media in Ukraine are already trumpeting that the Kazakh riots were "inspired by the Kremlin" to achieve certain, undoubtedly, sinister "geopolitical goals."


This, of course, is sheer nonsense. Shooting and barricades on the streets of Almaty can now please any of the domestic leaders in exactly the same way as a dead fly in a glass of festive champagne. For all the absurdity of such statements, they very clearly demonstrate the desire to hide the true beneficiaries of the riots in one of Central Asia, more or less friendly to Russia. Those who, of course, most likely, are their organizers. For some reason, no one takes the trouble to compare the “sudden” protests in Kazakhstan with other geopolitical “markers” lying literally on the surface. Namely - with the imminent start of negotiations between Russia and various representatives of the "collective West" on the issue of providing our country with security guarantees. The relationship in this case is strikingly obvious. What does it consist of? Let's try to figure it out.

Kazakh "Maidan" with a Ukrainian "seamy side"

It was no coincidence that I put the word “sudden” in quotation marks, referring to the beginning of the riots in Kazakhstan. Really, the "Maidans" (or their sharp aggravation, as it was in 2014 in the "nezalezhnoy") in the period between New Year and Christmas are beginning to turn into the same vile "tradition" as the attack on our country on June 22 ... The logic is clear - the maximum relaxation and disorganization of all government bodies (first of all - the "power"), the presence of free time and "elevated" mood at the festive tables - all this allows you to "stir up quickly" a mess, from which then it may well To "hatch" a very decent coup d'etat.

Let's leave aside the discussion of prices for liquefied gas and, to put it mildly, the not very thoughtful and successful actions of the country's authorities, who have planted themselves under their chairs not a festive joke, but a natural war charge of deadly force. The main thing here is not the gas, but that no one, God forbid, would think of the current Kazakh bloody bedlam as "spontaneous popular indignation." This is just a very well-prepared action ahead of time with quite clear support and participation of well-defined Western structures and special services. Proof?! Please, get it! Let's start with the fact that the “main oppositionist” of Kazakhstan (who is also on the international wanted list for embezzlement on an especially large scale and the organization of a “contract” murder) Mukhtar Ablyazov is engaged in the “coordination” of pogroms taking place in the country from the territory of ... Ukraine! It is enough to go to his Facebook page to make sure that the contact numbers posted there belong to the operators of the “nezalezhnoy”.

However, this is only the smallest part of the truth. The big thing is that Ablyazov's "revolutionary headquarters" has been functioning in Kiev for at least six months. It was then that the same telephone numbers appeared on the Internet, coupled with calls to "join the activities aimed at overthrowing the Nazarbayev regime." And ... yes, the Ukrainian location of this snake's nest was already indicated quite openly. As they say, what is more? The fact that the “non-profit”, since 2014, has become a springboard for organizing “color revolutions” with anti-Russian overtones throughout the “post-Soviet space” was fully demonstrated by the events in Belarus. Alexander Grigorievich, who did not want to quarrel with Kiev out of purely mercantile interests, was stubborn in this matter, and, well, he was forced to admit everything - and the training of militants for the "white maidan" with their subsequent transfer across the cordon, and supply of weapons, and "organizational and methodological assistance" of the Ukrainian side trying to overthrow him with rabble. And what certainly does not raise doubts is that every single Western structure involved in organizing and arranging such coups, both explicit and secret, operate on Ukrainian territory not only as at home, but much freer and bolder.

Well, these are the natives - why be ashamed of them ?! Numerous facts can be cited as indirect evidence that there is as much “spontaneity” in the Kazakh “protests” as in the Belarusian or Ukrainian ones. What exactly? Yes, at least something too professional (at the level of well-trained sabotage and terrorist groups) actions of "peaceful demonstrators" to neutralize representatives of the local special services and the military. Or - photographs of well-equipped thugs against the background of the blazing building of the state administration of Almaty. Doesn't it convince? Let us then pass from the particular to the general.

A blow to Nazarbayev? No - according to Putin ...

It's no secret that the main irritant among the peace proposals made by Moscow to the "collective West" is the categorical demand to get out of the "post-Soviet space", to which Russia for the first time clearly and clearly declared its rights as its own "zone of vital interests." Or - a security zone, if you like. Of course, we are talking, first of all, about the rejection of the "military development" of these territories, the inadmissibility of admitting such countries to NATO or the deployment by the member states of this bloc of their military contingents and bases on their territories. However, one does not need to be a grand master of geopolitics to understand that such concessions would mean, in fact, a complete “drop out” of the former Soviet republics from the Western sphere of influence. Any puppet mode set there for total economic exploitation of these territories will inevitably fall (sooner or later) without NATO bayonets.

An even more painful factor for our Western "friends" is the impossibility, in the absence of a military component, to use the "post-Soviet" states in their main capacity - staging areas for subversive actions and provocations against Russia. This is precisely what the Kremlin is trying to achieve today. This is precisely what the White House and the headquarters of the North Atlantic Alliance are categorically refusing to do. The flames of riots "accidentally" engulfed Kazakhstan just before the first rounds of negotiations on the relevant issues? Don't be ridiculous ... There are no such coincidences in the Universe. Russia is made clear, unambiguously and in the most rigid way: "We will not go anywhere." Simply put, the West is once again trying to "put in place" our country, showing that it can (and will) do whatever it wants "in its backyard".

Of course, other goals are pursued in this situation. Gentlemen from overseas simply adore "killing with one stone" not even two, but the maximum possible number of "birds with one stone." The bloody chaos in Kazakhstan is also a continuation of the story about the burning desire of the Pentagon to get military bases in Central Asia after its shameful flight from Afghanistan. As we all remember, this impulse did not find the slightest understanding among the local leaders - and not least because of the clearly defined position of Moscow (and, by the way, Beijing too). Should the "pro-Western" forces come to power in Kazakhstan, the United States and its allies will have every chance of revenge. And at the same time, the events there can be viewed as a very unequivocal warning to other Central Asian republics, to which a second proposal will most likely be made soon enough. It will be impossible to refuse ...

Let's not forget about 42% of the world uranium production, which falls on Kazakhstan. In the light of the "arms race" unfolding today, it will not be at all superfluous for the West to acquire such a potential resource (and cut off Russia tightly from it). And at the same time - to confuse logistic and economic plans and "layouts" for China, which is increasingly strengthening its positions in this region, and in full agreement (at least external) with Moscow. Nevertheless, these are all just "side" goals. The main thing is to "sober up" the domestic leadership, making it clear that the West is stronger in situations that cannot be resolved by "Vanguards" or "Zircons". And to do this before the upcoming negotiations, which are extremely difficult for our "sworn friends".

Nobody is going to attack "too much thinking about itself" Russia straightforwardly, "head-on". In the current, far from parity and not at all in favor of the West, conditions of the military-technical gap between the opposing sides, the madmen capable of unleashing the Third World War (especially without a single chance of victory in it) in the camp of our opponents, of course, are not available. But there are enough professionals of secret, "hybrid" wars, dastardly special operations and the device of "color revolutions". It was their forces that now launched the offensive. So far, alas, quite successful. Everything that is happening now in Kazakhstan can result in a whole series of extremely unpleasant consequences for our country - up to the need for direct military intervention in order to protect the Russian people there, which was recently discussed at a completely official level. The rest of the "gifts", both economic and geopolitical, are out of the question.

As for the upcoming negotiations, where the Kazakh events will undoubtedly be used as a bargaining chip by our opponents, then Moscow can and must show firmness. But for the future, she has only two options: either finally and irrevocably admit her own defeat, once and for all refuse to talk about any "security belt" and "sphere of vital interests", or finally begin to take active actions aimed to ensure that no "Maidans" in neighboring countries were possible a priori. Which ones? This is a topic for a completely different conversation.
Ctrl Enter
Noticed oshЫbku Highlight text and press. Ctrl + Enter
Reporterin Yandex News
Reporterin Yandex Zen
26 comments
Information
Dear reader, to leave comments on the publication, you must sign in.