Riots, state of emergency and the resignation of the government: how Kazakhstan survived the past night 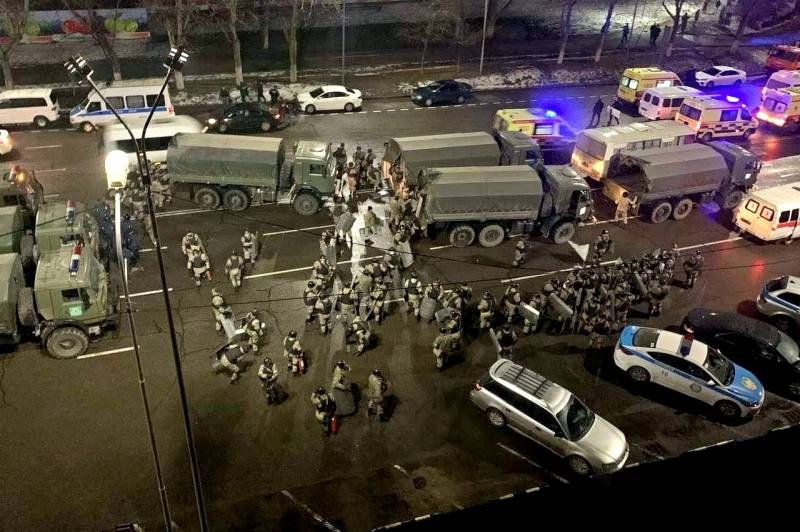 Kazakhstan is gripped by unrest provoked by a sharp rise in the price of motor gas from 60 to 120 tenge (from 10 to 20 rubles) per liter. The rise in fuel prices is due to the fact that from January 1, the cost of gas began to form on electronic platforms, depending on supply and demand. However, in view of the current situation, it was decided to postpone electronic gas trading for a year.


On Sunday, January 2, street protests began in western and southwestern Kazakhstan. On the night of January 3, residents of Aktau gathered in the city square and put forward demands for a reduction in gas prices, and workers of a number of enterprises threatened with mass strikes. Army trucks and police were deployed in Aktau, local media reported. technique.

On Tuesday, January 4, government officials arrived in Aktau and promised to reduce gas prices to 50 tenge. However, this did not stop the unrest, which spread to other regions of the country.


So, on the same day in Almaty, protesters broke through the police cordon on Republic Square, where there were about 5 thousand people. In response, law enforcement officers used flash bangs and rubber bullets.


At the same time, during the riots, the building of the city mayor's office was briefly seized, but later the protesters were ousted from the akimat. The most radical Protestants overturned police buses and smashed benches, making sticks out of them to smash cars.


Taraz, Nur-Sultan and a number of other cities were also covered by protests. The disaffected blocked streets and railroad tracks, erected barricades and threw themselves on armored personnel carriers. As well as economic demands to reduce gas prices were increasingly heard and political - on the resignation of the government of Kazakhstan. The police initiated the arrest of the most active Protestants. According to a number of publications, the authorities are gradually taking control of the situation.


The clashes between the forces of law and order and the protesters did not go without the victims. 54 people were admitted to the central clinical hospital of Almaty, of which 38 were police officers.

Unrest in the cities of Kazakhstan led to a deterioration in the work of mobile communications and the Internet. So, in Almaty, according to the Vlast magazine, there were interruptions in the mobile Internet and the work of the Whats App, Telegram and Signal messengers.

Meanwhile, on the night of Wednesday, January 5, Kazakh President Kassym-Zhomart Tokayev introduced a state of emergency in the Mangistau region and Almaty from January 5 to 19. For the entire period of the emergency, a curfew was introduced from 23 to 7 hours. An order was also issued to restrict freedom of movement and prohibit entry and exit from Almaty.