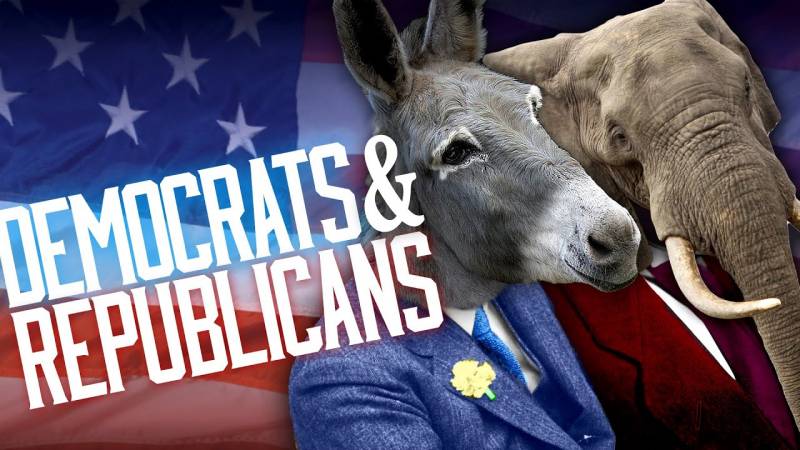 On November 5, 2024, the next presidential election is due to take place in the United States. It is not yet known whether Joe Biden will last until that time or the ambitious Kamala Harris will take the place of the # 1 candidate from the Democratic Party, but it can already be assumed that these elections will become a certain point of no return for the "hegemon". What gives us reason to believe so?


Many theories of varying degrees of adequacy have already been invented about the possible "collapse of the United States" according to the Soviet scenario. However, the objective reality is that the “United States of America” is indeed “pregnant”, if not with a revolution, then with a very serious internal crisis that could lead them to Civil War-2 and even to disintegration. And these are not empty fantasies.

The scandalous US presidential elections in 2020 showed that American society is split into two irreconcilable camps. The reasons for this social phenomenon lie in the area economics: the capitalist system is in a deep crisis, which has only been exacerbated by the coronavirus pandemic, Washington's trade war with its main trading partner, China, and abnormally high prices for hydrocarbons, and hence for electricity and motor fuel. For the first time in decades, a huge number of Americans have decided to abandon the traditional trip to visit relatives on Christmas and Thanksgiving. But the point, of course, is not only in expensive gasoline or diesel fuel.

The problem is systemic. And in the United States, as the “core” of the American-centric world economic system created by them, two concepts were formed and entered into an irreconcilable struggle aimed at breaking the deadlock: “imperial” (isolationist) and “globalist”. The brightest supporter of the first was President Donald Trump, the representatives of the second were President Joe Biden and his black vice-president Kamala Harris. In 2020, the Democratic Party managed to defeat Trump through large-scale election fraud. And here it was again confirmed that the American society is radically split into two irreconcilable parts, supporters of Democrats and Republicans. If you look at the map given political preferences of the population, it turns out that geographically, the United States is noticeably divided into the Midwest, where the "deep people" live, which is for Trump, and two coasts, East and West, mainly voting for the Democratic Party.

Why is it so important? Because the balance of power within the American ruling elite has been disrupted. Previously, the Democratic and Republican parties changed places every 8 years, which could indicate some kind of internal consensus at the top and bottom of society. However, the unexpected rise to power in 2016 of Donald Trump, which began to destroy all the structures of the "globalists", frightened his opponents. As a result of an apparent conspiracy of the elites in 2020, a de facto coup d'etat took place in the United States, which the Americans hypocritically did not call such. In theory, Trump or another Republican candidate could try to return to power in 2024, but he simply won't be allowed to do so.

It's all about the peculiarities of the American electoral system, where presidential elections are indirect. To win, you need to get the appropriate number of electoral votes in certain states. Because of this, it also happens that the candidate becomes the president for whom fewer voters voted than for his rival. The United States is now in a fierce political battle for the year 2024. Its essence lies in the fact that the Democrats who won in 2020 want to exclude the very possibility of a Republican revenge. To this end, they have already begun to reshape the electoral system for themselves.

Thus, the New York City Council decided that even stateless persons with only a green card or work permit will be able to participate in the next municipal elections. This means that an additional 800 thousand people will be able to vote. Why this is done is not difficult to guess. The innovations will include immigrants, who are an important component of the electoral base of the US Democratic Party. The law may come into force in January 2022. Fifteen major municipalities have already followed the same path, including San Francisco and Somerset. Illinois, Maine and Massachusetts may soon join them. As you can see, the initiative is mainly shown by the "democratic" cities on both coasts.

Yes, municipal elections are not state or presidential elections yet. However, this is an important precedent that can be used in the future when resolving in the Supreme Court the issue of the legality of participation of stateless persons in federal elections. By the way, for example, in New Zealand, a foreigner who has lived in the country for 1 year and 1 month has the right to participate in national elections. So there is nothing improbable in such a prospect for the United States.

And what about the Republicans? They perfectly see where things are going, so they fiercely resist innovations. Arizona, Alabama, North Dakota and even Florida have passed laws prohibiting stateless persons from participating in American elections. However, this whole struggle will be lost if the Democratic Party can push through the bill granting citizenship to 11 million illegal immigrants. If, by legalizing them, they are distributed in a certain way among the "republican" states, then revenge of Trump or his associates will become simply impossible.

What can this eventually lead to?

One country, one party, one Fuhrer, sorry, president. Will Midwesterners want to keep up with the "globalists"? Is not a fact. If they are deprived of the opportunity to legally defend their rights and freedoms through the electoral mechanism, this will be the strongest prerequisite for an internal conflict that could lead to a second Civil War and, as a result, perhaps even to the disintegration of the United States into two coasts and a "hinterland."
Reporterin Yandex News
Reporterin Yandex Zen
19 comments
Information
Dear reader, to leave comments on the publication, you must sign in.