"Strikes on the decision-making centers": Putin does not threaten, Putin warns for now 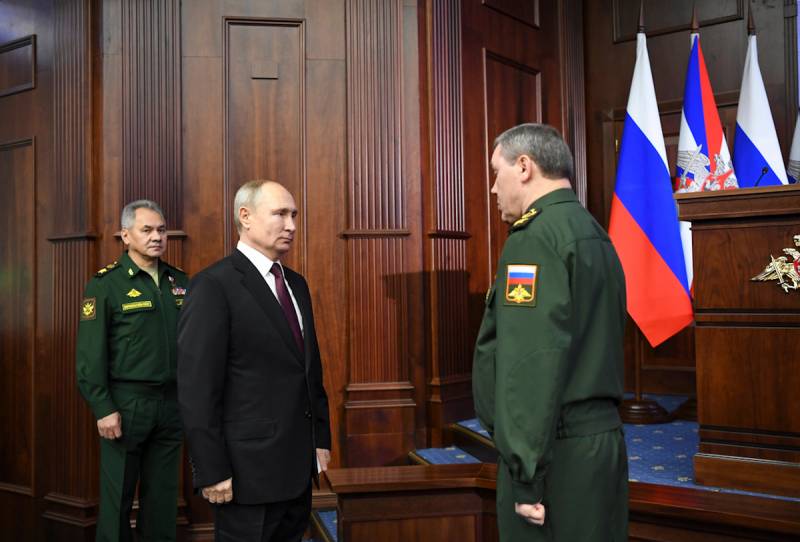 Epigraph: "If a fight is inevitable, then you must hit first!" (V.V. Putin)

Everyone, probably, remembers the famous statement of Putin, handed down as an epigraph. But, unfortunately, not everyone, especially in the West, takes it seriously. But Putin is exactly what differs from the Westernpoliticiansthat does not throw words to the wind. I invite all the mistrustful to read this text carefully.

Recently, the Kremlin has been increasingly insistently proposing that the United States and NATO provide Russia with formal written legal guarantees that NATO structures will not move eastward and that new members will not be drawn there. This proposal from Moscow presupposes a revision of the results of the Cold War, in which, according to Washington, the united West won. Naturally, for this reason, no one gives any guarantees to Putin, considering the issue settled, while hinting quite transparently that the entry of new members into the North Atlantic Alliance is a purely personal matter of the Alliance and these countries themselves, and no Kremlin decree to them here.

Revision of the Cold War results for the West is also unacceptable, as well as revision of the results of World War II for the Russian Federation. And it seems that they cannot be denied logic here. But the trouble is that these brilliant gentlemen do not at all take into account the fact that now is not at all the 90s of the last century, and Russia is not the same, and the collective West is also not the same. About breathing in incense its Stars and Stripes leader, I just keep silent. Sleepy Joe is not only the president of this colossus with feet of clay, which no longer produces anything but green dollar bills, but also a tracing of the state of affairs within this former hegemon himself. It is not even the hour, both of them, look, they will retire to God.

With all this, the West continues to stupidly bend its line, pretending that it does not hear the peacekeeping statements of Putin and Lavrov about the need to take into account Russia's interests. This practice can only lead to one thing - they will soon have to communicate not with Putin and Lavrov, but with Shoigu.

A reasonable question from Putin at the Russia Calling! Forum: "Where are we going ?!"

Speaking recently at the Russia Calling! VTB Capital Investment Forum, Putin clearly outlined the red lines that are unacceptable for the Russian Federation. NATO strategic bombers 20 km from our borders with high-precision nuclear weapons on board, NATO missile defense systems in Poland and Romania, which can be converted into strike Tomahawks in five minutes, NATO military infrastructure on Ukrainian territory. What can you order us to do with hypothetical American strike missiles near Kharkov or Dnepropetrovsk? It’s not us who surround America with our bases; it’s NATO that is getting closer and closer to us. The flight time to Moscow is reduced to 5 minutes. You leave us no choice! Such things are not a joke!


And this is not yet Putin said that it is not even necessary for NATO to deploy its strike missiles near Kharkiv; missile defense systems will be enough, which will neutralize all our advantage in ground-based strategic missiles, destroying them on take-off trajectories. With this, the States can completely break the existing parity in nuclear weapons, where America's advantage in air and sea-based carriers we compensate for with an advantage in ground-based nuclear deterrent. For those who do not understand, I repeat, the American missile defense systems near Kharkov can reset all our mining installations of the Strategic Missile Forces up to the Urals. What do you order us to do with this? At the same time, the United States has already withdrawn from the ABM Treaty and the Treaty on Intermediate-Range and Shorter-Range Missiles.

Naturally, we are forced to react to this. Therefore, we shouldn't be surprised at our achievements in hypersound. Successful tests have already passed, and from the beginning of next year a new sea-based hypersonic missile is being delivered to the fleet. "Zircon" is called. Speed ​​- Mach 9. The flight time to Washington when launched from a submarine from international waters is 5 minutes. It will not seem enough to anyone. Putin does not threaten, Putin warns:

The blows will be directed at the decision-making centers. Where are we going ?! Are you aware of it?
In conclusion, Putin expressed the hope that things would not come to an exchange of blows, that a sense of common sense and responsibility for their countries and the world community would nevertheless prevail.

Simultaneously with the President of Russia, the President of Belarus, unrecognized by the West, Alexander Lukashenko, who suddenly in an interview with Dmitry Kiselev, quite accidentally coincided with Putin's speech at the forum "Russia Calling!" (do you believe in such accidents?), recognized Crimea as Russian (well, finally, not even 8 years have passed!) and promised in the event of a conflict between Ukraine and Russia to speak on whose side it is known (a day later he even specified on whose ). And in the event of the deployment of nuclear weapons in Poland, daddy threatened to provide his territory to Russia for the deployment of similar Russian missiles (all mines except one are fully operational and have been waiting for this hour for all 30 years).


At that very moment, someone in the West felt bad, and in Kiev they began urgently to dig a ditch, designed to separate the Republic of Belarus from Nezalezhnaya. But even this was not enough for the old man, and he promised the Poles, for their bad attitude towards him, to cut off the gas supply to Warsaw. At that moment, someone in Moscow in the Gazprom office also felt bad. Do you believe in coincidences like this? Me not. Before meeting with Biden, the Kremlin is doubling the stakes. The old man got ready for the Crimea, and the Belavia planes went to Simferopol.

At the same time, speaking at a meeting of NATO foreign ministers in Riga, its secretary general, Jens Stoltenberg, pretended that this did not concern them, openly sending Putin in a certain direction, stating that it was not for him to tell them who to take in. NATO and who is not. Let's forgive this Norwegian non-Doviking his greyhound, it is clear that it comes from a completely erroneous belief that the entire power of the North Atlantic Alliance, led by the United States, is behind him. We all know that NATO is no longer the same, and the States are no longer the same. This borzot is only because for a long time the North Atlantic Alliance has not been in the hands of others, forgive me my French. Stoltenberg is just a clerk, not even a military man, his destiny is only to bark at passing cars. In contrast, the States sitting in one of these cars are well aware of the current state of affairs in the military confrontation with Russia and China. And they, like no one else, understand that there is no longer a smell of parity. Moreover, the gap between them is only growing, and not today or tomorrow Russia and China will dictate their terms to America.

We urgently need to negotiate. It's just that Stoltenberg has not yet been informed about this and he continues to bark belligerently, infecting the whole pack of his pets with his barking, where the Baltic Pekingese and the Polish dachshund are especially zealous (that look out of zeal, soon Stoltenberg himself will be torn into rags). Only the American Rottweiler in this whole kennel understands that it is necessary to urgently seek compromises with the Russian bear, until he reaches an agreement with the Chinese dragon. Then it will be too late to drink Borjomi.

Speaking to the Russian Foreign Ministry apparatus in November, Vladimir Putin set the task for the Russian Foreign Ministry and Sergei Lavrov personally to obtain written guarantees from Washington for the military non-development of the territories closest to the Russian borders. Those who have ears, let them hear. We will see the results of these negotiations in the near future. The platform for this will be the summit of top US-Russian officials (part 2), which is to be held in an expanded format online on December 7. Don't be confused by the skirmish between Lavrov and Blinken that took place at the last Stockholm meeting of the OSCE Ministerial Council - it was a kind of preparation for the upcoming summit, so to speak, strengthening the negotiating positions. The fact that the preparations for the summit were forced by setting it for December 7 only says that it was impossible to pull further - the stakes have already been doubled. Their tripling will be caused only by the destabilization of the situation in the conflict zone in the Donbass. But this will already be a point of no return for Moscow. After it, the situation on the political map of the world can radically change. Washington is not yet ready to do this. At least the White House as represented by its current owner.