Ships in exchange for grain: Can Russia return the Mistral from Egypt? 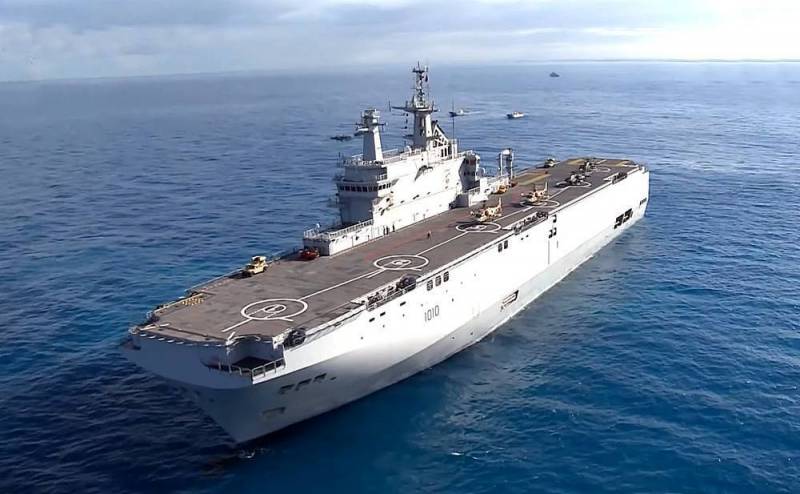 After the events of 2014 in Ukraine, France considered it impossible for itself to fulfill the contract for the supply of two ordered Mistral-class UDCs to Russia. Ultimately, both helicopter carriers left for Egypt, and the Russian Defense Ministry had to redesign its own counterparts of the French ships under Project 23900. This puts an end to a long-standing and rather strange discussion about whether our country needs universal amphibious assault ships of the 1st rank at all?


If you recall the domestic press of those years, then as soon as they did not throw mud at the Mistral, calling the deal corrupt, and the ships - unnecessary (well, of course). How many dubious witticisms and "expert opinions" have been expressed, that we supposedly have nowhere to land the landings, on the Kuril Islands or what?

True, just a year later, in 2015, Russia entered the Syrian campaign on the side of official Damascus, and then it suddenly became clear that the Russian Navy did not have enough ships to supply its military group in the SAR, and it had to rent and reserve everything that was still able to float. It turned out that two universal amphibious assault ships, designed to deliver 900 Marines each, 16 helicopters, attack or anti-submarine, up to 60 armored personnel carriers, 70 trucks and up to 13 tanks, would be very useful. More importantly, the Mistrals are not only large transport ships, they are also specialized command ships created to control a naval formation or heterogeneous forces. In particular, the French-built UDC would undoubtedly be useful for coordinating the actions of the Russian military contingent in the SAR, the Russian Aerospace Forces and the Mediterranean squadron, where the Mistrals acted as its multifunctional “core”.

These are these "unnecessary" ships, almost as "unnecessary" as aircraft carriers with their carrier-based aircraft and anti-submarine helicopters. By the way, the Mistrals would definitely not hurt as anti-submarine helicopter carriers in the Northern Fleet and in the Pacific. Especially at KTOF, where it is urgently necessary to strengthen the capabilities to combat Japanese and American submarines, and the likelihood of amphibious assault landing on the islands is also possible.

Alas, both UDCs went to Egypt, and Russia had to develop and build their counterparts on its own. According to the 23900 project, domestic helicopter carriers may even be slightly better than the Mistrals. The question is timing. The ships were laid down only last year, and their delivery is scheduled for 2028 and 2029. Mitrofan Moskalenko will become the new flagship of the Black Sea Fleet, and Ivan Rogov will go to the Pacific Ocean. That is, a lot of time will pass, but they were needed back in 2015! At the same time, the Northern Fleet will be left without the helicopter carrier it needs. What to do?

You can, of course, do nothing at all, let everything go as it goes. But we could try to correct the injustice by taking back our Mistrals. Verne, not to take, but to redeem from Egypt.

Why does Cairo need 2 UDC at all? The Egyptian Navy is one of the largest in the region, but is represented mainly by age frigates and corvettes, as well as missile boats. In fact, this is a "mosquito fleet", divided into two waters, the Mediterranean and the Red Seas. For Mistrals there are simply no real tasks there. The main opponents of Egypt are next to him on land: these are various terrorist groups, the "walk-field" in neighboring Libya, nearby is a longtime regional adversary, Israel. In addition to the "prestige", with the purchase of the French UDC, Cairo also received a considerable financial burden on the maintenance of such large landing ships.

Perhaps it would be wise to put before Egypt the question of buying out both Mistrals for the needs of the Russian Navy, offering in return what Cairo really needs. And what could it be?

At firstweapons, of course. Egypt is a major buyer of Russian weapons. He is interested in fighters, helicopters, air defense systems, artillery, anti-tank and small arms.

SecondlyLet's not forget that Egypt is the largest buyer of Russian foodstuffs. Cairo is heavily dependent on the supply of domestically produced wheat. Recall that the embargo imposed by Moscow on grain exports after the terrible summer of 2010 led to an increase in food prices and became one of the prerequisites for the so-called "Arab Spring". Experts have been talking about the impending global food crisis for a long time. Abnormal energy prices have already led to a sharp rise in the cost of fertilizers, which, in turn, will inevitably lead to a further increase in food prices. If you are not yet lucky with the winter and spring of 2022, then by the fall in the Middle East and North Africa, bad events may begin again.

Of course, there is no talk of exchanging Mistrals for grain and other foodstuffs, it would be too much, but Russia could buy back the helicopter carriers at a substantial discount, providing Egypt with a discount on wheat or weapons, or both. Having received helicopter carriers, the RF Ministry of Defense would have the opportunity to strengthen its fleet now, without waiting for 2028 and 2029. Why not?
Reporterin Yandex News
Reporterin Yandex Zen
60 comments
Information
Dear reader, to leave comments on the publication, you must sign in.