China mobilizes on the brink of a new Cold War 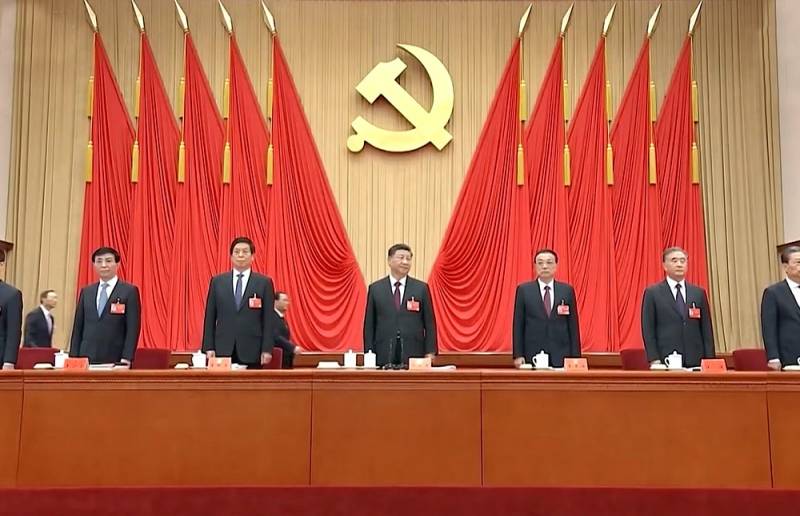 In the 1990s, many in the West thought, not without reason, that the days of the Chinese Communist Party were numbered, that sooner or later the Soviet scenario of collapse would be realized in the PRC. The leader of China, Jian Zemin, launched large-scale market reforms, allowed partial privatization and share ownership, and gradually removed the party organs from economic issues. The liberalism of the CCP has made significant progress in comparison with the reforms of Deng Xiaoping, the second "thaw" since the 1980s began in the country, coupled with active Westernization. Society has undergone moral and spiritual decomposition by market relations, and democracy, as you know, the more successfully it is introduced in a socialist country, the stronger the moral decay and spiritual degradation.

After the start of the policy reforms and opening up, problems such as drug addiction, prostitution, gambling, which disappeared in China many years ago, have re-emerged. You open a window, for example, and flies will immediately fly into the room; it is important not to let them multiply, it is necessary to destroy them.
True, the CCP did not succeed in destroying flies, especially corrupt ones, and their reproduction promised to be fatal.

However, in 2002, the "right" Jiang was replaced by the "left" Hu Jintao, who gradually reoriented economic development from market indicators for the construction of infrastructure (railways and highways, ports, airports, metro and so on) and stimulating domestic demand. Chairman Hu restored the hegemony of power among the party committees.

After Hu, the helm of the party and government passed to Xi Jinping, who continued the work of his predecessor with a much firmer hand. Xi carried out a large-scale purge of the party, announced that "the party decides everything," and China entered a "new era", becoming a strong world leader.

Xi Jinping's brilliant victory over poverty and the suppression of the covid pandemic raised his authority to the height of the nation's helmsman. And the Cold War declared by the Americans on China only rallied society around the CCP. Now in China everything is according to the classics: we say "Xi" - we mean a party, we say "a party" - we mean Xi. The West does not accept any more bets on the collapse of the CCP dictatorship.

Under these conditions, Xi Jinping decided on the next issue of the Chinese "Short Course" in order to cement his role in historiography, the successes of the party and China.

This is not just an internal-party article for reflection, but a methodological basis and a document on history that must be followed by the entire party and the state, on the basis of which manuals, textbooks, articles will be written, self-education and teaching will be organized, films and serials will be shot. All positive figures noted in the resolution will be heroized, negative ones - cursed. All marked places will become objects of tourism, and battles will be sung in cinematography and on theatrical stages. Everything is like under Comrade Stalin.

Rejection of Marxism or Return to Maoism?

The first question that usually interests all foreign observers of China is how far has the CCP retreated from Marxism and communism? Is China's ruling party going left or right?

The Chinese Communist Party is structured in such a way that the twists and turns of ideology in questions of history are a reflection of the dominant political line of the leadership.

Xi Jinping's resolution of the events before the "Culture of the Revolution" sets out in full accordance with classical Maoism, with the way it was set out by Mao Zedong himself. The period of the "Cultural Revolution" is given in the spirit of Deng Xiaoping, but in much softer formulations:

Unfortunately, the correct course, formed at the VIII Party Congress, was not fully completed, mistakes were made such as the “Great Leap Forward” movement, the movement for the creation of people's communes, as well as serious excesses in the struggle against the right-wing elements. In the face of the harsh and difficult external situation at that time, the party devoted considerable attention to strengthening the socialist power and made enormous efforts for this. Nevertheless, Comrade Mao Zedong's mistakes in his concept of the class struggle in socialist society, both in theory and in practice, became more and more serious, and the CPC Central Committee failed to correct them in time. Due to a completely erroneous assessment of the existing class forces in the country and the political situation in the party and state, Comrade Mao Zedong launched a "cultural revolution" and led it. The counter-revolutionary groups Lin Biao and Jiang Qing, taking advantage of the mistakes of comrade Mao Zedong, committed many crimes against the state and people, and entailed ten years of turmoil that brought the party, state and people the most serious setbacks and losses since the formation of the PRC. It was a tragic lesson. In October 1976, the Politburo of the Central Committee of the party, fulfilling the will of the party and the people, decisively defeated the "four" and put an end to the "cultural revolution" - this great disaster.

Note that Xi Jinping says that the "Cultural Revolution" made "serious excesses in the fight against the right-wing elements," while Deng Xiaoping's decision said otherwise:

The assertion that the "cultural revolution" is a struggle against the revisionist line or the capitalist path is completely groundless, moreover, it blurs the line between truth and falsehood on a number of important questions of theory and political attitudes. Much of what was criticized as revisionist or capitalist in the course of the "cultural revolution" is in fact the basic tenets of Marxism and the principles of socialism, and much of this was at one time suggested or supported by Comrade Mao Zedong himself.
That is, Chairman Xi seriously corrected Chairman Deng on this issue: it turns out that the "right-wing elements" were and threatened the fate of the country, but with regard to them, they went too far with repression. This is an important point, which indicates that the current CCP has gone to the left a lot.

The description of the adoption of the course of "reforms and opening up" and the development of the theory of "socialism with Chinese characteristics" in the document fully correspond to the canonical version of Deng Xiaoping himself.

Another meaningful element that makes it possible to understand the political tendencies within the CCP is the attitude to the period of Jiang Zemin, who in fact implemented the Keynesian economic model of state capitalism in China and even admitted business representatives to the party. Here, Jiang was credited only with the fact that his ideas "withstood severe tests in the face of an extremely difficult internal and international situation, serious failures of world socialism and defended socialism with Chinese characteristics." He has the most humble contribution of all. Especially as Jiang's successor, Hu Jintao, pursued "comprehensive, coordinated, sustainable development, paid special attention to ensuring and improving the lives of the people, promoted social equality and justice, and helped strengthen the party's progressive character" and the like.

Of course, the new "solution" is not a pivotal or revolutionary one, but more leftist tendencies are evident in it.

The second question that usually interests all foreign observers of China is what will happen next? What future will the CCP lead China into?

First, Xi Jinping has been declared a theorist and, in fact, the real leader of the CCP:

Comrade Xi Jinping is the main founder of Xi Jinping's ideas about socialism with the Chinese characteristics of a new era. Xi Jinping's ideas about socialism with Chinese characteristics of the new era are the Marxism of modern China, Marxism of the XNUMXst century, as well as the quintessence of Chinese culture and Chinese spirit in the modern era, and herald a new leap in the Sinification of Marxism. The Chinese Communist Party determined the status of Comrade Xi Jinping as the leading nucleus of the CPC Central Committee and the entire party, determined the leading position of Xi Jinping's ideas on socialism with Chinese characteristics of a new era, which reflects the common aspirations of the party, the army and the entire multinational people of the country, is of decisive importance for the development of the cause parties and states in a new era, to advance the historical process of the great revival of the Chinese nation.
It should be noted that in the Chinese mentality, big leaders think in extremely general categories. As a rule, they do not care much about popularity, ratings and what the West thinks about them. The main thing for them is to get into Chinese history with an impeccable reputation and high-profile achievements. Xi Jinping is successfully coping with economic difficulties, pandemic and poverty, the economy is actively developing under him, and China's authority on the world stage is strengthening. Therefore, he hastened to consolidate his role in history and theoretically substantiate the continuity of his policy from the beginning of the founding of the PRC.

Secondly, the current policy of the CCP is to imbue the ideology of the party as deeply as possible in the minds of the Chinese, to make every Chinese a bearer of party views. This is done primarily through the propaganda of the history of "New China". The CCP returns to the principles of total ideologization of society. The era of unprincipled development of the market economy is over.

Third, the CPC incites the party and non-party masses to fight the opponents of its course, both within the country and abroad.

All party members must always remember that "sorrow and suffering encourage uplift and development, and carelessness and the pursuit of pleasures lead to decline and death," the decision says. , continue to promote party building in the new era as a great new program. It is necessary to adhere to the principles of all-round intimidation of internal party governance, resolutely and steadily promote work to improve the party style, create an incorruptible apparatus and fight corruption, boldly face the trials that have fallen to the party's lot related to long-term stay in power, with the implementation of reforms and expansion of openness, with the development of the market economy and the challenges of the external environment, resolutely overcome the dangers of spiritual laziness, lack of skills, separation from the masses, corruption and other negative phenomena. It is necessary to preserve the majestic spirit of heroism - “the more difficult and dangerous, the more boldly it is to rush forward”, boldly fight, improve the skills and abilities of waging, as they say, “having met the mountain, pave the way; having met the river, build a bridge ”, not to retreat before any difficulties, not to lose heart at any setbacks, to strive to ensure that the ship of the cause of socialism with Chinese characteristics continues to cut the waves and boldly move forward, stopping at nothing.
Therefore, the main conclusion about the future of the CCP leading China is that Xi Jinping is pursuing a policy of mobilizing the country against the threats of a new Cold War. Maximum centralization and maximum rallying around the CPC Central Committee and the leader personally. China is preparing for open and "cold" conflicts with the West. This is the main political message of the document.
Reporterin Yandex News
Reporterin Yandex Zen
4 comments
Information
Dear reader, to leave comments on the publication, you must sign in.