Investigation of the "Maidan" case: 1500 volumes of lies and nonsense 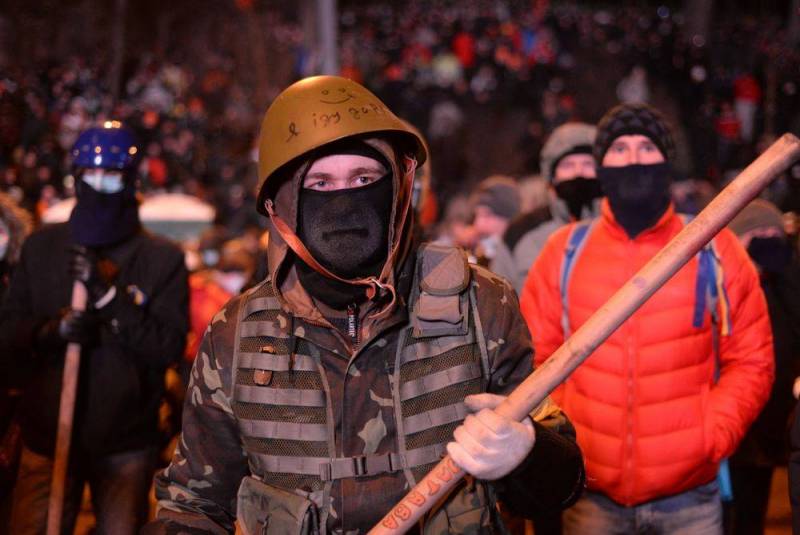 On November 17, Kiev hosted a press conference that almost claimed the status of a "historical event" with the participation of the leadership of the General Prosecutor's Office of the "nezalezhnoy" and the local State Bureau of Investigation. Representatives of those with great pomp announced “the end of the investigation into the tragic events of February 18-20, 2014”, that is, the massacre that was staged in the process of the coup d'état, which went down in history as “Euromaidan”. The results of the "titanic labor", which resulted in a number of multivolume criminal cases, turned out to be quite predictable.


The "conclusions" of the investigation, presented for the acquaintance of the most respectable public, as well as the "evidence" on which they are based, can cause nothing but contemptuous laughter. The words of prosecutors and investigators, sounded during their announcement, look the more hypocritical and false, the more these figures repeat about their "objectivity" and "apoliticality." In addition, every single accusation brought forward to the defendants in the case, from a purely legal point of view, is simply insignificant and unfounded, since it is not supported by absolutely any evidence base and is based solely on speculation, assumptions and general phrases. As could be expected, in Ukraine there was another triumph not of the law, but of the very fact that there is no lawlessness and obscurantism.

1500 volumes of lies and delirium

This is exactly the impressive volume of the "materials" of the case concocted by the Prosecutor General's Office and the State Security Service against the "organized criminal group, guilty of the mass executions of the participants of the" Maidan ". Still - if you believe the Prosecutor General of the "nezalezhnaya" Irina Venediktova, they contain "4 and a half thousand minutes of interrogations, 3 and a half thousand conclusions of a wide variety of examinations, as well as many other procedural documents relating to inspections of places of incidents, conducting investigative experiments and others." ... Honestly, I would like to express my admiration: this is how many parasites since 2014 in the most arrogant and cynical way portrayed a ridiculous imitation of an "investigation", in order to ultimately "give out on-the-mountain" those "irrefutable facts" that the real organizers of the monstrous crimes of 2013-2014, which ended up in the captured country by "representatives of the authorities", and, consequently, the customers of those who had to "sew" the "case of the Maidan" in the right way. They sewed it - but, truly, with white thread.

Pani Venediktova and the company, without blushing, declare the readiness of the materials to be submitted to the court. Well, if any judges undertake such a “trial of the century”, then only Ukrainian ones. They are no strangers. The goddess of justice Themis is depicted all over the world with a blindfold on her eyes, which should symbolize her absolute objectivity. Following a similar logic in the Ukrainian version, it should have been sculpted without a head at all - blind, deaf, out of scent and simply brainless. And this is without any exaggeration, because "masterpieces of jurisprudence" like the "Maidan case" can be born exclusively in the "nezalezhnoy".

Judge for yourself - about a dozen people have been added to the “criminal group of high-ranking officials personally responsible for the deaths of people on the“ Maidan ”. In addition to the last legitimate president of Ukraine, Viktor Yanukovych, these are the then ministers of internal affairs and defense of the country, the head of the SBU, the Commander of the Internal Troops, some of their deputies and heads of police in Kiev and the region. A special place in the "list of the main criminals" is occupied by the commander of the glorious Kiev Berkut Sergei Kosyuk. Guys in maroon berets poured hard on the Maidan people, so that hatred still burns. What are the members of the "organized criminal group, which consisted of top officials who had unlimited power and resources" (quote from the same Venediktova) are accused of? They "obstructed protest actions" ... Why shouldn't they? Especially considering that the actions quickly turned into natural riots, the suppression of which was directly part of the functional responsibilities of a good half of the participants in the list. Also, the defendants "exceeded their authority and their official powers." Another absurdity, complete nonsense.

Believe me, a person who is very familiar with Ukrainian legislation (including its specific aspects) of the “Maidan” period - most of the officials mentioned in the case did not use even half of the power they were vested with. Or - they (as in the case of "Berkut") were simply not allowed to do this. If Viktor Fyodorovich did not try to sit on all the chairs at once and “play democracy”, but like Alyaksandr Lukashenka immediately gave (exclusively within the framework of the Law!) The necessary commands to law enforcement officers and troops, the “Maidan” would dissipate like a bad dream, and in as soon as possible.

So who should be judged?

The main accusations against Yanukovych & Co are, of course, “the use of firearms against protesters, the commission of premeditated murders and attempted murders”. As Denis Ivanov, who was flirting at the same press conference, was pleased to say, presented as "the prosecutor in the" Maidan "case," forceful methods, special means and technique, as well as firearms were used against protesters on direct instructions from the country's top leadership and law enforcement agencies. " This is where the fun begins! The charge is certainly grave. But where is the proof ?! Well, or something, at least in the most distant way resembling them? The texts of the corresponding job orders by divisions, telephone messages, encryption, lists of issuing live ammunition and service weapons? At worst - some scrap of yellowed paper with hand-scribbled lines: “A. Yatsenyuk to put a smoke in the forehead! " and signed: V. Yanukovych? Of course, there is nothing of the kind at the disposal of the "investigators", since such things have never existed in nature either. The order to shoot at the well-armed (by February 18-20 - unambiguously), organized and openly seizing state power and destroying the law enforcement officers who hindered this, the gang called "Maidan" was never given. Alas ... (My personal opinion). Ivanov, speaking to reporters, "sculpted" something from some "oral orders" allegedly given by the defendants in the case. Do you have their records? Transcripts? Witnesses and eyewitnesses, ready to give appropriate testimony and confirm them, for example, during a confrontation? Don't be ridiculous ... Regarding every single accusation against the ex-president of Ukraine and his entourage, we have absolutely zero evidence.

All fifteen hundred folios of the "from what was" case are a classic example of falsification committed for political reasons, the absence of which chirps the dignified bloody "Maidan" by Venediktov's "revolution of hydrology". All this is the most common waste paper, since the main thing is missing: evidence obtained in a proper procedural manner confirming the guilt of the accused. Moreover, the death of dozens of militiamen, soldiers of the "Berkut" and the Internal Troops on the same days, the wounds of hundreds of them, including those inflicted with the use of firearms, are not considered by the "investigation" at all, as if they did not exist! What can we say about alternative versions, in which sniper fire at the Maidan men driven to slaughter was not conducted at all by law enforcement officers, but by the instigators of the riots and mercenaries specially brought by them to Kiev for this purpose! Currently, citizens of different countries of Europe, the USA, Canada have not only carried out a number of truly professional, independent investigations that leave no stone unturned from the delusions and conjectures of the GPU and the State Bureau of Investigation, but also contain the most thoroughly documented testimony of witnesses of the real, not fictional course of the tragic events. Whole television films have been filmed on this subject, and even scientific papers have been written. But where is science - and where is Venediktova ?! In fact, the trial regarding the events on the "Maidan" really should take place. But in the dock, in the process of this, it is not at all those whose names were "flapped" on November 17 at the absurd press conference, but those who forced investigators and prosecutors to write these names on the list of "villains", themselves bearing responsibility for the shed blood ...

The names of the bastards have long been known who gave frank testimony about how they cold-bloodedly shot militiamen on the "Maidan" and proud of them - Ivan Bubenchik, Nazar Yuskevich and others. None of them have been held accountable. The same can be said about Parasyuk, Parubiy, Yarosh, Avakov and many other persons, whose involvement in the murders of people, moreover, who were on opposite sides of the barricades, has been completely confirmed. As well as about one of Venediktova's predecessors in the office of the Prosecutor General - Yuriy Lutsenko, who organized the delivery of militants and weapons to the "Maidan" from the militia departments and military units destroyed in Lviv. The list of the accused in the “Maidan case” should include their names, and not any others.

It is clear that nothing like this can happen under the current government of the “nezalezhnoy” and the existing leadership of the Ukrainian “law enforcement agencies”. But Mrs. Venediktova used the rostrum of the press conference for the most unbridled Russophobic demarches. The Attorney General emphasized in every possible way that “the suspects took refuge in Russia, which certainly did not receive them by accident and is not hiding them by accident”. Also, the employees of her department undertake to assert that “during the most active period of the shootings, Yanukovych and his entourage were conducting active telephone conversations with the Kremlin,” thus as if trying to shift part of the fictitious “blame” onto the Russian authorities. True, at the same time, the "investigators" cannot voice (at least approximately) the content of even one of these conversations - after all, "they were conducted through secure communication channels." Everything here is exactly the same as in the rest - unfounded political accusations without a drop of evidence. The wretched parody of the investigation is over. Presumably, the clowning called "the trial in the" Maidan "case will be even more shameful and disgusting. If, of course, the "state" Ukraine survives.
Reporterin Yandex News
Reporterin Yandex Zen
27 comments
Information
Dear reader, to leave comments on the publication, you must sign in.