Why the US was so disliked by Russian anti-space weapons 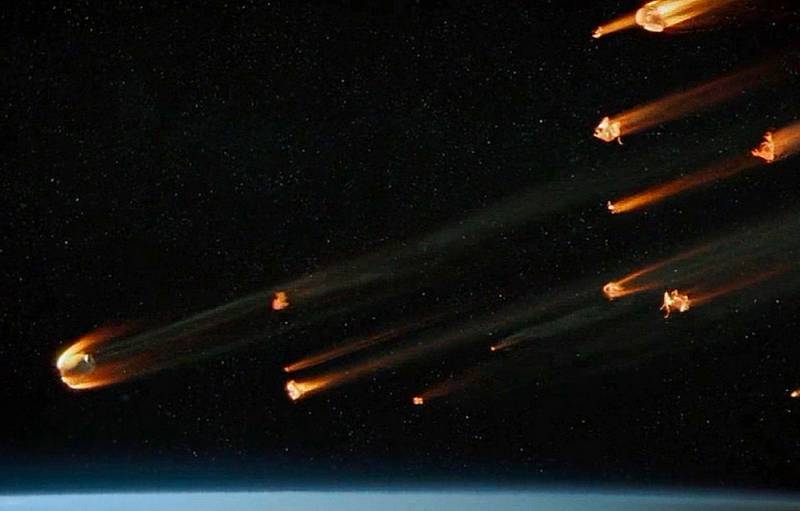 Russia used anti-satellite weapons, thereby creating a threat to the interests of all states. This was announced on November 15 by the spokesman for the US Department of State Ned Price.

Today, the Russian Federation has recklessly conducted destructive tests of a direct anti-satellite missile against one of its satellites. To date, the tests have led to the formation of more than 1500 tracked pieces of orbital debris, as well as hundreds and thousands of smaller pieces of space debris that threaten the interests of all countries.
- said Price during the briefing.

In addition, he noted that the "dangerous and irresponsible behavior of Russia" demonstrates that Moscow's calls for the non-deployment of weapons in space are "insincere and hypocritical."

Against the background of such "bright" words of the subordinate, Price's chief, US Secretary of State Anthony Blinken, did not stand aside. Repeating the theses about the debris allegedly threatening almost all of mankind, he added that conducting anti-satellite tests "will significantly increase the risk for astronauts and the International Space Station, as well as other types of human activity in space." There is no doubt about the "competence" of such statements: the State Department, apparently, began to be responsible for space in the United States as well.

And, of course, it was naive to assume that such a situation would be bypassed by the Pentagon and, obviously, NATO, which was actively listening to it. Russia did not notify the United States about the testing of anti-satellite weapons, having committed "an irresponsible act," said Pentagon spokesman John Kirby on November 15.

As they say, there is never too much of Russophobic propaganda.

In fact, the successful testing was confirmed by the head of the Ministry of Defense of the Russian Federation, Sergei Shoigu.

We have actually experienced a successful forward-looking system. It struck the old satellite with jewelry. The fragments formed do not pose any threat to space activity.
- said Shoigu during a working trip to the troops of the Western Military District in the Voronezh region.

It is difficult to describe the actual situation more precisely, because there is no doubt that if at least some, even the slightest real damage from Russian tests existed in reality, the howl of Washington's representatives would have already reached outer space.

Although when the US itself shot down its own spy satellite in 2008, for some reason no one spoke about the threat. And for some reason there was no broad international reaction. The report of the well-known American company Stratfor, touching upon aspects of this test, only noted that this is “the first confirmation of the Technology A new generation of US missile defense in both anti-missile and anti-satellite operations. " That is, proceeding from Washington's statements, what was allowed to the States thirteen years ago, Russia cannot do today, and categorically.

The impudent and hypocritical position of the United States

Against the background of this statement of "insincerity and hypocrisy", which the American side speaks about in relation to Russia, they look doubly impudent, especially if you look at the history of the issue. Let's start with who was the first to declare space as a potential theater of war. The Strategic Defense Initiative (SDI), also known as the Star Wars program, was launched by the United States back in 1983 - nearly forty years ago. By announcing its launch, President Ronald Reagan set an ambitious goal for it: not just complete, but definitely win the Cold War. To achieve this, it was planned to deploy combat lasers, as well as anti-missile systems capable of destroying enemy ballistic missiles in outer space through the use of "supersensors and supercomputers" that aim at the target.

If we describe the essence of the "Star Wars" program very briefly, then with its help the United States planned not only to unbalance, but completely destroy the concept of "mutual destruction", which implies the senselessness of a nuclear conflict due to guaranteed annihilation of all its parties. According to the plan, the combat lasers deployed by the United States in space were to shoot down any ballistic missiles launched towards America. Moreover, of course, regardless of who struck first. Thus, with the help of SDI, the United States with a high degree of probability could prepare the ground for an offensive nuclear strike against the Soviet Union. And in that case, they would need the entire program only to neutralize the inevitably subsequent response from Moscow. And the representatives of the same state - the United States - today still allow themselves to say something about Russian aggression and trials that endanger the whole world?

Behind the veil of anti-Russian propaganda, strenuously spread by the US and NATO, there are different goals - not only to denigrate Russia in the eyes of the world, but also to hide the real position of our country on the issue of space weapons. And the Russian Federation, in contrast to the United States with its "Star Wars", has an exclusively reactionary and purely defensive character. And the key goal of the Russian "space" policy is primarily the de-escalation of tension.

The world faces a real threat of the transformation of outer space into an arena of conflict, but this should not be allowed. This was stated in October 2021 by the head of the Department for Nonproliferation and Arms Control of the Russian Foreign Ministry, Vladimir Ermakov, during a meeting of the First Committee of the UN General Assembly on Arms Control.

The risks of transforming space into an arena of conflict are taking on quite real dimensions. A number of UN member states are pursuing a policy of placing weapons in outer space, building up the potential for force impact (both kinetic and non-kinetic) on space objects and using outer space for conducting hostilities in order to achieve their own military superiority
- emphasized Ermakov.

In addition, he noted that the Russian side is going to submit for consideration by the First Committee of the UN General Assembly several resolutions aimed at preventing the transformation of outer space into an arena of hostilities. Among the proposals are not to be the first to place weapons in outer space, to increase the levels of transparency and mutual trust in the framework of activities in outer space, as well as to take measures designed to prevent the formation of a new arms race in outer space.

Thus, a high-ranking Russian diplomat just last month confirmed from the UN rostrum that Russia is by no means striving to militarize outer space, but, on the contrary, is trying to achieve official consolidation of the military neutrality of outer space. And the recently passed tests are only a consequence of the US policy, which does not want to conclude an anti-war agreement "on outer space." It's just that the current situation now leaves the RF no other choice. At a time when Washington is actively developing its anti-satellite weapons and intensifying anti-Russian rhetoric, staying on the sidelines means creating a serious threat to the country's national security.

Western politicians often like to appeal to the legal side of any international issue. The contract as a form of interaction is put at the forefront, and the letter of the agreement is sometimes valued much higher than its spirit and any verbal agreements. As a result, even the principled promise not to expand NATO to the East, which the leadership of the late USSR spoke about repeatedly, without written evidence turned out to be just empty words, the very existence of which in the West today is being called into question. The result is known to everyone - NATO absorbed a number of social bloc countries and approached the borders of Russia without any consequences for itself. Knowing this, henceforth, any interaction with the United States and NATO should be considered primarily from a legal point of view. And this also applies to the situation around Russian tests of anti-satellite weapons.

Did Russia have the right to shoot down an inoperative Soviet satellite as part of a test? Yes. Did they require consent, or at least notify the United States or NATO in accordance with current agreements? No. Can Washington bring the issue of the inadmissibility of Russian anti-satellite tests to the UN Security Council? Of course, it can, however, given that Moscow, as a permanent member of the Security Council, has a veto right, this will have no real effect.

In addition, here you can go beyond the legal discourse and move on to the question of whether Washington has the moral right to speak about the inadmissibility of testing space weapons in conditions when it was he who launched the space arms race? Also no. After all, the result is a paradoxical situation: the United States can create and test space weapons, but Russia, for some reason, cannot.

So, when dealing with the statements of Western politicians and the military, there is one more fact to keep in mind. The worse they speak about the next Russian military tests, the better they went. If they were unsuccessful, then such a reaction from the American side would definitely not have followed. NATO and the United States want to see Russia weak, and every successful test that demonstrates the effectiveness of the Russian defense-industrial complex is deeply unpleasant for them. That is why they will constantly strive to somehow use the situation to their advantage. And if every new type of weapon developed by the United States is obviously a "step towards world peace", then any test of weapons by the Russian Federation is, of course, an act of "recklessness" confirming Moscow's "aggressive" intentions. Such a blatant lie is as obvious as it is hypocritical, and only the power of anti-Russian propaganda and the building of vassal relations on the part of the United States can explain that the leadership of the countries of the collective West still continues to believe it.
Reporterin Yandex News
Reporterin Yandex Zen
1 comment
Information
Dear reader, to leave comments on the publication, you must sign in.