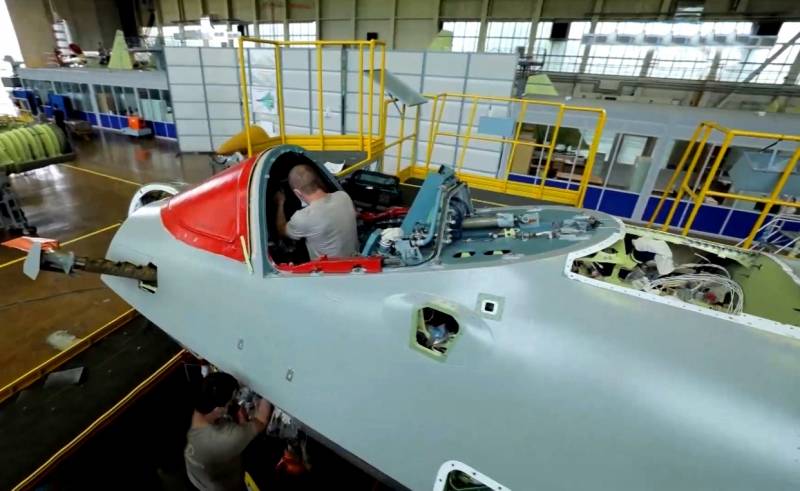 Like last summer at the MAKS-2021 air show, the promising light multi-role Su-75 fighter made a real sensation at Dubai Airshow-2021. Why is so close attention paid to the Russian Checkmate? Let's figure it out.


First of all, I would like to once again applaud the PR specialists of Rostec, who have released an absolutely gorgeous and witty promo video. Advertisers obviously do not eat their bread in vain. They clearly identified the target audience, potential opponents and competitors of our fighter, and also gave a very significant hint at the end, which we will talk about in more detail below. Now let's move on to the most enjoyable.

From the stage of "cartoons" project Checkmate surprisingly moved to the real production of them. It is stated that assembly of prototypes of the aircraft has already begun in Komsomolsk-on-Amur. The first flight of the fighter will take place in 2023, and serial production will start in 2026. So the "spiteful critics" who, after the bright presentation of the Su-75 at MAKS-2021, proceeded with poison, calling it "plywood" and "cartoonish", let them choke on their own poison. Why did Rostec manage to switch from computer graphics and full-scale models to real production so quickly?

There are many reasons for this. To summarize them, we can say that the Su-75 owes its appearance to the Su-57 (Felon according to NATO classification). The first Russian fifth generation heavy fighter was created with a lot of difficulties, many technical problems had to be overcome, caused by the overall complexity of such a project. But this also made it possible to use the existing Felon developments in Checkmate.

In particular, the Su-75 will receive the AL-41F-1 power plant (the so-called “Product-117”). This engine was developed at the OKB im. A. Lyulki specially for fifth generation fighters. Thanks to deep modernization, the maximum thrust force of "Product-117" has increased by 20%, the resource has increased by 4 times, the reliability has increased and the fuel consumption has decreased. This aircraft engine will be used on the Su-35S fighters, on the Su-75 light fighters, as well as on the first stage of the Su-57 heavy fighters. In the future, the Russian Felon will be equipped with two "Products-30", even more powerful and sophisticated engines. This suggests that this power plant in the future may appear on Checkmate, further increasing its tactical and technical characteristics.

By the way, about performance characteristics. The Su-75 in its current configuration has a takeoff weight of 18 tons, a service ceiling of 16 m, a practical range of 500 kilometers, and a maximum non-afterburner speed of 2800 M. -land "and" air-to-air ", simultaneously attack up to 1,8 targets. With a flight hour costing 7400 times less than the F-6, it is a more than adequate alternative to the apparently overpriced fifth generation American fighter jet, which is 6 times more expensive than the Checkmate. Unsurprisingly, the Russian plane is subject to constant information attacks.

Separately, I would like to mention the unmanned version of the Su-75, which was shown in its promotional video by Rostec. An airplane without a cockpit looked both frightening and attractive to the pilot. The transformation of a fifth-generation stealth fighter into an artificial intelligence-driven strike UAV will give the Russian Aerospace Forces a lot of additional advantages.

In this regard, the openly restrained reaction of the Ministry of Defense of the Russian Federation to Checkmate is perplexing. Are our military men offended that Sukhoi publicly offered its promising aircraft to buyers from the Middle East, and not to them?

The Su-75 can become an effective intermediate link between the few heavy twin-engine Su-57 and other fighters in the Russian Aerospace Forces. The low operating cost makes Checkmate very attractive for duty and regular air patrols on the western borders of Russia. Su-75 is the place to be, somewhere in the underbelly of the North Atlantic Alliance to fend off the threat from the American F-35.

Add to the above that Checkmate literally asks for the deck itself. Wide wings make it initially structurally suitable for takeoff and landing from aircraft carriers. The existing domestic carrier-based fighters are frankly old and need to be replaced for a long time. In the expert environment, the opinion was expressed that it would be worth adapting the Su-57 as a new carrier-based fighter for the Russian Navy. The problem is that these are quite expensive planes, which are not yet mass-produced, and the RF Ministry of Defense has ordered a very limited batch of them. The more budgetary lightweight single-engine Su-75 may be the optimal solution as a carrier-based fighter of the future.

Even if in Russia they are openly "hammered" on their own aircraft-carrying ships, in other countries, for example, in China or India, military thought is taking a different, perhaps more adequate path, and inexpensive deck-based stealth fighters will definitely be in demand there. Surely New Delhi will show interest in the deck version of the Checkmate.
Reporterin Yandex News
Reporterin Yandex Zen
23 comments
Information
Dear reader, to leave comments on the publication, you must sign in.