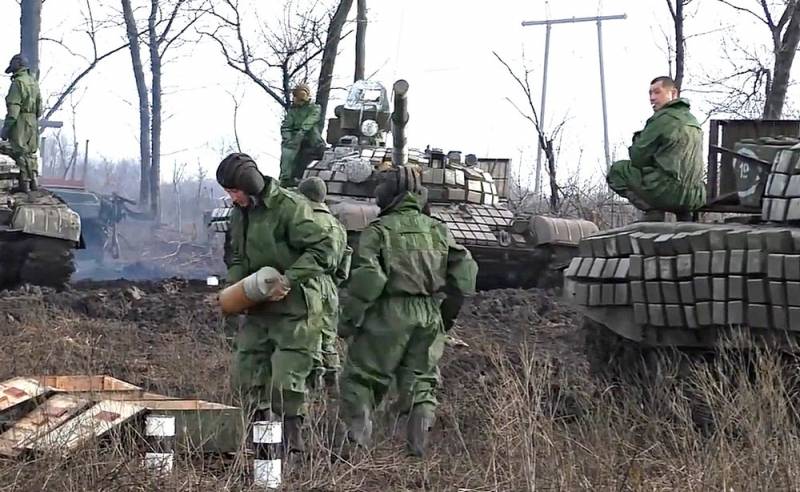 Despite the fact that the closest attention of the world media and the public is currently focused on the crisis on the Polish-Belarusian border and the accompanying "movements" in purely political plane, certain forces are doing everything possible so that the "Ukrainian question" does not "drop out" of the global agenda. Some people overseas even allow themselves to insist that the events taking place today on the borders of Belarus and the "non-foreign" are interconnected in the most direct and close way. They say that all these are parts of a single "cunning and insidious plan of the Kremlin."


When the paranoia of the "collective West" soars to such intensity, nothing good can be expected, of course. The most dangerous thing is that it is in the current time period that a number of circumstances are developing for Kiev in such a way that they may simply not see any other way out, except for military escalation. Such fears are of particular relevance in light of the fact that the Western "allies", previously at certain moments playing the role of a deterrent for the Ukrainian "hawks", this time stubbornly and openly push them precisely to aggravate confrontation. Let's try to figure out specific scenarios in which, instead of a shaky and wrong peace in the East of Ukraine, a full-fledged military conflict may erupt, and in the near future.

One gets the impression that the current exacerbation of psychosis regarding the "concentration of Russian troops on the Ukrainian border", which, we recall, was firmly denied at the initial stage in Kiev itself, is due to the newly awakened desire of some in Washington to stop the commissioning of our gas pipeline ... Moreover, as they say, at absolutely any cost. You say, were guarantees provided? There were promises to leave him alone, and at the highest level? So these are the Americans - the famous masters of their weighty word: they wanted - they gave it, changed their minds - they took it back. Not the first time, tea.

Moreover, while staying in the Old World and rotating there in a whirlwind of various summits and meetings, old man Biden, I remember, very strictly "demanded" something from Germany - certification of the pipe, it is only possible to delay, Ukraine "to guarantee the continuation of transit" almost not until, God forgive me, the Second Coming and the like. In Berlin, presumably, in response, they twisted a finger in the temporal lobe, knowing full well that these requirements are just as absurd in essence (and contradict the agreements previously reached with the United States), as they are technically impossible - at least in terms of "twisting our arms" Gazprom. It was after this that certain circles of American politicians, first through the media controlled by them, and then at the level of the state apparatus, began to promote the topic of "the impending invasion of Moscow."

Intrusive "warnings" and insistent demands "to take action in connection with the impending crisis" (everyone knows which ones) fell on the European Union as a whole and the leading countries - its members, separately already at the level of the United States foreign policy department. The leitmotif is quite unambiguous and clear: "Nord Stream-2" must be stopped, or Ukraine will not get it! " In turn, overseas "curators" are pushing Kiev itself to take action: “Do you need gas? Needed! So why are you sitting ?! Two or three large-scale provocations, one vigorous offensive - and the "golden key" of Russian transit is in your pocket! Moscow will certainly intervene in what is happening in the Donbass, we will accuse it all over the world of “using energy weapons” - and the job is ready! "

Ukraine, 90% of the state thermal power plants of which are switched off due to the banal lack of fuel, may well be led to such sweet speeches - in the light of the energy catastrophe coming very soon. In the end, a military disaster - is it not a fact yet ?! What if the allies still "fit in" and in one way or another prevent the defeat? Alas, being guided by just such a twisted "logic" and feeling behind the illusory "support" of the United States, Kiev may well decide to take active actions against the defenders of the Republics.

Scenario 2: "The oligarchs went out on a campaign"

The strongest factor of uncertainty in the possible algorithm of actions of Vladimir Zelensky, both in domestic and foreign policy, is brought in by the foolishness of his foolishness, completely out of place and at the wrong time, with those who should not be touched categorically. We are talking about the characters, practically all the time of the existence of the “nezalezhnaya”, who are its true masters and rulers, as necessary and of their own free will change the presidents, prime ministers and other political puppets in the country, who for one reason or another have ceased to suit them. We are talking, of course, about the owners of the largest industrial and financial groups in Ukraine, or, as it is fashionable to call them, the oligarchs. The "Maidan" of 2013 was, no matter what they said, the initiative and the project of just this category of persons, whose interests Yanukovych, who felt like a "tsar", decided to "move" in some way. The State Department, the CIA and other foreign structures joined in and took over control of the coup later, and it was representatives of the local, excuse the expression, "elite" that started the whole mess.

It is with them that the president-clown is now trying to "butt", it is not clear from what fright he imagined that he was able to survive and, moreover, to win in such a confrontation. Having “smashed the pots” with the most, perhaps, weighty and dangerous among the representatives of the local oligarchy - a native of the real, not fictional “Donetsk mafia” Rinat Akhmetov, this pea jester clearly chose an enemy beyond his powers.

However, all the other "aces" of the "non-profit" (except perhaps Igor Kolomoisky, whose project of the fool Zelensky, in fact, is) also, apparently, are very negatively disposed towards him. Paradoxical as it may seem, the former showman has chosen for himself in politics a course of action that one would rather expect from a “brother” from the “dashing 90s”, and not from a boy from a respectable family. The label he earned as a terry "outrageous" does not prolong life even in the harsh criminal world, to say nothing of big politics, which, in terms of dirt and cruelty, will give a thousand points ahead of any gangster "showdown". The use of illegal and legally unjustified sanctions of the NSDC obedient to the president to resolve absolutely any issues: from gagging political opponents and their media to banal and vulgar “squeezing out” other people's businesses, quite expectedly, was not limited to official “enemies of the people” like Viktor Medvedchuk. People who have certain power, influence and, of course, material values ​​in Ukraine today, are well aware that literally any of them can be next on the proscription list.

It is clear that even the theoretical possibility of the development of events in a similar vein is categorically not satisfied with them, and Zelensky's response will follow. The danger lies in the fact that based on the level of "intelligence" of both the clown in the presidential chair and his inner circle, it is easy to assume that the war in Donbass may seem to them in this case literally a "panacea". Thus, a miracle cure with which it will be possible to "solve problems" at once, to the maximum "tighten the screws" in the country, for example, within the framework of martial law.

Here, as a matter of fact, we are talking not even about any one variant of the development of events, but about various “variations on the theme” of the first two: “external influence + an attempt to solve internal problems”. Well, or, if you like, some "alternative options". Such may well arise, but the result they have, alas, will be the same - the outbreak of war in the East. It may well be provoked (both at the behest of the same local oligarchs, and on their own initiative) by Zelensky's political opponents, who are well aware that the most effective tactic against him now is the Nietzschean "push the falling one." The rating of the would-be president, who has completely lost the sympathy and trust of sane Ukrainians and has not gained, despite all his pitiful attempts, the support of the "national patriots" is rapidly sliding towards some 20%. But this cold and hungry winter has not yet begun ...

Add to this a crushing military defeat - and the clown will simply be taken out from Bankova, and not necessarily by "specially trained people." There is no end to those who wish already today, and the further, the more they will become. Zelensky, by the way, is well aware of this. He does not have the slightest degree of real "power" support. Army? He can appoint anyone as defense minister - even a civilian balabol (and his own accomplice in offshore companies) Reznikov, or at least one of his colleagues in the "quarter" ... In combat units and subunits, their own "commander-in-chief" is hated and despised quite openly.

Police? Yes, having survived from the chair of the Minister of Internal Affairs of the "unsinkable" Avakov, the president-clown gained nominal control over the utter misery into which this character turned the "organs". And he found another mortal enemy as a "bonus". That is why Zelensky sleeps and sees how to subordinate the National Guard to himself personally (this will officially happen from January 1 of next year) and to entrust it with truly unlimited "punitive" powers. At the same time, he completely forgets that this structure was created in 2014 by Avakov. Accordingly, it is completely "filtered" by his proteges and supporters - primarily in the form of the nationalist "volunteer battalions" that have joined it in full force. That is precisely why the option in which the Donbass will "blaze" not even by direct order from Bankova, but just by the will of those who dream of clearing it of "greenery" is more than likely. Yes, in fact, like any other that is possible in a situation when literally everything in the country goes out of control at all levels. In these conditions, anything can happen "by itself", up to and including war.

To our great regret, an increasing number of factors, both within and on the foreign policy agenda of Ukraine, are shaping up in a way that can lead to a sharp and sudden escalation of the armed confrontation in the Donbass. Let's not forget - wars break out exactly when someone tries to solve their problems with their help. “Nazalezhnaya” today is a continuous tangle of problems that simply do not have normal ways of resolving them. This is what Russia should take into account, building up its readiness not only to "provide humanitarian aid" to the residents of Donbass, which Vladimir Putin took care of in a timely manner, but to save their lives by all means that may be required in the event of Kiev's aggression.
Reporterin Yandex News
Reporterin Yandex Zen
7 comments
Information
Dear reader, to leave comments on the publication, you must sign in.