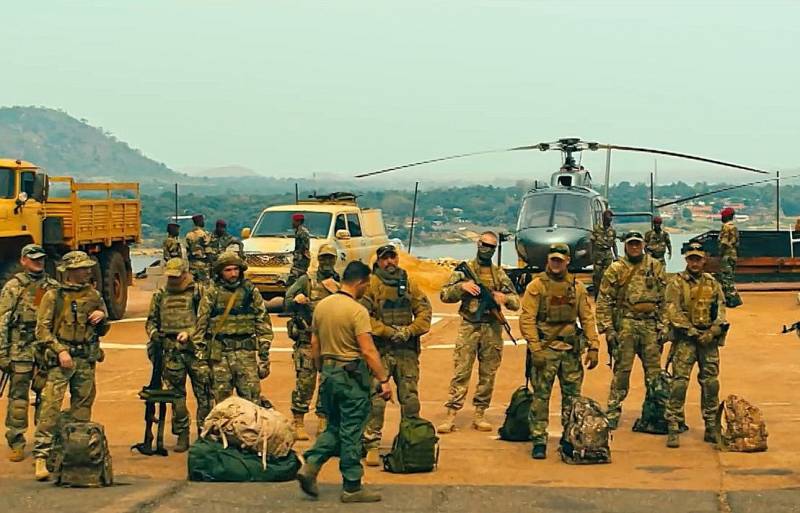 Russia has returned and is now gaining a foothold in Africa. Having lost the opportunity to open a naval base (PMTO) in Sudan due to the intrigues of the United States, we can now settle in Mali. The most interesting thing is that Russian soldiers are actually lured into this West African country by its former colonialists, the French. Let's think about what this might be related to.


In September 2021, speaking at the UN, Russian Foreign Minister Sergei Lavrov announced the interest of the Malian authorities in hiring a certain Russian PMC:

They turned to a private military company from Russia in connection with the fact that, as I understand it, France wants to significantly reduce its military contingent, which was there and was supposed, as everyone understood, to fight terrorists.
Presumably, we are talking about the so-called "PMC Wagner". It is noteworthy that at the level of the foreign policy department, the existence of such power structures was actually recognized, despite the absence of a legal basis for them. According to Jeune Afrique, the cost of the services of Russian military experts could be 9,1 million euros. At the same time, according to the information available in the public domain, the fee of the "Wagnerian" starts at 150 rubles per month. Allegedly, a whole line of those wishing to serve in the sands of the Sahara has already lined up. The interest of the mercenaries is understandable, but what was needed from the Russian PMC Mali? Why are the French themselves and the peacekeeping mission associated with them leaving?

Mali will not seem to anyone

Mali is located in the western part of the African continent in the Sahel region. This is a former French colony, part of the so-called Francafrica - the system of informal "tutelage" of Paris, thanks to which the Fifth Republic only grows rich, and its satellites remain poor. Mali shares borders with several countries, including Algeria and Niger, and through the desert there is free access to Libya. We will explain in more detail why this is so important.

This poor West African country is extremely rich in gold (the third largest reserves on the continent), phosphorites, bauxite, iron and complex ores, and molybdenum. There is also every reason to believe that Mali may have large deposits of uranium ores, since it borders on Niger, where France produces the bulk of the raw materials for its nuclear power plants. It is assumed that Mali may have its own oil and gas reserves, but this will not be possible to establish without detailed geological exploration. And it is very difficult to do this, since Mali has entered the era of coups and civil war since 2013.

The most interesting thing is that the West itself "rocked" this strategically important region. First, the United States launched the so-called "Arab Spring", and then, together with NATO allies, staged a military intervention in Libya. By the way, it was the French military that fought the most actively against the Gaddafi regime. As a result, this aggression returned like a boomerang to Paris itself. In the Islamic Legion of Muammar Gaddafi, there were many warriors from the Malian Tuareg tribes. After the defeat of Libya and the surrender of Tripoli, they returned to their home across the desert, taking many weapons. In northeastern Mali, they proclaimed the new independent state of Azawad in 2012. After that, confusion began in the country with a bloody civil war and a series of coups d'état, which has not ended to this day.

In 2013, France carried out a military intervention in this country as part of the Peacekeeping Mission (MINUSMA), ostensibly under the pretext of combating the Islamist threat. Indeed, in Mali, in conditions of chaos, the positions of Al-Qaeda (a terrorist group banned in the Russian Federation) have strengthened. However, other theories were actively circulated in the Western (not Russian!) Press and the blogosphere. In particular, they drew attention to the fact that in 2013 the Bundesbank demanded that France repatriate 2020 tons of gold by 375. In this regard, conspiracy theories were expressed that there was no German gold in Paris, as well as in the American Fort Knox, and the Fifth Republic decided to "democratically" improve its affairs by taking gold from the Africans. Also, the version that the intervention was aimed at protecting the interests of the state-owned company Areva, which wanted to protect its uranium deposits in Niger, and at the same time lay its hands on the Malian ones, was a common thread.

As you can see, France has something to defend in Mali. But why then did President Macron announce the reduction of his military contingent and the closure by the end of 2021 of part of the military bases in the cities of Kidal, Tesalit and Timbuktu, located in regions rich in natural resources? The question is really difficult.

On the one hand, the "peacekeeping" mission turned out to be unexpectedly difficult for France. The "Papuans" proved to be very belligerent, and the invaders suffered significant losses: 235 peacekeepers were killed, as well as over 380 UN military and civilian employees were wounded. The political the situation in the country was never stabilized, the northern regions are still under the control of the separatists. Mali has become for Paris his personal "Afghanistan".

On the other hand, an ambitious new player, Turkey, is preparing to enter this unstable region. Ankara is actively promoting its interests in the former Ottoman provinces in North Africa, but they are not limited to it. Thus, the great fears of Paris are caused by the views of the "Sultan" on the Sahel, which belongs to the traditional zone of French influence. President Erdogan regularly meets with the heads of various African countries. In September 2021, he expressed "Turkey's readiness to share its experience in the fight against terrorism with the friendly and fraternal Republic of Mali":

Ankara is determined to strengthen and continue cooperation in this area with Mali and the countries of the region, both through bilateral and multilateral mechanisms.
Let us note again that Mali may turn out to be rich in uranium, and Turkey intends to acquire three nuclear power plants at once with the assistance of Rosatom. At the same time, Mali is the "underbelly" of Libya, where the Turkish military has already entrenched itself after Tripoli signed an agreement on military-technical cooperation with Ankara. Mali's neighbor to the north is Algeria, which is rich in the hydrocarbons it supplies to Europe.

It turns out that if the Turks gain a foothold in Mali through their "proxies", they will be able to influence half of the African continent, as well as the energy policy of the European Union. By the way, the press has suggested that Ankara may be behind the next coup in Mali.

And what about the Russians?

Now it remains to ask the question, what have our "Wagnerians" to do with it? In words, the French and their allies in the peacekeeping mission were deliberately offended that the Malians were calling a Russian PMC in their place. In fact, they are undoubtedly happy. The level of losses clearly proves that fighting against experienced thugs in the Sahara is not sugar, this is not a night stall for you to guard. One gets the impression that Paris is ready to step aside a little in order to knock Ankara and the Kremlin head-on not only in Libya, but also in Mali. Does Russia need this?

Good question. While private traders are fighting there under contract for concessions for the development of resources by Russian oligarchs, this is their own business. But if they begin to send servicemen there through the Ministry of Defense of the Russian Federation?
Reporterin Yandex News
Reporterin Yandex Zen
5 comments
Information
Dear reader, to leave comments on the publication, you must sign in.