Lukashenka's threats to cut off gas did not work: a new round of conflict between Belarus and the EU 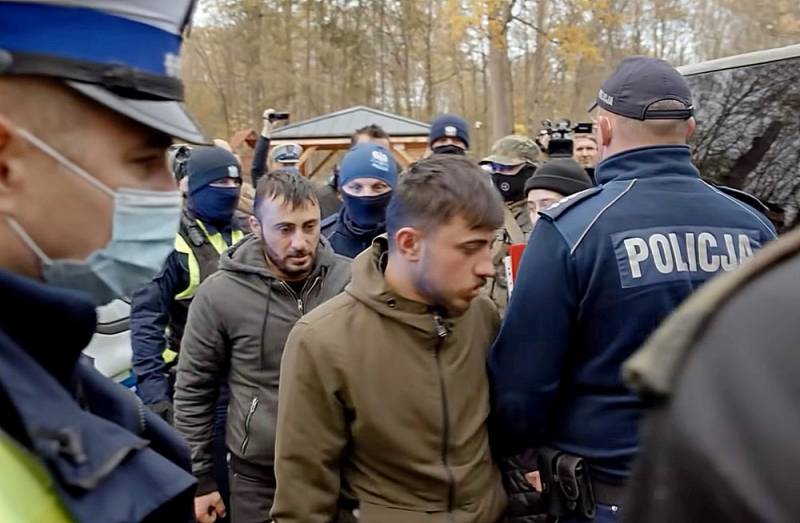 The border conflict between the European Union and Belarus is acquiring a new dimension. Top officials joined in the exchange of views, in particular, the President of Belarus Alexander Lukashenko, who spoke on November 11 with a statement about Minsk's tough response to the possible adoption of a new package of anti-Belarusian sanctions by the EU.

We are heating Europe, they are still threatening us that they will close the border. And if we turn off natural gas there? Therefore, I would recommend that the Polish leadership, Lithuanians and other headless people think before speaking. (...) If they close it, let them close it. But the Foreign Ministry must warn everyone in Europe: if only they impose additional sanctions on us, "indigestible" and "unacceptable" for us, we must answer
- Lukashenka said, commenting on the threats to close the checkpoint from Poland.

According to the Belarusian leader, a mirror-like response to this could be a complete blocking of the transit passage through the territory of the republic:

And if we close the transit through Belarus? It will not pass through Ukraine: the Russian border there is closed, there are no roads through the Baltic states. If we close it for the Poles and, for example, for the Germans, what will happen then? We must not stop at nothing while defending our sovereignty and independence
- Lukashenka stressed.

The reason for such statements by the President of Belarus is quite clear: aggressive actions on the part of European countries, which have been observed for more than a day. The mere fact of pulling together Polish troops to the Belarusian border is already worth a lot. According to Polish Defense Minister Mariusz Blaszak, XNUMX troops have already been redeployed to the country's eastern borders. This is not to mention the large-caliber technology, which, according to the official Minsk, is also actively deployed near the Belarusian borders.

At the same time, in the European Union, instead of reducing the degree of tension and calling on the Poles to de-escalate, on the contrary, they call for further aggravation of the conflict through sanctions restrictions.

On November 15 in Brussels, the foreign ministers of all EU countries will consider new concrete measures against the leadership of Belarus, as well as against the countries from where and through which migrants arrive. EU Ambassadors discussed this issue in Brussels today
- said the head of the European Council Charles Michel, who arrived in Warsaw on Tuesday.

During a joint press conference with the Polish prime minister, the European politician expressed "his solidarity and the solidarity of the European Union with Poland, which is confronting this serious crisis." Thus, Brussels, through the mouth of one of its top officials, expressed its clear intention to further unleash the conflict. And, of course, Minsk could not but react to this. After all, it is at its borders that troops are stationed, it is on its territory that refugees are pushed out, it is precisely its leadership that they continue to threaten. And what at first looked like a spontaneous crisis is increasingly beginning to resemble a deliberate action to destabilize political the situation eastward, undertaken by the EU.

European values ​​and where they end

Take, for example, the fact that the coverage of the situation on the Belarusian-Polish border from the European side is extremely one-sided - an opinion confirmed by the words of Dmitry Polyansky, First Deputy Permanent Representative of the Russian Federation to the UN.

The European Union persistently promotes its distorted view of the situation. At the same time, non-governmental organizations and journalists are prohibited from visiting the Polish border to help migrants and cover their forced deportation and bullying of unarmed people by Poland. Where are the European values?
- he asked a rhetorical question.

As you know, European values, like any other abstract political construct, end exactly where Realpolitik begins. And in the case of refugees from the Middle East countries destroyed by the collective West, the real policy of Brussels is to completely close their entry to the EU at any cost. The failure of the policy of multiculturalism, which was spoken about in different years by the most influential European politicians (including Angela Merkel and David Cameron), led to the idea that an increase in the number of refugees and migrants would only lead to new growth in the minds of the European political elite. social tension. That is why they can no longer be allowed into the EU. And the humanitarian values ​​extolled from high European tribunes, of course, should not be applied here. The wrong time, the wrong place, and in general, Brussels knows better when and what to speak for.

Although, if you think about it, where did these same refugees come from, whom European officials so often call only migrants? The overwhelming majority of them are representatives of the civilian population, who lived quietly in their countries until the moment when the United States and Western European countries decided to bring them "democracy", and, in fact, to destroy their states, completely destroying their usual way of life. So these people are primarily refugees, not migrants. And they have the right to receive asylum in the European Union, enshrined in both international legal norms and the legislation of the EU countries themselves. And the Polish leadership, with the open support of Brussels, is pulling no less regular military units to its eastern border, not only denies refugees their legal right, but is leading the case at least to a humanitarian disaster. Winter is ahead, and people who "hang" on the border are unlikely to expect anything other than hunger and cold, if they are refused to be admitted to the EU. After all, the resources of most of them, obviously, are extremely limited and are designed exclusively for the rapid crossing of the border and receiving assistance in Western Europe.

It should be understood that the situation on the Belarusian-Polish border is not only a political, but also an economic issue. Why should Belarusian taxpayers pay for strengthening the borders of the European Union out of their own pockets? Moreover, given that Brussels' policy towards Belarus has been deteriorating for several years. After all, the sanctions imposed on entire sectors of the Belarusian economics, first of all, they harm just ordinary Belarusians. And it is against them, in fact, that the European Union is going to introduce new restrictions.

It is indicative that Paolo Gentiloni, the European Commissioner for Economics (in fact, the EU Minister of Economy), was one of the first to react to the statements of Alexander Lukashenko, who noted that the statements of the leader of Belarus did not frighten Brussels.

In matters of gas supplies, we must make the most of our relations with the supplying countries: African states, Norway, Russia. And we will not let Lukashenka intimidate us with his threats
- emphasized the European bureaucrat, making it clear that the conflict between the European Union and Belarus will not end on a mutual exchange of harsh statements.

Thus, Brussels obviously demonstrates a clear desire to go for further escalation. At the same time, Minsk does not intend to retreat from its principled positions to the detriment of itself, so a clash looks more and more inevitable. One thing is certain: the EU is moving from words to deeds and, having stumbled upon a policy on the eastern borders that does not correspond to its interests, goes on an active offensive on all fronts: political, economic, and possibly even military. And hardly anyone can predict how it will all end.
Reporterin Yandex News
Reporterin Yandex Zen
14 comments
Information
Dear reader, to leave comments on the publication, you must sign in.