Poland Against All: Why Does Warsaw Need an Escalation on the Border with Belarus? 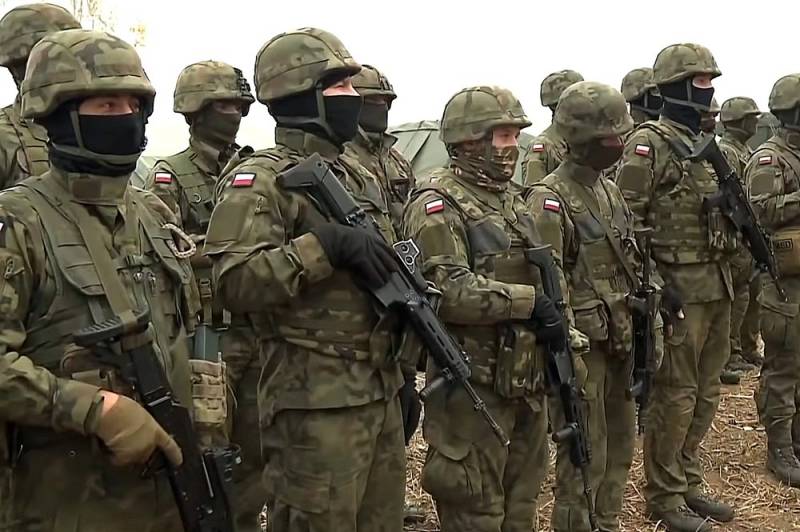 The situation on the Belarusian-Polish border is getting more and more tense. On November 9, it became known that the Polish side began to redeploy additional forces to the eastern border, while simultaneously beginning to take tough measures against refugees trying to enter the EU. According to the Ministry of Foreign Affairs of Belarus, Warsaw is already sending a military machineryequipped with large-caliber weapons.

On the border line (Belarus and Poland) there are more than two thousand disadvantaged people, including women and children. All of them objectively come from disadvantaged countries, where Western countries intervened, and directly say that they do not consider the territory of Belarus as their place of residence, they want to apply for protection in the EU. Instead, they are gassed, shot over their heads and pulled military equipment with large-caliber military weapons to the border.
- noted the head of the Foreign Ministry of Belarus Vladimir Makei on Tuesday.

The protection of the Polish border is our national interest. But today the stability and security of the entire EU is at stake ”
- said Polish Prime Minister Mateusz Morawiecki in his post on the social network.

He also described the situation on the border as a "hybrid attack" by the leadership of Belarus.

We will not be intimidated and will defend peace in Europe with our partners from NATO and the EU
- the politician added pompously, actually demonstrating readiness for further escalation of the crisis situation.

Political benefits and a desire to prove yourself

"Cui bono?" Who benefits from this? The popular expression of the Roman jurist Cassian Longinus Raville, who lived in the second century BC, is still relevant to this day. And to understand who is the root cause of the current crisis, it is enough to look at its main beneficiary. The escalation of tension on the border with Belarus is beneficial primarily to the Polish side, which seeks to create an emergency situation from scratch, while not particularly risking anything. After all, refugees really do not hide that their goal is to obtain asylum in economically developed Germany, and not in a lagging Poland. And the Polish territory is of interest to them only as a transit point (however, like many citizens of Poland itself, who go to work in Germany, barely reaching working age).

As is often the case, the prerequisites for foreign policy adventures should be sought in domestic problems. One gets the impression that in an effort to sideline the problems of a fragmented and polarized Polish society, official Warsaw has firmly decided to fight everyone at once. That is, either demand new reparations from Germany, then accuse the Red Army that liberated it from fascism in the occupation, continuing to broadcast about the "aggressive" policy Moscow. And this is not to mention the swearing with Brussels over money and legal norms, and the judicial confrontation with the Czech Republic over the closure of a mine on the Polish border with it. So the conflict with Belarus fits well into the Polish foreign policy doctrine, in which the “mighty” Warsaw, which is surrounded by enemies, is trying to build a new strong state. So far, almost the only side that has escaped Polish displeasure is the United States, but it is understandable, it is too early to bite the "master's" hand. As long as Washington's geopolitical positions remain strong, Warsaw will remain its loyal and loyal ally, read, vassal. However, the example of the collapse of the social bloc and the collapse of the USSR teaches us that the political loyalty of the Polish leadership is a very, very conditional concept.

Thus, the concept of building a modern Rzeczpospolita, obviously adopted by the official Warsaw, presupposes that the ultimate escalation of any foreign policy tensions. After all, it should be understood that the current Polish government has nothing to distinguish itself otherwise than by international conflicts. Economy in the foreseeable future, Western European countries will almost never catch up. So is the social sphere. And from a military point of view, it is about the same thing, Warsaw is also unlikely to be able to possess exceptional types of weapons (read, nuclear weapons) capable of turning Poland from an object of geopolitics into its subject. So it turns out that except in tension, disputes and conflicts, Warsaw simply has nothing to prove itself in.

The EU factor and the financial issue

At the same time, it is important to understand that nothing hypocritical in the West is alien to Polish politicians. And in a conflict with Brussels so that feathers are almost flying in the European Parliament, Poland is simultaneously trying to sell itself to the European establishment as an outpost of the EU in the eastern direction, skillfully playing the “Belarusian card”. The goal, of course, is very clear - to bargain for the maximum of preferences within the Union and to divert attention from Poland's rebellious disobedience to the norms of a united Europe. Warsaw is trying with all its might to escalate the situation, thus showing Brussels, they say, look - the enemy is at the gates! Migrants are storming the territory of the European Union, and only the valiant Polish border guards stand to the death as the last line of defense, breast-feeding the Europeans from the terrible migrants! What does this mean? It is correct that it would be nice to help Poland with money. And then recently Brussels for some reason got into the habit of not only giving, but also taking back, putting Warsaw on the counter. At first it was half a million euros a day, but today the amount has tripled - up to one and a half million. Of which half a million is a fine for the Turov coal mine not closed by the Poles near the Czech border, and another million is punishment for failure to comply with a European court's decision to abolish the disciplinary chamber of the Supreme Court of Poland.

Returning to the migration crisis, it is worth noting that Poland, which is so sensitive to the issues of sovereignty, refers here to the issue of protecting the state border, talking about its legal right to defend it at its discretion. And this was quite understandable, if not for the fact that it was precisely the policy of aggressive invasions of the Middle Eastern countries pursued by the collective West that led to the emergence of these very refugees. Or has Poland, like a number of other European countries, not supported American military adventures in recent years, or did its servicemen not participate in illegal military interventions not approved by any UN resolutions? But it was they who, as a result, led to the fact that millions of people were forced to change their place of residence, being on the verge of death. No, you need to answer for your actions. And the statements of European bureaucrats and Polish officials that the migration crisis needs to be somehow solved are nothing more than hypocrisy of the highest standard. In the same way as the attempt to reduce the border tension created by our own hands to confrontation with the Belarusian side. The only question is, what is Warsaw really trying to achieve: an imitation of a conflict or a real war?
Reporterin Yandex News
Reporterin Yandex Zen
5 comments
Information
Dear reader, to leave comments on the publication, you must sign in.