How Yeltsin almost drunk fled to the US Embassy

August 20 2018
2
The events of the tragic August 1991, when a liberal coup was carried out under the guise of the suppression of the “putsch of the State Emergency Committee”, affected the whole future history of the country. One of the key figures, as you know, in those days was Boris Yeltsin, whom the opponents of the USSR consider almost a hero for the collapse of the Soviet Union, and for how "spectacularly" he climbed onto the tank, using it as a platform. But there were other people who became eyewitnesses to the not heroic behavior of Boris Nikolaevich. 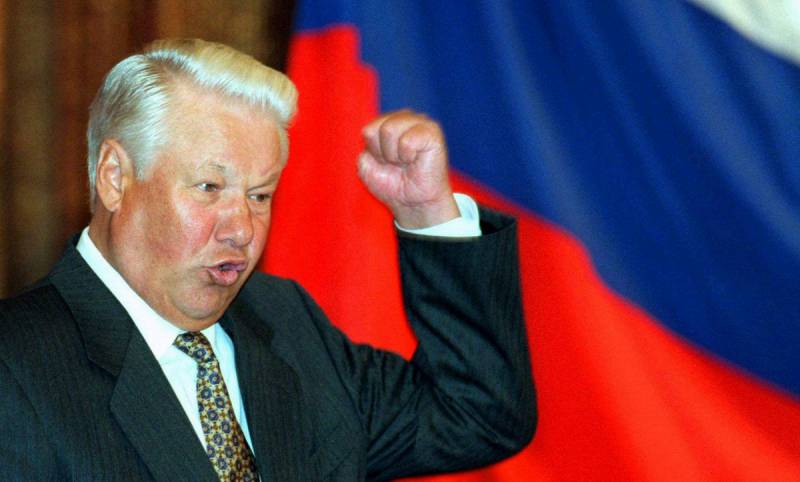 One of them was the ex-vice president of Russia, aviation general Alexander Rutskoi. In an interview with the newspaper Moskovsky Komsomolets, he shared the details of those August events. Rutskoi himself did a lot to bring Yeltsin to the helm of the state. Years later, he repents of this and expresses his deepest regrets - he said that “he succumbed to frank and impudent deception”

According to the testimony policy, in those days, Yeltsin not only went into a deep three-day binge, but also tried to escape from the barricades at the White House to the US Embassy. Yes, and after the victory, noted Rutskoi, Yeltsin left to "plump."

At the same time, the former vice president is not inclined to revise his then attitude to the members of the Emergency Committee. When asked by the newspaper’s correspondent which camp he would belong to now, Rutskoi replied that he would not be on the side of the GKChPistov, since he believes that their behavior was a “game” that could lead to the storming of the building of the Supreme Council of the RSFSR and the battle in the center of the capital . Moreover, in his opinion, these people at one time brought Mikhail Gorbachev to power.

By the way, speaking of Gorbachev, Rutskoi said that no one had isolated him - he simply escaped before signing the new Union Treaty. If that agreement were signed, then Gorbachev would not have been welcomed in the West now.

Former supporter (and then opponent) Yeltsin believes that the latter’s role in the victory over the State Emergency Committee was minimal. Everything was done by other people.

What victory would they celebrate if, at best, they were on the bunk, if Dunaev and Primakov and I had not brought Gorbachev to Moscow ?! I was not at this feast: the "grateful" Yeltsin simply forgot who organized the defense and led it, who did not let him get disgraced and fled to the American embassy, ​​who, at the risk of his life, brought Gorbachev to Moscow
- Rutskoi told bitterly.

He takes the blame for the collapse of the USSR, claiming that the vice-president of the RSFSR was not involved in the management of the entire Soviet Union. He would like to redirect this question to Gorbachev, as well as to the signatories of the Bialowieza Agreements (the then presidents of Russia, Ukraine and Belarus - Yeltsin, Kravchuk and Shushkevich).

He emphasized that none of this traitorous cohort had been punished, and undeservedly much attention was paid to Yeltsin’s memory:

The entire cohort of traitors is now alive, and not bad. Yeltsin died - his memory was immortalized by naming libraries, streets, a giant monument was built, the center of Yeltsin in Yekaterinburg

When Yeltsin went to sign the Bialowieza Agreements, Rutskoy accompanied him to Minsk, as Boris Nikolaevich claimed that he was going to sign an agreement on economic cooperation. After that, significant disagreements began between the politicians.

Upon Yeltsin’s arrival, I expressed everything to him that I think about this. He wrote a letter of resignation of the vice president. Yeltsin did not give a move
- he said.

In previous years, another leading politician of those years, the former speaker of the Supreme Council of Russia Ruslan Khasbulatov, spoke about Yeltsin’s non-heroic behavior at the White House. Like Rutskoi, he was also disappointed in Yeltsin’s politics. Subsequently, these disagreements led to the shooting of the building of the Supreme Council and its defenders, and Rutskoi and Khasbulatov, along with several other political figures, ended up in Lefortovo. This was Yeltsin's gratitude for the then support.
Ctrl Enter
Noticed oshЫbku Highlight text and press. Ctrl + Enter
We are
Ukrainian landing: a shame that cannot be washed away
Scolding everyone for demolishing monuments, Russia should look at itself
Reporterin Yandex News
Read Reporterin Google News
Ad
The publication is looking for authors in the news and analytical departments. Requirements for applicants: literacy, responsibility, efficiency, inexhaustible creative energy, experience in copywriting or journalism, the ability to quickly analyze text and check facts, write concisely and interestingly on political and economic topics. The work is paid. Contact: [email protected]
2 comments
Information
Dear reader, to leave comments on the publication, you must to register.
I have an account? Sign in