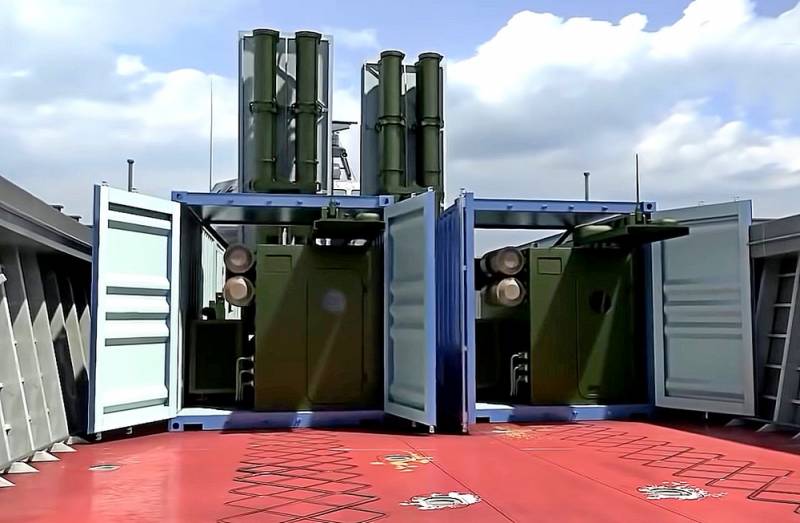 The growing interest in the Northern Sea Route from the West demanded from Russia to create ships like the Ivan Papanin multipurpose patrol icebreaker of Project 23550 Arktika. However, it is expensive to build such ships, and it takes quite a lot of time, which is not in our favor under current conditions.


As a result, domestic engineers came up with a simpler, cheaper and most importantly effective way to protect our northern transport artery. The new development is based on the legendary strategic train RT-23 UTTH "Molodets".

Recall that this train hid in its seemingly ordinary freight cars, both ICBMs and equipment for their launch. Given the fact that outwardly it was no different from other freight trains, it was extremely difficult to calculate and destroy such a train.

Something similar was implemented for cargo ships. Thus, Russian specialists from the Morinformsystem Agat concern fit four launchers for the 40M3 Caliber anti-ship missiles in a standard 54-foot container.

In general, the mobile battery of the complex, named "Caliber-K", consists of two launch containers and two control containers. The deployment of the complex into a combat state occurs in 3 minutes, and the radius of its destruction is 300 km.

The most important thing is that the aforementioned containers, as in the case of Molodets' wagons, are absolutely indistinguishable from millions of others and are installed on board in the usual way. Thus, a potential adversary will never "guess" which of our ships is carrying a "deadly surprise".

In the future, the Kalibr-K complexes are proposed to be installed on a multipurpose transport refrigerator under development for servicing the infrastructure of the Northern Sea Route without an icebreaker escort. If the project "sees life", then Russia will receive a cheap and versatile option for increasing the defense capability of our Arctic borders.