The end of the "Union": the Americans did not leave Russia a chance 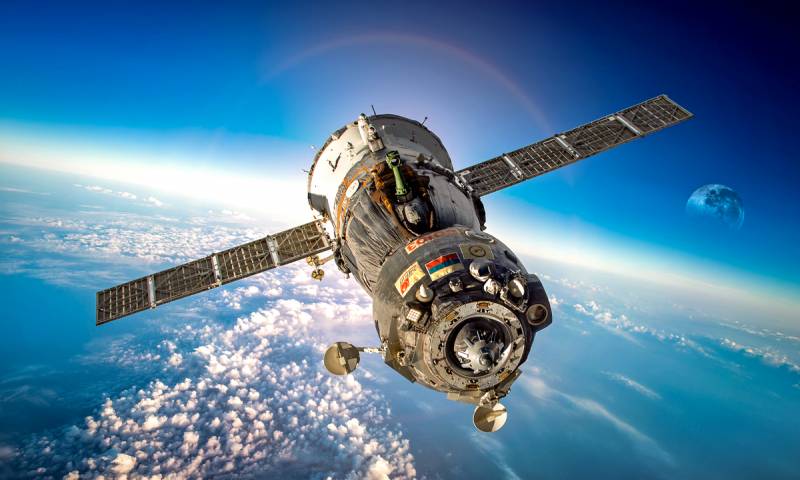 Now the Soyuz spacecraft is the only means of delivering crews aboard the ISS. It is also the only Russian manned spacecraft and one of the two existing manned ships in the world. As you know, the Chinese are quite actively developing their "Shenzhou" program: the ship built within its framework is, in fact, the Chinese version of the "Union". The Americans do not yet have their own manned spacecraft: the Space Shuttle made its final launch in 2011. Now, US astronauts fly on Russian ships. Europeans and Japanese dream of creating a full-fledged ship on the basis of their space "trucks", but whether this can be done is not known. Their space departments can only dream of such budgets as NASA, and there is much less experience than anyone else’s overseas partners.

From the outside it seems that everything is just wonderful for Russia: of the manned there are only “Unions” (even if one of them is Chinese). Why, then, is it increasingly common to hear panic among people close to the space industry? In reality, everything is much more complicated than it might seem at first glance. And that which the Soviet Union could rightfully be proud of at the time, now causes an embarrassed look to the side. The Soyuz spacecraft mentioned above made its first flight in the very distant 1967. To say that since then much has changed in the design of spacecraft - to say nothing. The Soyuz was also changing, but to the extent of the funds that Russia allocated for modernization and, more importantly, to the extent of the potential laid down in the design.

So, a ship, in principle, cannot be made much more spacious (the Soyuz series vehicles are quite cramped). The latest modification of the ship today is the “Soyuz MS”: the update affected almost every system of a manned spacecraft and, above all, electronics. But even a single glance at the device is enough to understand that we have before us a ship half a century ago. Even the Chinese twin brother of Shenzhou looks much more modern, although both of them belong to the second generation of manned spacecraft. 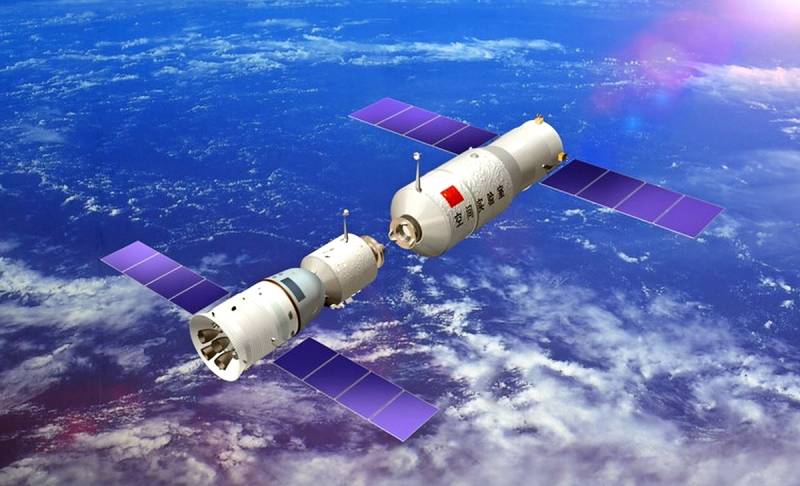 Not to say that they do not understand something in Roscosmos. And not to say that Russia did not try to create something to replace the Union. The most unpleasant thing was that there were such attempts, but they ended, to put it mildly, with nothing. The most illustrative example is the Clipper multi-purpose manned reusable spacecraft. He was shown to foreigners, built a full-size layout, but in 2006 the work was simply minimized. In turn, the first manned flight of the long-suffering “Federation” was recently moved to the mid-2020s: it’s hard to imagine where there will be analogues by then. Perhaps they themselves will be replaced by some fundamentally new reusable system, for example, the Big Falcon Rocket from SpaceX.

By the way, about analogues. There are several of them, all of them are from the USA.

- Dream Chaser. Developer - SpaceDev. Flight with cargo for the ISS is scheduled for 2020.
- Big Falcon Rocket (BFR). The exact date of the first flight is unknown. 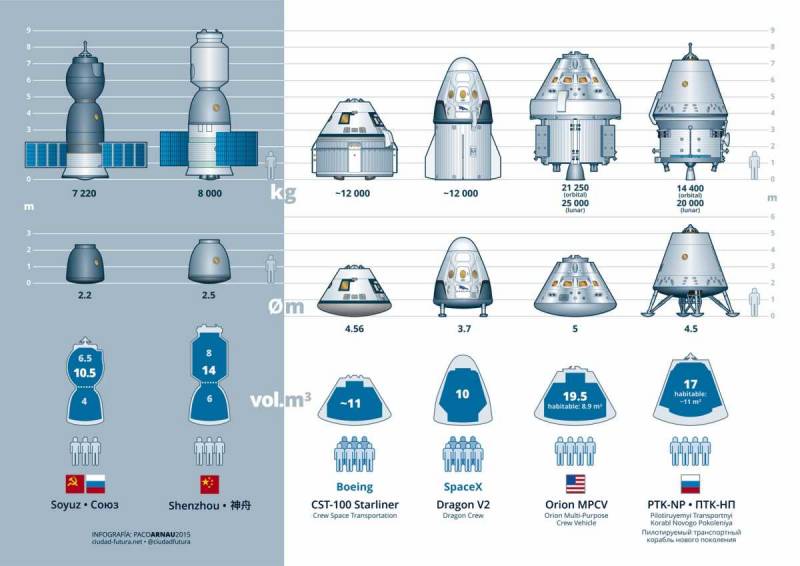 The Dream Chaser mini-shuttle and the BFR mega-shuttle are a bit from another opera. These are completely reusable ships (with a rather unclear fate). They are purely conceptually very different from the new partially reusable devices, such as Dragon V2 or "Federation". 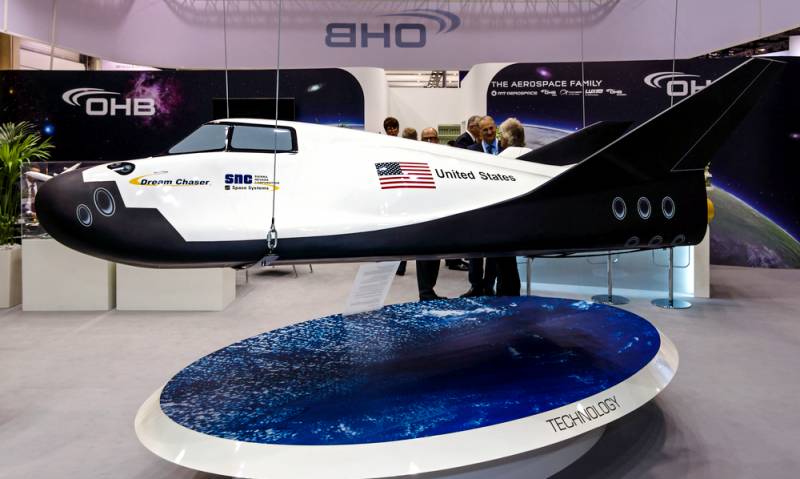 In general, competitors in Russia are doing not quite as well as one might think. Just recently it became known that SpaceX postponed the date of the first launch of the Dragon V2 manned spacecraft, as well as the first tests of the device with astronauts on board. Earlier, the dates of the first tests of its CTS-100 were postponed by Boeing. Mask company wants to carry out the first flight of the manned spacecraft Dragon V2 in November this year, and not in August, as previously planned. They want to make the first test flight with people on board in April 2019. For the CTS-100, they want to launch the first unmanned launch at the end of 2018 and the beginning of 2019. The first manned launch of the spacecraft was scheduled for mid-2019.

It is still difficult to judge the real benefits of the new spacecraft. But even a cursory glance at them is enough to understand how strong in terms of space of technologies The USA is ahead of the whole world. There is almost no doubt that the new Dragon or CTS-100 will be at least significantly more comfortable than its earlier counterparts. On board Dragon V2, you can accommodate up to seven crew members if necessary. For comparison, three people are placed in the Union. Inside the Space Shuttle, it’s probably even more spacious, but this program is forever gone. 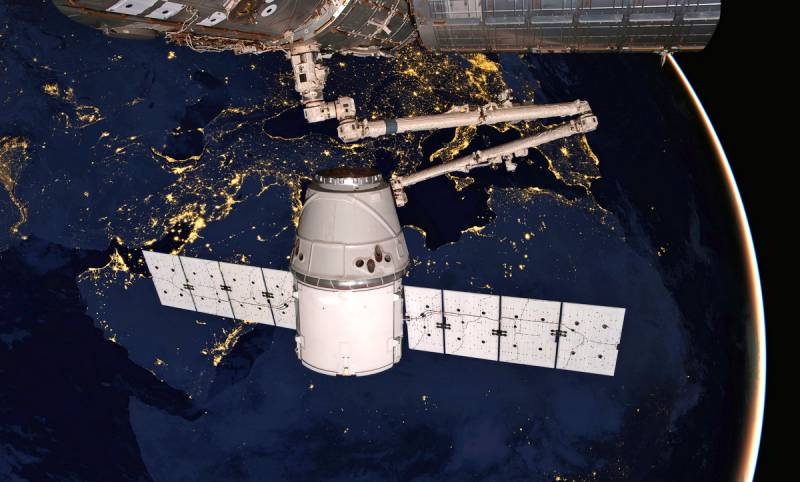 The security issue is more sensitive. If the Soyuz boasts 130 successful launches, the new ships only have to prove their reliability. And there is no way to accelerate. In general, there is almost no doubt that in the first half of the 2020s, the United States will abandon flights on Russian Soyuz completely. And if политическая the situation will continue to be just as tense, it can happen even earlier.

The future of the "Union"

The transfer of the tests of the "Federation" and the success of the Americans push Roscosmos to frankly strange actions and deeds. In June, Dmitry Rogozin said that you can fly to the moon on the modernized Soyuz spacecraft. “Manned flights to the moon can be carried out on Soyuz spacecraft even before the development of the Federation is completed. Initially, the Soyuz spacecraft was created under the lunar program, which means that its modernization is quite possible until we received a new spacecraft, ”the statesman said. Perhaps it makes sense to put in the “Union” three officials not burdened with good physical form and ask: are they ready to fly to the moon? It is clear that the ship by modern standards no longer meets the requirements of long-term expeditions. They are in theory responsible "Federation". In any case, if we proceed solely from its concept. 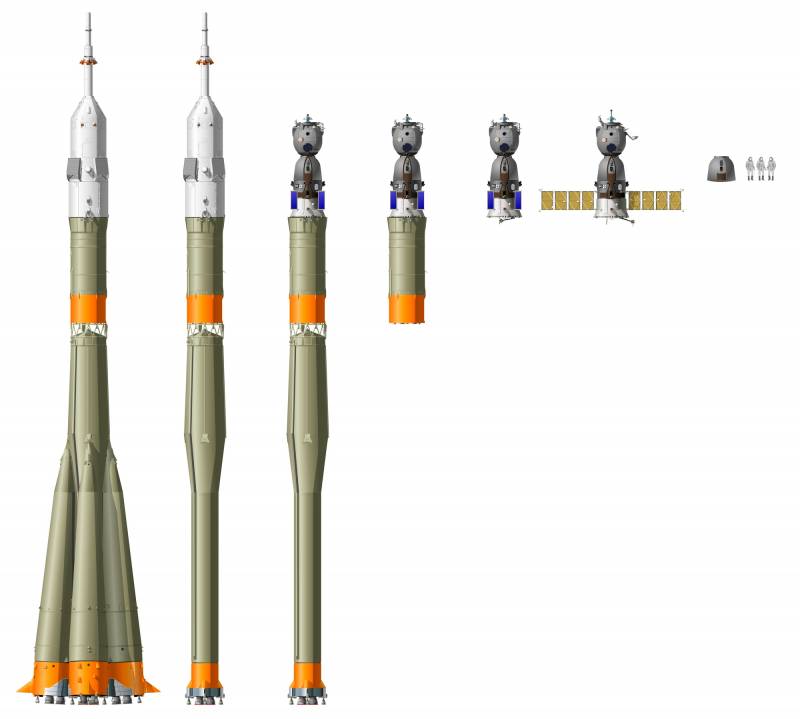 The plans to create an unmanned cargo version on the basis of the Soyuz spacecraft seem somewhat more real. Such a device even got its name - “Union GVK”: it is believed that it can be in space for up to 370 days. However, the project itself resembles a transfusion from empty to empty. Russia already has "Progress": this space "truck", as you know, is also built on the basis of the "Union". And for many decades, he has successfully completed his tasks.

The Soyuz spacecraft will go down in history as a very successful development of the Cold War. However, to predict a “brilliant” future for him would be unreasonable: the ship is morally obsolete and needs to be replaced. Otherwise, Russian cosmonauts will have to fly on American ships.
Ctrl Enter
Noticed oshЫbku Highlight text and press. Ctrl + Enter
We are
Dream Chaser: did the Americans steal the Soviet idea?
"Buran", which could: was there a chance for Russia?
Reporterin Yandex News
Read Reporterin Google News
Ad
The publication is looking for authors in the news and analytical departments. Requirements for applicants: literacy, responsibility, efficiency, inexhaustible creative energy, experience in copywriting or journalism, the ability to quickly analyze text and check facts, write concisely and interestingly on political and economic topics. The work is paid. Contact: [email protected]
11 comments
Information
Dear reader, to leave comments on the publication, you must to register.
I have an account? Sign in