New Glenn Rocket: A Media That Could Crush Ilona Mask 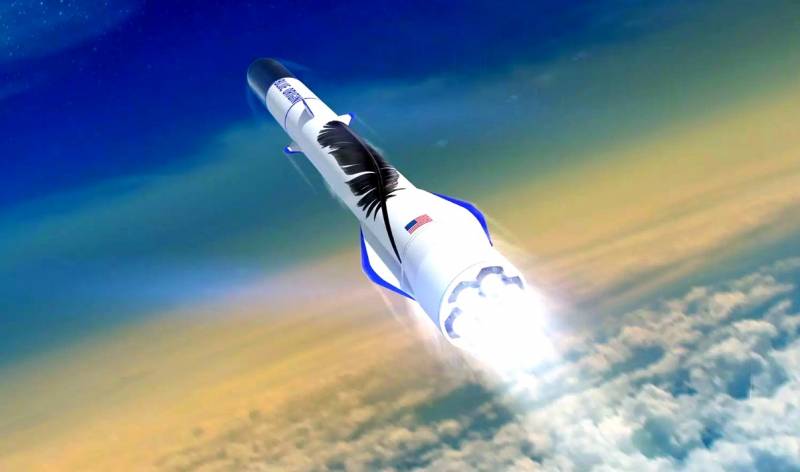 The main opponent of Ilona Mask is not Russia, Europe or China, but the richest man on Earth. This, of course, is about the founder of Amazon named Jeff Bezos. He is older than Musk: Bezos is now 54th, Ilona - 47. And, according to some journalists, he is not as “agile” and initiative as Ilon Musk. Bezos was not even jokingly or seriously compared once to a turtle. However, all this did not prevent him from becoming the richest man in history! In 2018, in the Forbes ranking of billionaires, he took first place with a fantastic capital of $ 149,8 billion.

Jeff Bezos spends his fortune not only on “beautiful life”, but also on space exploration. Moreover, the billionaire can also be considered an innovator, because his reusable New Shepard rocket from Blue Origin successfully returned to Earth, and this happened before the first successful landing of the first stage of Falcon 9. On the other hand, the New Shepard system is designed for suborbital flights, while Falcon 9 is a full-fledged heavy-class space launch vehicle, which, by the way, is now the most demanded on the market. Generally from all existing missiles. 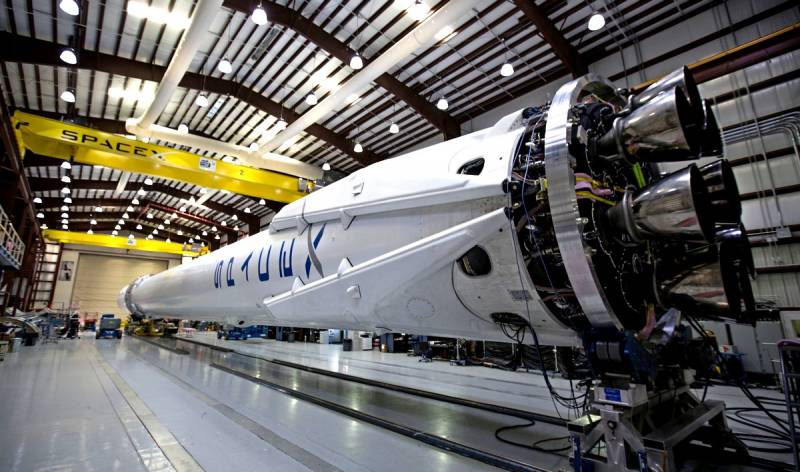 Cheap, reliable and actively promoted on the international launch market, the Falcon 9 has become a real headache for competitors who, as it now appears, have lost their market share forever. But some people do not despair and are ready to challenge the Mask, even taking into account the fact that, in fact, they never competed with him. It's about Blue Origin.

Reusability as a brand

Let several similar names not bother you: New Shepard and New Glenn are fundamentally different designs. The prospective New Glenn rocket should be the first "serious" Blue Origin rocket. Early design work on it started in 2012, and in September 2015, Blue Origin officially announced the development. In September 2016, Blue Origin specialists unveiled the design of the rocket and reported its official name - New Glenn.

Before us is a promising two- or three-stage heavy launch vehicle. It is assumed that it will be able to display up to 45 tons of cargo into a low reference orbit. At Falcon 9 FT, excluding the return of the first stage, this figure is almost 23 tons. SpaceX has a super-heavy Falcon Heavy, whose payload ratings are even higher. But do not forget that this is essentially a highly specialized superheavy launch vehicle, which will be used for single launches, such as, for example, launching heavy military satellites into orbit. For most commercial tasks, the power of the Falcon Heavy is completely redundant, and the launch price, even in the most optimistic scenario, will be much higher than that of the Falcon 9, since the Falcon Heavy rocket is much larger and more complex. 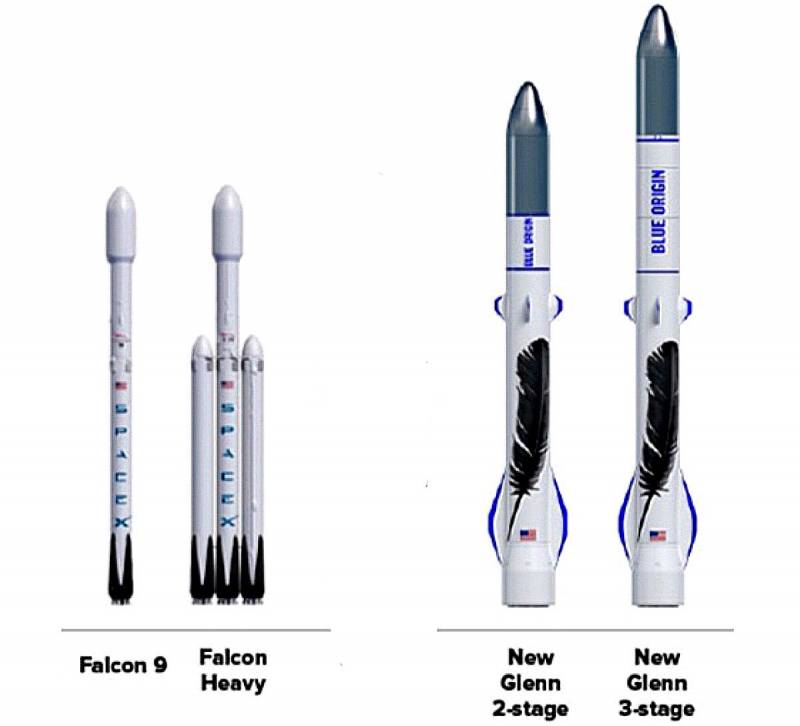 New Glenn will be able to claim the same market share as the Falcon 9. Yes, it is larger and heavier, but conceptually very similar to the work of Mask engineers. The presented images of New Glenn demonstrate the engineering "minimalism" inherent in the Falcon 9 and the Soviet "Zenith". Minimum blocks, maximum profitability. In theory, the assembly of such a rocket can be carried out relatively quickly and inexpensively.

The most important feature of the rocket, which in itself will make it a brand, is the notorious reusability. Re-use, of course, as in the case of the Falcon 9, it will not be possible to use the entire rocket, but only its first stage. In the animated video shown by Blue Origin, you can see the vertical take-off of the New Glenn rocket, the output of the payload into orbit and the landing of the first stage on the ocean automatic platform. Everything, like SpaceX. 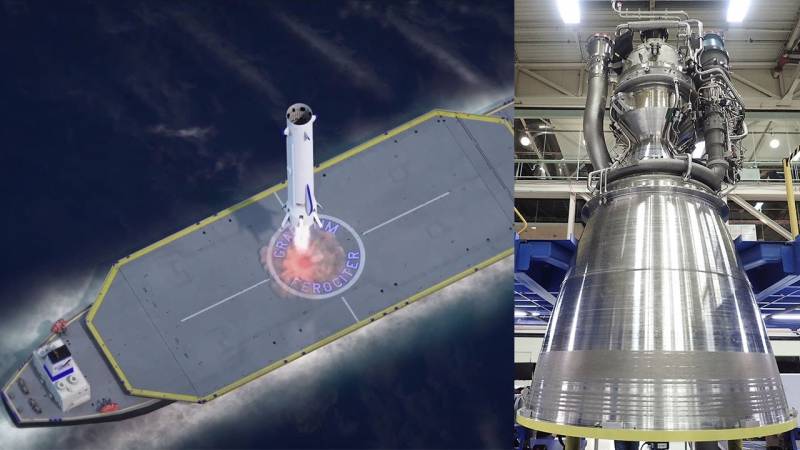 So why then the creation of Jeff Bezos will be better than the Falcon 9 rocket? Indeed, a higher load in itself can hardly be called an advantage. In fact, the trump card in the sleeve of Bezos may be that active work on New Glenn began later than on Falcon 9. When the methane revolution, in fact, had already taken place, although the promising methane engines had not yet managed to squeeze their kerosene “brothers”. Recall that Falcon 9 engines called Merlin use a kerosene / liquid oxygen fuel pair and in this regard are no different from Russian ones. Although Proton-M engines use toxic heptyl, this is not for long, because soon this missile will be replaced with kerosene Angara.

The creators of New Glenn have almost exactly decided on the device of the rocket. In the first and second stages, they want to use a BE-4 of their own design, which uses a methane / liquid oxygen fuel pair. The advantages of this concept over kerosene engines are several:

- Methane is cheap and affordable. It can even be mined on other planets (this is if someone is going to fly to Mars, for example);

- The use of a methane scheme allows to reduce the amount of soot formed in the rocket engines and, in general, minimizes technical risks;

- A pair of liquid methane / liquid oxygen is characterized by a relatively high density, which saves on the design of tanks and a number of other systems of the launch vehicle;

- The temperature of the methane in the liquid state is sufficient to effectively ensure engine cooling. 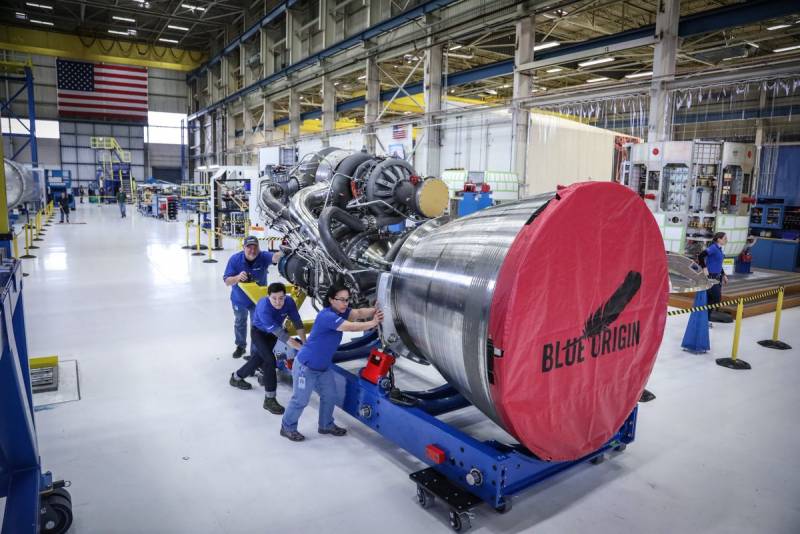 More recently, new methane rocket engines were considered "unnecessary toys of the West." Like, the potential of our products will last for many decades ... and in general, Americans buy Russian RD-180 for their Atlas-5. But in 2018, the general director of the Russian Energomash Igor Arbuzov was not so optimistic. “Methane today meets these requirements (the requirements of the modern market. - Note. Reporter) to the greatest extent, since it has a more developed raw material base and surpasses kerosene in energy,” said the specialist. In July of this year, it became known that Russian engineers began to develop a methane engine for launch vehicles. The product will be called RD-169, and its testing can begin in a few years. However, you must understand that the degree of availability of BE-4 is incomparably higher. He was repeatedly tested and demonstrated to the public.

By the way, it was the methane rocket engine (Raptor) that Ilon Mask chose for his promising Big Falcon Rocket. It has already been tested, but here is another question, more complex. Big Falcon Rocket is a truly powerful superheavy rocket, the development of which even with the experienced SpaceX can take many years. So in theory, Blue Origin can catch up with the company Mask and overtake.

The only thing that confuses a bit is that News there is relatively little about New Glenn, although it cannot be said that there are none at all. This can be partially explained by the fact that Bezos’s company is now absorbed in the tourist New Shepard. Recall that one of his tests took place recently - in July 2018. The ship rose to a height of 100 kilometers, after which the capsule detached from it and successfully landed by parachute. Another mini-victory in the piggy bank of Jeff Bezos. Of course, bringing closer the first flight of New Glenn.
Ctrl Enter
Noticed oshЫbku Highlight text and press. Ctrl + Enter
We are
New spaceship: the United States leaves Russia far behind
Blue Origin unveils plans for the "killer" SpaceX
Reporterin Yandex News
Read Reporterin Google News
Ad
The publication is looking for authors in the news and analytical departments. Requirements for applicants: literacy, responsibility, efficiency, inexhaustible creative energy, experience in copywriting or journalism, the ability to quickly analyze text and check facts, write concisely and interestingly on political and economic topics. The work is paid. Contact: [email protected]
3 comments
Information
Dear reader, to leave comments on the publication, you must to register.
I have an account? Sign in