Turkmenistan will be the first country to strike the Taliban 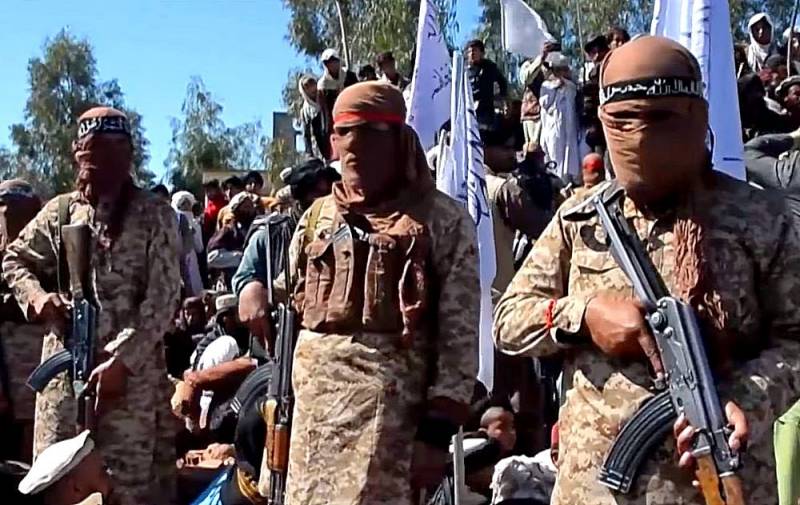 According to the militants of the Taliban, banned in the Russian Federation, about 85% of the territory of Afghanistan is under its control today. In order to become the only real legal force in the country and achieve legalization in the eyes of the world community, this group first needs to take Kabul, eliminating the dual power that is dangerous for it. On this issue, the position of Turkey, which supports the Afghan government and does not intend to simply withdraw its troops after the NATO allies, presents a certain problem for the Taliban. But what will happen after the Taliban and the Sultan still reach some kind of compromise, will the expansion of the ideas of radical Islam go outside?


This question is far from idle and worries all of Afghanistan's neighbors. The Taliban leadership, whose representatives recently flew to Moscow for talks, claim that they are all tired of the war and are only interested in the internal affairs of their country, which has barely managed to get rid of foreign occupiers. But the problem is that the group is far from united and not monolithic in its views and moods. This was confirmed by the special representative of the President of the Russian Federation Zamir Kabulov:

The movement does not stand still, the third and fourth generations of young passionary fighters appear who have never lived in a free, calm, unoccupied Afghanistan. And they are convinced that they are fighting for the liberation of their homeland from the occupiers and for the values ​​of Islam as they see them. This part of the movement is radically tuned, it is they who are now dying in hostilities.
And what will all these radical passionaries do when there is no one else to fight in Afghanistan itself? Where will they go then? The easiest seems to be the direction north to the former Soviet republics of Central Asia - Uzbekistan, Tajikistan and Turkmenistan. And Turkmenistan appears to be the weakest link in this chain.

The army of Tajikistan is objectively very weak. Its number is formally estimated at 8,8 thousand people, mostly poorly trained and poorly motivated, and another 7,5 thousand of the National Guard. By inheritance from the USSR, Dushanbe did not receive any huge military arsenals, like Nezalezhnaya. Armored forces include 30 T-72 units and 7 T-62 units, 23 infantry fighting vehicles and 23 Soviet-made armored personnel carriers. The Air Force does not have a single combat aircraft, there are only a few Mi-8 and Mi-24 helicopters. It can be concluded that the combat capability of the Armed Forces of Tajikistan is purely symbolic, and the real defense of the country is provided only by the Russian army, which is based on the 201st military base. Membership in the CSTO is the only guarantee of Dushanbe's security against a possible expansion of the Taliban militants.

Things are a little better in Uzbekistan. With a total number of 48 thousand people, 24,5 thousand serve in the Ground Forces. Each of the military districts has its own army brigade (motorized rifle, tank or airborne assault), fully staffed. Tank forces include 70 T-72 units, 100 T-74 units and 170 T-62 units, as well as 270 BPM-2 units. More impressive than that of Tajikistan. In addition, Tashkent has its own air force, including the MiG-29 / -29UB squadron, the Su-27 / -27UB squadron, the Su-24 bomber aviation regiment, two Su-25 / -25BM assault squadrons, the An-24, C295W and Tu -134, as well as two helicopter brigades Mi-24, Mi-26, Mi-8. In the post-Soviet space, the Uzbek army is in fourth place in power after the Russian Federation, Ukraine and Belarus, so it has something to meet the Taliban with. Note that this country is currently not a member of the CSTO.

Despite this, Moscow is ready to provide assistance to both Central Asian republics. Together with Tajikistan and Uzbekistan, Russian troops are preparing to conduct large-scale military exercises on the border with Afghanistan, aimed at eliminating bandit formations and ensuring territorial integrity. To fight against ground targets, a link of Su-25SM attack aircraft was sent. Such a bold hint to the Taliban leadership. And what, then, is left to the lot of young and audacious religious extremists?

That's right, Turkmenistan, the most closed of the former Soviet national republics. This country, which is not a member of the CSTO, in a sense has itself become a hostage of its "neutral status". With a number of 36,5 thousand, the Turkmen army consists mainly of conscripts, poorly trained and poorly motivated. This negates the importance of a considerable number of armored vehicles in service with the Ground Forces: 650 T-72 units and 4 T-90S units, as well as 650 BMP-1, 430 BMP-2, 300 BTR-70 and 450 BTR-80. Judging by the fact that Ashgabat strengthened mainly the Air Force and the Navy, since it was more interested in consolidating itself in the Caspian Sea, which is rich in natural resources. The aviation of Turkmenistan is represented by age-old Soviet aircraft, and the military fleet is represented by patrol and missile boats.

Five years ago, against the backdrop of the successes of the armed groups of Islamists in neighboring Afghanistan, Tajikistan and Turkmenistan already conducted demonstration military tactical exercises on the border. Even then, in 2016, military expert Khalmurad Soyunov pointed out the weakness of the Turkmen army and the fact that “sleeping” terrorist cells are even more dangerous than external aggression for this closed country:

The army of Turkmenistan, according to military estimates, is a weak link, it will not be able to resist even a thousand militants. After all, networks have already been created inside Turkmenistan, cells of underground Islamists, who are waiting in the wings.
It can be assumed that the most likely direction for religious extremists will be neighboring gas-rich and having access to the Caspian, but at the same time weak Turkmenistan, which is the most distant from Russia of all the former Soviet republics.
Ctrl Enter
Noticed oshЫbku Highlight text and press. Ctrl + Enter
We are
"We must beat first": the geopolitical alignment around Russia is continuously deteriorating
Ten "defeats" of Putin
Reporterin Yandex News
Read Reporterin Google News
Ad
We are open to cooperation with authors in the news and analytical departments. A prerequisite is the ability to quickly analyze the text and check the facts, to write concisely and interestingly on political and economic topics. We offer flexible working hours and regular payments. Please send your responses with examples of work to [email protected]
16 comments
Information
Dear reader, to leave comments on the publication, you must sign in.