New Crimean War will be the last for Great Britain 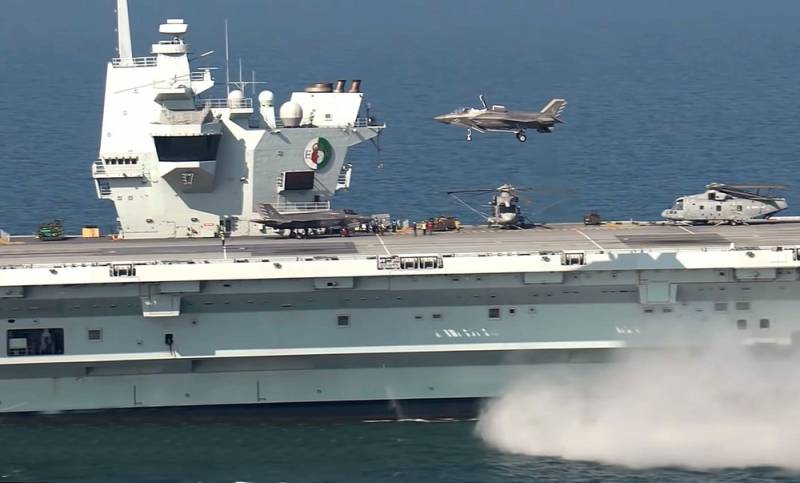 The "Collective West" has firmly decided to make another attempt to "put in place" Russia, or, at least, to test the strength of its borders. The initiator of this extremely dubious initiative is the most consistent and dangerous geopolitical enemy of our country - Great Britain. There, the question of the need to "contain" Russia and "curb" it is being discussed at the level of the country's legislative body - the parliament. The special report prepared by the members of the defense committee of his House of Commons is, in fact, nothing more than a clear program to oust our country from the Black Sea region and to weaken its positions as much as possible.


The fact that the "creativity" of gentlemen from parliament is by no means abstract speculation or empty talking shop is very clearly evidenced by the recent actions of the British land and naval forces, on whose account there are already quite a lot of provocations committed on our borders, and other actions. aimed at whipping up tensions in their immediate vicinity. How far can the aggressive aspirations of London and the "allies", incited by it to the anti-Russian demarches, go? What underlies the amazing self-confidence of the Anglo-Saxons, who increase the risk of a global armed conflict with their adventures? Let's try to figure it out.

Who will draw the "red lines" and to whom?

In the document I mentioned above, prepared by British parliamentarians, our country is traditionally held responsible for "subversive actions against neighboring countries" and even for "unceasing military aggression" against them. Naturally, I mean Ukraine, which the British continue to present as an innocent victim, claiming that Moscow is to blame for the "aggravation of the situation in Donbass" and the failure to comply with the Minsk Agreements, and not Kiev, which stubbornly refuses to implement them. On this occasion, the parliamentarians recall Russia’s spring deployment of troops to the Ukrainian borders, saying that the withdrawal of units and subunits that then took part in the measures to check the combat readiness was carried out "by no means in full." And from this moment not just claims, but demands begin. Moreover, they are extremely arrogant. The authors of the report declare that our country "must remove all its auxiliary military forces" not only from the border with the "nezalezhnaya" (because their presence is "a threat to young democracy"!), But also from the Russian Crimea. It turns out that the right to determine where, in what capacity and in what quantities the Russian military can be located does not belong to Moscow at all, but to London! This is something new…

The Kremlin's repeated reminders that Russia is, in fact, a sovereign state capable of independently making decisions regarding the deployment and relocation of its own Armed Forces in order to ensure its security, no one in London even thinks about. It is quite traditional, however. They continue to talk about the "illegal annexation" of the peninsula and the "destabilization of all of Europe", which is allegedly carried out by our country, and not NATO, which has turned the Old World into a continuous military training ground for its incessant maneuvers.

Moreover, the British take the audacity to declare that for Russia "red lines must be defined", the crossing of which "will trigger appropriate responses." Of course, all the North Atlantic Alliance is invited to act, but the role of the "vanguard", and, calling things by their proper names, the main provocateur, the British gentlemen are ready to take on with great willingness. So, the well-remembered recent attempt to break through by the Royal Navy URO destroyer Defender to Sevastopol, from which there was less than half a step before the armed conflict, in London is stubbornly called a "peaceful passage" and clarifies that such, no less defiant demarches will certainly follow in the future. The authors of the report we are talking about are confident that Britain "must assume the responsibility to ensure freedom of navigation in the Black Sea" and, first of all, firmly intends to "enjoy complete freedom of action in this area."

However, the British would not be British if they decided to expose exclusively their own destroyers under the fire of our anti-ship missiles. The role of the main supplier of "cannon fodder" in the coming conflict is destined, as you might guess, for Ukraine. This territory, like any colony of its own, is being turned by the British into a military foothold and an outpost directed against Russia, sparing no effort or money for this. The local parliamentarians directly point out in their document that London and its allies should generally not pay the slightest attention to Moscow's warnings that Kiev's accession to NATO and, in general, the further expansion of this bloc to the East will be perceived by it as an encroachment on the “red lines ”, drawn in the Kremlin. Gentlemen are confident that they have the exclusive right to designate something on the world map.

Alas, talks about "strengthening military cooperation with Ukraine" and London's desire to "strengthen its potential in every possible way" in confrontation with our country are not idle talk. This is evidenced by the sharply intensified recent actions of the British side to "build up the muscles" of the "nezalezhnoy". So, in the process of the recently held provocative exercises Sea Breeze 2021 aboard the same ill-fated destroyer Defender, an agreement was concluded between London and Kiev on cooperation in the field of military shipbuilding, providing for the supply of not only two minesweepers to Ukraine, but also eight missile boats. The most interesting thing is that only two of the latter are planned to be built in Britain. The rest, it seems, should be created with its help in the very "nezalezhnoy". Where and how they are going to do this after the inglorious death of the Nikolaev shipyard is deeply incomprehensible.

However, these are the problems of Kiev. For our country, it is much more important that the memorandum signed on board the violating destroyer speaks of "help" that the British allegedly intend to "provide to the Ukrainian side" in the creation of two naval bases - both on the Black and Azov Seas. And this cannot but cause alarm. Of course, the British in life will not be engaged in the construction of military facilities of this level for some natives there. We were going to build conscientiously - that means, exclusively for ourselves. In any case, even if the "zhovto-blakit" banner flutters over these bases, the "white sahibs" will rule there. And, therefore, their warships will be able to settle in the very immediate vicinity of our borders at any moment.

Exactly the same applies to the ground forces of the British army, which are currently conducting the Cossack Mace 2021 (Cossack Mace) maneuvers in the Ukrainian South together with the Ukrainian Armed Forces. Such, according to representatives of the "receiving side" "will improve the level of compatibility and interaction between the headquarters and units of the armies of Ukraine and the United Kingdom." Well, still - before driving the natives to slaughter, you should teach at least elementary commands and the most necessary actions. One gets the impression that London has firmly decided to repeat its own experience of almost two centuries ago, which went down in history under the name of the Crimean War. This armed conflict was provoked and unleashed against Russia exclusively by the British Empire, all the other participants played the role of "extras" and "support group". That, however, did not in the least prevent France and the Ottoman Empire, who were involved in this bloody adventure, from suffering human losses in its course, many times exceeding the victims of the British themselves.

Let me remind you that in London, starting the Crimean War, which was pompously called “the battle of civilization against barbarism,” the goal was not only to defeat the Russian Empire, but to actually dismember it and turn it into a downtrodden and disenfranchised quasi-state. The then head of the British government, Lord Palmerston, proposed to tear away from our country not only Poland and Finland, which belonged to it at that time, but also the Baltic states, Crimea, the Caucasus, Moldova ... Not weak appetites, isn't it? True, it did not work out with their satisfaction - Russia suffered a military defeat, but was not, as expected, utterly defeated, and this "Pyrrhic victory" was too expensive for the British and their allies.

Then, in 1854, who headed the very House of Commons of the British Parliament, whose members are now scribbling Russophobic plans, John Russell called for "pulling the fangs from the Russian bear" and assured his compatriots that "until the arsenals of Russia and its fleet on the Black Sea are destroyed, peace in Europe will never be. " Apparently, despite the past centuries, nothing has changed. In any case, in the minds of English gentlemen. A country whose public debt, according to the Office for Budget Responsibility (OBR), will exceed 30% of GDP in the next 120 years, continues to inject huge sums into the arms race, hypocritically repeating the "Russian threat" in the same way , as in the distant nineteenth century. The sums that London intends to invest in its own military programs in the foreseeable future are estimated at astronomical values ​​- not so long ago, it was about 80 billion pounds sterling "for the modernization of the army and navy", which is planned to be allocated in the near future, and 200 billion of military appropriations for the upcoming decade.

At the same time, Britain is well aware that its ground forces, with their outdated tanks and other technique in no case are they capable of withstanding the Russian Armed Forces in a large-scale clash. Obviously, proceeding from this, the Black Sea region was chosen as the point where the British lion is going to "try" our forces, in which the British expect to use their more or less combat-ready navy and aviation. Well, and in order to carry out provocations leading to the unleashing of a conflict and the subsequent "filling up with corpses" of the enemy, they expect to use the Armed Forces of Ukraine, somehow prepared by their instructors. These are not a pity.

To our great regret, those who today are making aggressive plans in London against our country refuse to take historical facts into account. The Russian Empire suffered its defeat in the Crimean War of 1853-1856 due to the technical backwardness of its army and the indecisive actions of its leadership. Today, those who decide to repeat this adventure cannot count on anything like this. The new war will be the last for its instigators.
Ctrl Enter
Noticed oshЫbku Highlight text and press. Ctrl + Enter
We are
Who actually won the Cold War and what the future holds for the world
"We must beat first": the geopolitical alignment around Russia is continuously deteriorating
Reporterin Yandex News
Read Reporterin Google News
Ad
We are open to cooperation with authors in the news and analytical departments. A prerequisite is the ability to quickly analyze the text and check the facts, to write concisely and interestingly on political and economic topics. We offer flexible working hours and regular payments. Please send your responses with examples of work to [email protected]
35 comments
Information
Dear reader, to leave comments on the publication, you must sign in.