Tikhanovskaya in Washington - another defeat of Belomaidan 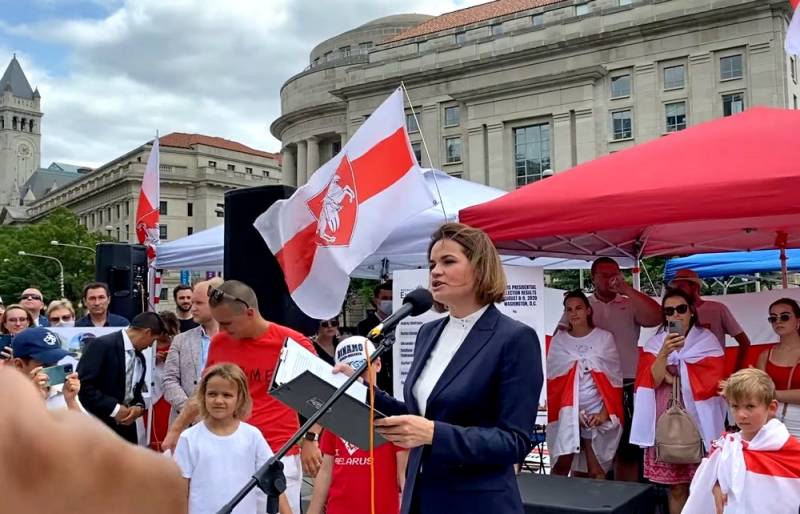 So, it happened! The foot of the self-proclaimed "president" of Belarus Svetlana Tikhanovskaya has finally set foot on the ground of the "main citadel of world democracy." "People's dreams have come true ..." Before the opposition leader, the doors of the "holy of holies" - the US State Department - were thrown open, where, according to available data, she was received and treated kindly almost like her own. Some in quite certain circles of characters, who have been muddying the waters for almost a year in a country that does not want to "take the path of democratic changes", are in a hurry to blow fanfare and open champagne. Is it worth it?


Among people who are not even adherents of Lukashenka, but who think in the slightest degree and are accustomed to operating not with emotions, but with logic and facts, the Washington tour of "President Sveta" evokes a fair amount of skepticism and not at all bravura. Those who objectively assess the situation in Belarus and around it are inclined to consider this trip a sign of the imminent victory of the local "Maidan", but, on the contrary, the surest sign of its imminent and inglorious end. Does it sound paradoxical? Nevertheless, this is most likely the case.

The last refuge of the "Maidan"

The fact that the person elected by the “collective West” to play the role of “face” and personified symbol of the Belarusian “color revolution” nevertheless ended up in that geopolitical center, where all such events, as a rule, are planned, directed and from where they are controlled looks more than naturally. Where else can the professional "Maidan workers" go, if not to the "city on the hill", ready to generously share the "radiance of democratic values" with all of humanity, whether it wants it or not? The catch in this case is that Tikhanovskaya arrived across the ocean, frankly, with nothing. Everyone knows - "white gentlemen" welcome either the winners, or those who have at least some real chances to become such.

But all this is categorically not about "President Sveta". Her arrival in Washington in the information space was accompanied by the news about the next blows that Minsk inflicts on almost the last hotbeds of the local "protest movement". His "mouthpieces" are closed methodically and consistently, and those who still have doubts about whether it is worth "playing the revolution" are given very clear and extremely tough lessons. Like prison sentences ranging from 5 to 9 years, which were received by 11 citizens on charges of "preparing to participate in riots and deliberately damaging other people's property." Severely? Well, it’s useless to fight the “Maidans” in any other way. Such actions of Alyaksandr Lukashenka and the “vertical” completely controlled by him nullify all of Tikhanovskaya’s claims and ambitions.

And all the more ridiculous against this background are the statements of the "leader" that she makes during her numerous interviews with the American media, going out of her way to please the host. For example, to the journalists of the National Interest, she inspiredly broadcast that the "revolution", of course, can win in Belarus, but only and only if it is headed by ... the President of the United States! None other than Joe Biden is able to "democratize" this country and set it "on the right path." Well, and at the same time - to throw some money "for the acquisition" when the "zmagars", with his help, who have seized power, as usual, will smash everything there to smithereens and in half. About a certain "Marshall plan for Minsk", which should be financed, as you might guess, again, the United States, Tikhanovskaya, too, talks about incessantly. What is in reality?

The owner of the White House, of course, did not meet with this lady - you never know what crooks and rogues are running around Washington, all, perhaps, "to the body"? But the Secretary of State of the United States Anthony Blinken condescended to communicate with her. At the same time, which is very characteristic, the American media repeatedly emphasized that he initially did not have plans for a meeting with Tikhanovskaya and everything was decided literally at the last minute. And then understand such a suddenness as you want - either the head of the State Department himself, for the sake of a brief conversation with "Tikhanovskaya herself", made adjustments to his schedule, or the head of the foreign policy department was forced to "pay attention" to the annoying visitor - since when ... she came. In any case, the publicly announced end result of the negotiations, frankly, is not impressive.

As follows from the official reports, "Mrs. Tikhanovskaya" discussed a very short list of topics with Mr. Blinken, as well as Victoria Nuland, who was present at the meeting, and State Department adviser Derrick Schalle. As expected, they talked about "the persecution of independent media and civil society", "the seizure of the Ryanair liner" and the "illegal migration" that Minsk allegedly "organizes to Lithuania." This is according to the Americans. The very same "President of the Light" subsequently listed a very strong list of "Wishlist", which she, as she claims, announced to the representatives of the State Department. Among them, of course, new sanctions against the “regime”, its “friends” and “wallets” (it is deeply unclear what and who is meant by the last two categories), the convening of a “high-level conference on the Belarusian crisis” (and for what purpose, in fact, ?), well, and, of course, a number of the lowest requests of a purely financial nature. "Zmagars" need blood from their nose "emergency help" for their persecuted and persecuted media in their homeland, sowing confusion on Telegram channels and similar projects.

No less money injections are demanded by “repressed representatives of the Belarusian business” (what does the State Department care about?), “Civil society” and “political prisoners”. And also - “Belarusian democratic forces in different countries”. In a word, it's as old as the world: "Give money, give money!" By the way, Tikhanovskaya also asked Washington to put pressure on Russia - "to give it a signal that all agreements and contracts signed by the regime are legally null and void and will be canceled." No, well, what are the Americans in general about this? Do you know what is the most interesting part of all this? Blinken reaction.

The Secretary of State got rid of the annoying beggar with an absolutely meaningless phrase that “he is in constant contact with the White House” (who would have thought!), And that he and President Biden “are constantly discussing the Belarusian issue”. Well, yes, they have nothing more to talk about. So what does Tikhanovskaya's Washington tour actually testify to? Alas and ah - about nothing positive for her. In order to understand this, one should, first of all, remember that the change of power in Belarus is a priority and beneficial matter, first of all, for Europe, and not for the United States. As we know perfectly well, Alexander Grigorievich does not have oil. And if the means for the own maintenance of the "zmagara" through the mouth of their leader are forced to beg overseas, this means, first of all, a sharp cooling to their project within the EU.

Yes, its most alternatively gifted members like Lithuania are still fuming - but the same Germany categorically refuses to put Tikhanovskaya on her neck and her gang. Even Poland does not show its former zeal and fervor in supporting this public. But this is only one side of the issue. Another, and much more significant, is that at the current stage, Lukashenka can only be “dumped” by completely “cutting off” him from help from Russia. From economic, financial, military - any. To do this, as you might guess, you need to enter into confrontation (and extremely tough) with Moscow, crossing the notorious "red lines", which Vladimir Vladimirovich has not tired of reminding of lately. But the “collective West” is not ready for this at all right now. First of all, naturally, Europe is going through the next stage of "gas education". However, the United States is also not in a position to finally quarrel with Russia - the Afghan crisis is in its hands, and other problems as well.

How wild it may sound, but at this stage Lukashenko with his periodically voiced impulses to "close transit through Belarus" is even beneficial to Washington! After all, in this way, by disrupting the logistics chains from West to East and from East to West, you can pretty much spoil the blood of both the Chinese comrades and our country. And the Europeans are at the same time. No, if Tikhanovskaya and the company had had even a tiny chance of winning, they would probably have been greeted differently and supported much more significantly. But there is no chance! The only application that the Americans can find for it is in long-term projects to create “the foundations of civil society” in Belarus. That is - the formation of self-controlled media, NGOs and other structures, declared today in Russia "foreign agents" and "undesirable organizations", which will gradually pour poison into the minds and souls of local residents, paving the way for a new "Maidan". By the way, the Western mass media, and at the level of the "flagships" of the information war, have for some time at once stopped calling Tikhanovskaya "the president of Belarus", as it was usual before. Mentioned exclusively as "ex-presidential candidate" or "opposition leader". Significant changes, isn't it?

However, she herself, apparently, understands this perfectly. In an interview with the same Tne National Interest, Tikhanovskaya unequivocally stated that she would not even participate in the "new, free and democratic" presidential elections when they take place. She, they say, is ready to be content with the role of "moral authority". Yes, "President of the Light" - and morality. You couldn't imagine any funnier. Apparently, in such a simple way, clearly realizing that her business is a pipe, the adventurer makes it clear to her potential employers from Washington that she is ready to take any place they offer and do what they order. As Ostap Bender said there: “I didn’t make a millionaire, I’ll have to retrain as a house manager”? The fact that Tikhanovskaya demonstrates her desire to somehow find a place under the wing of the State Department testifies in the most eloquent way: the Belarusian "Maidan" is on the verge of complete and final collapse, it has no real prospects.
Ctrl Enter
Noticed oshЫbku Highlight text and press. Ctrl + Enter
We are
Russia put Tikhanovskaya on the wanted list. Does the Kremlin stop flirting with the West?
Ten "defeats" of Putin
Reporterin Yandex News
Read Reporterin Google News
6 comments
Information
Dear reader, to leave comments on the publication, you must sign in.