"Glory to Ukraine": how the Nazi cry turned into the main greeting in the "Square" 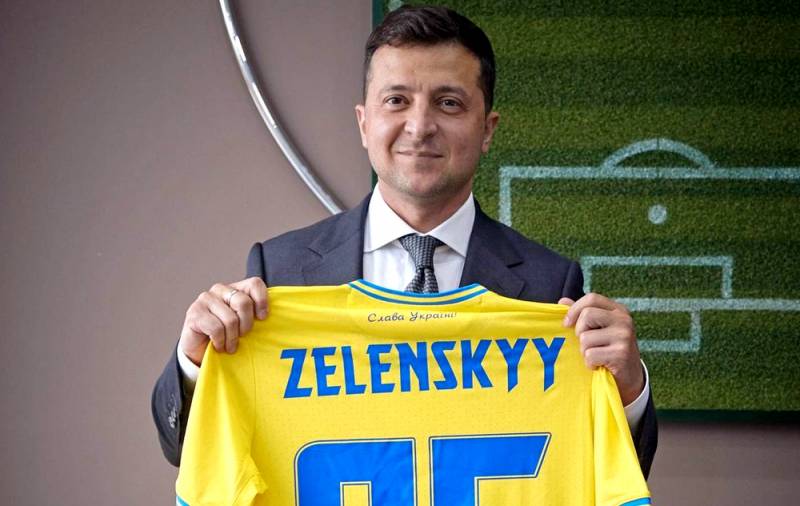 Fierce battles around the appearance on the uniform of the national team of Ukraine, which will play at the football championship Euro-2021 provocative inscriptions "Glory to Ukraine!" and "Glory to the Heroes!" not only do not subside, but also become more and more hot. They involve national and international sports organizations, representatives of various countries.


In fact, the scandal erupted after the official statement of the Russian Foreign Ministry that the words placed on the shirts of the players of the "non-profit" were a "Nazi greeting", which, of course, has no place at an international sporting event. But, perhaps, our diplomats, succumbing to emotions, thickened the colors a little and, as they say, went too far "? Let's try to figure out how substantiated the accusations and claims made by them are.

Since ancient times? Do not invent ...

No, well, really - after all, the French “Vive la France!” Does not shock or even irritate anyone, even if these words sounded from the tinned throats of Napoleon Bonaparte's warriors who passed through the whole of Europe with fire and sword and, ultimately who came with them to our land. What, it would seem, is the difference? Very tangible. Napoleonic campaigns took place during the times of empires, when the conquest of foreign territories was a common thing and even, one might say, everyday. At the same time, to the honor of the Corsican proud man, it should be said that he did not arrange concentration camps and "scientific" theories, according to which all non-French people should certainly be ruined, did not try to bring under his imperial claims. With the SUGS slogan (for brevity and in order not to repeat this muck once again, I will refer to it further as follows), the story is completely different.

To begin with, let us briefly recall once again what, in fact, said on this occasion, the official representative of the Russian Foreign Ministry, Maria Zakharova. According to her, the attempts of the current Kiev authorities to put the phrases we are talking about “into the mouths of the classics of Ukrainian literature” or to present them as “traditional Cossack greetings” are “completely untenable”. They take their origin from the Organization of Ukrainian Nationalists (OUN *), banned in Russia, and in addition are a very diligent copy of the exact same greeting adopted in the Nazi Third Reich. And, therefore, they can in no way be associated with the “historical roots”, “culture” or “spiritual heritage” of the Ukrainian people, but exclusively with the bloodiest and most infamous of its degenerates - Banderites, executioners and Nazi minions.

Which of all this is the truth with reliable evidence? To the credit of Mrs. Zakharova and her erudition, we must admit that everything. Let's start to understand the points. And they will help us with this publication on the most “patriotic” Ukrainian resources devoted to the history and etymology of the SUGS slogan. Fortunately, those are quite available on the Internet, including in the purest Russian language. Classics of literature, you say? Yes, some in “nezalezhnoy” are trying to pass off as the authors of these words the “main luminary” Taras Shevchenko or, for example, Pavel Chubinsky, who is credited with the authorship of the modern Ukrainian national anthem. However, here's the same bad luck - a discrepancy immediately pops up, visible to the naked eye even for those who are not philologists, professional philologists. There are indeed similar lines in the works of the aforementioned authors. However, they sound (for Shevchenko) as “… that's where the glory is. Glory to Ukraine! " The semantic difference due to only one letter, I think, there is no need to explain.

In the writings of Chubinsky, both "glory" and "Ukraine" actually exist, but in the most literal sense they do not stand next to each other. In any case, in the SUGS format - for sure. What's next? Cossacks ... Attempts to "fasten" the "greeting" we are discussing to the fanatically revered and almost canonized (despite their more than dubious real history) in the current "nezadezhny" Cossacks, if they are made, then only by the most illiterate and shameless "patriots". More sane "researchers" honestly admit that "Glory to Ukraine!" the so-called "Black Cossacks", a military formation that existed in 1918-1920, began to yell. Accordingly, this happened during the times of the "hetman" Skoropadsky, the UPR, the Petliura regime and other terrible and bloody events that left the most bitter memory and did not contribute to the prosperity of Ukraine in any way.

However, be that as it may - but even at that time the slogan, which today so tightly grabbed the official Kiev, existed in the form of only its first "half". Where did the second come from? Again, more or less objective authors from the most "nezalezhnoy" honestly admit - "Glory to the heroes!" as a response, it appeared in it only in 1939, being adopted at the second Congress of the OUN *, which took place, by the way (what a coincidence!) in fascist Rome. Yes, and initially it sounded somewhat different. The organization, which was strenuously copying all its "brothers" in misanthropic ideology, officially approved a "party greeting": "Glory to Ukraine! - Glory to the leader! " Now let's compare: Heil Hitler! Sieg Heil! ("Glory to Hitler! Glory to victory!"). What do we see here? Some similarities? Or rather, almost 100% coincidence?

Not only to completely dispel doubts, I will clarify that when pronouncing the above words, one should “raise the straightened right hand at a slight angle above the head” (quote from the materials of the Congress). Yes, yes - the very "Roman fireworks", as tolerant Western historians call it. Such intolerant types as I call this gesture a "zig", adopted at that time not only among the OUN rabble, but, first of all, among the Italian, Spanish, Croatian and other European fascists. Well, of course, in Nazi Germany. So the modern Ukrainian “patriots”, who openly “zigzag” at their own torchlight processions, do not “copy the Nazis”, but their own predecessors. Well, those, in turn, diligently monkeyed at the Nazis, on whom they worked with all possible zeal.

As a matter of fact, the creator of the OUN * Yevgeny Konovalets has been playing tricks with the German Abwehr since the days when no NSDAP was in power - at least since 1922. As soon as Germany became Nazi, the headquarters of this organization settled in Berlin. And the same Konovalets - even before, thanks to the brilliant operation of Pavel Sudoplatov, his fragments had to be scraped off the pavement of Copenhagen, publicly and in print called on "all Ukrainians" in a single impulse "to stand under the banner of the Fuhrer." After he finally got what he wanted, the OUN *, as you know, quickly split into "Melnikov" and "Bandera" wings, whose representatives ate each other better than the notorious spiders in a bank. In the role of "leader", each of the two ghouls, of course, saw himself - so he had to slightly correct the form of greeting, placing "heroes" there. Which Ukrainian nationalists have never been, of course, and could not have been. The German historian Grzegorz Rossolinski-Liebe directly states in his writings that the "Hitler's greeting" in the form of the SUGS was introduced by Bandera at the II Congress of the OUN * in Krakow in April 1941. And, by the way, it confirms the fact about the accompanying "zigging". But maybe the German is lying? It will become ...

Well, finally, let us turn to the testimony of a historical personality, who is an absolute authority for every Ukrainian “faithful patriot”. We are talking about a figure, frankly, extremely unsympathetic - the so-called Metropolitan of the Ukrainian Greek Catholic Church Andriy Sheptytsky. The most terrible anti-Soviet and Russophobe. He fully welcomed the collaboration of nationalists with Hitler and the Third Reich. He hated the "damned Muscovites" fiercely. But the SUGS slogan was not categorically recognized and openly criticized!

In the official publications of the rather rich “creative heritage” of this figure, one can easily find his message to his own flock, in which he called this greeting nothing more than “manifestation of godlessness” and a blasphemous attempt to distort the greeting “Glory to Jesus Christ ! " He was the author of the assertion that “Ukraine cannot be an independent state, let alone a“ glorious ”state without the will of God ...” Come on, you looked into the water. Exactly - it cannot. The same Sheptytsky called on "all Christians to fight the godless practices of Ukrainian nationalism." Quite strange of him - after all, this "shepherd" on the day of the capture of Lvov by the Nazis greeted the "victorious German liberating army", and after the fall of Kiev he began to scribble congratulatory letters to Adolf Hitler himself, promising him "to pray for the victory of the Wehrmacht." Bandera and all the other nationalist rabble cared for by Sheptytsky in everything inherited the "great Fuhrer" who, as you know, "abolished" God in the Reich, leaving his name only on the soldier's belt buckles - and then only because it had been there since the time of dear his heart is the Reichswehr ...

The true roots, meaning and essence of those phrases that today are foaming at the mouth are defended by the authorities of Ukraine and personally by its President Volodymyr Zelensky, are absolutely unambiguous and do not allow ambiguous interpretation. Behind them are the ashes of Khatyn, the blood of Babi Yar and the Volyn massacre, as well as a great many other horrific crimes committed precisely with these words on their lips. The statements of officials from Zelensky's office that these words, which have become disgusting and breathing death, “are absolutely correct and are written in the soul of every Ukrainian”, are an absolute lie.

Bandera's "chant" can be correct only for those geeks who shed the blood of their compatriots, first on the Kiev "Maidan", and then in Odessa, Donbass and many other places. This is really a Nazi cry, and, consequently, the uncompromising struggle that the representatives of Russia unleashed against its public use is the only possible reaction in this situation. The renaissance of Nazism must end, no matter how hard it costs.

* - an organization banned in the Russian Federation.
Ctrl Enter
Noticed oshЫbku Highlight text and press. Ctrl + Enter
We are
“With Russians it’s worth playing fair or not playing at all”
Where is Russia going?
Reporterin Yandex News
Read Reporterin Google News
2 comments
Information
Dear reader, to leave comments on the publication, you must sign in.