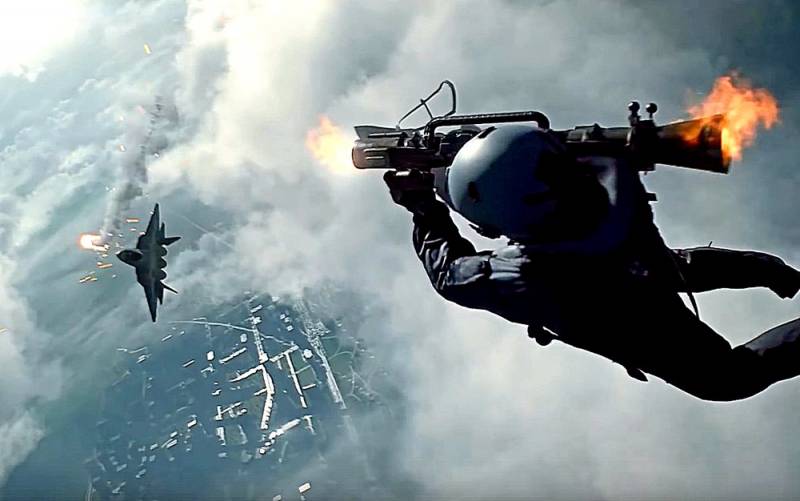 A render of a new part of the Battlefield game has appeared on social networks. The video shows one of the most "epic" moments of the action - the destruction of a Russian warplane by the Americans. Moreover, the "hero" acts in a very unusual way for such a situation.


The video demonstrates how the pilot of the American F-35 fighter watches the Russian Su-57 flying from behind. Then the American is ejected from the flying machine along with an anti-tank hand grenade launcher, directs it in the air at the "enemy" plane flying by and destroys the target. The F-35 pilot then returns to his fighter jet and flies away with a sense of accomplishment.


Let's leave the ridiculous trick of jumping out of an airplane flying at high speed and returning to it on the conscience of the Battlefield developers - a game is a game.

Russian users were critical of such destruction of the Su-57, here are some comments:

In the new version of the "Battles", the Russians were again exposed as a devil with their Su-57 and "Armata", and the brave Americans are winning all?

The US Army vs. US Army in films / games. And you also laughed at the Indian militants. They say you can't jump on a tractor
- Vladimir Krechetov drew an analogy.

It will be cooler than any Indian film masterpiece!
- Ilya Karpukhin echoes him.

So this is the only way to shoot down another plane with the F-35.
- Alexey Plotkin notes ironically.

Along the way, he was ejected without a chair ... Although, maybe he just "left", the devil only knows, is it possible ...
- Vladimir Vladimirov is trying to understand what happened in the video.
Ctrl Enter
Noticed oshЫbku Highlight text and press. Ctrl + Enter
We are
Without arms, legs and eyes: Soviet Heroes who fought even when they were disabled
Why do we need this Hartmann or the Rules of the war against the dead fascists
Reporterin Yandex News
Read Reporterin Google News
4 comments
Information
Dear reader, to leave comments on the publication, you must sign in.