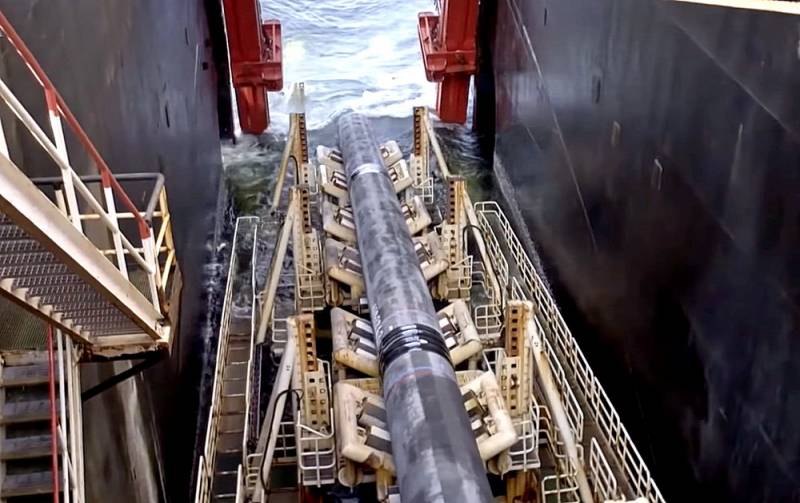 The day before, a small sensation took place at the international economic forum taking place in St. Petersburg. Speaking at it, President Vladimir Putin personally stated that the work on laying the first string of the Nord Stream-2 offshore gas pipeline has actually been completed. According to the forecasts of the head of state, the completion of the second line will take up to two months. And so Gazprom is almost ready to supply the first cubic meters of fuel to Europe bypassing Ukraine. Note that the tonality of Vladimir Vladimirovich's statements about Nezalezhnaya has now changed somewhat.


It's too early to open champagne, but let's summarize some of the interim results of the protracted epic with the long-suffering Nord Stream 2. Let us remind you that according to the initial project for this subsea pipeline, Gazprom intended to pump up to 55 billion cubic meters of gas annually, bypassing Ukraine. Together with Turkish Stream, the two gas pipelines were supposed to “nullify” Kiev's monopoly role as the main transit country for Russian gas to Europe. It is not for nothing that Ukraine, the Baltic States, Poland and the United States were categorically opposed to this energy project. Even Germany, the main beneficiary of Nord Stream 2, did not want to completely abandon Ukrainian transit, which it needs to maintain the huge Nezalezhnaya underground storage facilities in working order. In order to stop the construction of the gas pipeline and complicate its subsequent operation, the United States first achieved the extension of the norms of the EU's Third Energy Package to it, and then imposed direct sanctions against it. The unfinished pipe lay like a dead weight on the bottom of the Baltic Sea for a year and a half, violating all project deadlines. So what has changed now?

On the one hand, it can be concluded that Gazprom nevertheless managed to complete the construction of the underwater pipeline with a sin in half. This was personally confirmed by President Putin:

The entire linear work, including the offshore section, is completed. From the German side, the pipe came up, from the Russian side - they need to be lifted and welded. Everything. But the laying itself has been completed ... Within, there, one and a half - two months, two, probably, most likely, the second line will also be completed, I hope.
This means that it was not in vain that they drove from the Far East and then re-equipped the "Academician Chersky". How the state corporation was able to solve the issue of international insurance for the pipe-laying vessel, which is necessary for its operation in Danish territorial waters, remains behind a veil of secrecy. The Russian flotilla participating in the laying fell under US sanctions, but this did not prevent it from completing the gas pipeline. Gazprom has now gained valuable experience in independently laying offshore pipelines and is no longer dependent on unreliable foreign contractors such as a Swiss company. This is a positive point. The construction of a gas pipeline to the Slavyanskaya compressor station, which is its starting point, was also completed. Technically, there is not much left before the launch of Nord Stream 2: to carry out hydraulic tests, to fill the pipe in a test mode with nitrogen and then with natural gas. This can take up to two more months.

Against the background of similar News The change in the tone of Vladimir Putin's speeches regarding Ukraine immediately drew attention to itself, when the presenter voiced the fears of "Western partners" about the possible loss of transit income by Europe and Kiev:

Do you think we should feed everyone? Do we have such a duty - to feed everyone or what?
The Russian president has transparently hinted that he expects "goodwill" from Ukraine, and that the billions of dollars received from cooperation with Russia will be spent not on the army and an attempt by force to solve the problem of Donbass, but on development economics this country and improving the standard of living of the Ukrainian population. Indeed, some new notes began to sound.


On the other hand, it is still very premature to talk about a decisive and complete victory of Moscow over Kiev and the Washington behind it. Let's not forget that the completion of the construction of the Nord Stream-2 problem is by no means exhausted. First, it needs to be certified according to European standards, and the provision of such services to the Russian gas pipeline was under US sanctions. So, due to fears of falling under restrictive measures from the United States, the Norwegian certification company Det Norske Veritas - Germanischer Lloyd (DNV GL) has already left the project. Who will be able to replace her is still unknown, so the epic is not over yet.

It is not hard to guess that the "Western partners" associate the beginning of the actual operation of the Russian pipeline with the preservation by Gazprom of certain volumes of transit through Ukraine. In general, this was directly confirmed by President Putin himself, who said that Russia will continue to pump 3,5 billion cubic meters of gas a year through the Ukrainian GTS in the remaining 40 years, i.e. The 5-year agreement with Kiev remains in effect. Moreover, Gazprom does not intend to refuse from Nezalezhnaya services in the future if the demand for “blue fuel” in Europe grows. According to Vladimir Vladimirovich's estimates, consumption in the Old World will increase by 50 billion cubic meters per year, so the state corporation can continue to use the Ukrainian GTS to pump additional volumes, regardless of the presence of Nord Stream 2 and Turkish Stream. Independent income from today's $ 1,5 billion a year from transit can increase to $ 3, 4 or even $ 5 billion a year. In other words, it will not be possible to completely leave Kiev, but it will be possible to eliminate its role as a monopolist who has the ability to dictate its own terms.
Ctrl Enter
Noticed oshЫbku Highlight text and press. Ctrl + Enter
We are
Peace enforcement operation. Russia inflicts a preemptive strike on Kiev
Three years left: Ukraine will be sold in parts
Reporterin Yandex News
Read Reporterin Google News
7 comments
Information
Dear reader, to leave comments on the publication, you must sign in.