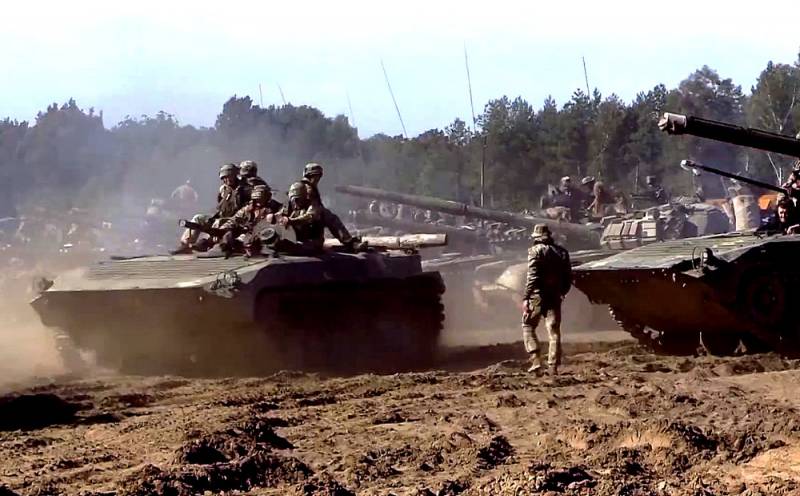 President of Ukraine Volodymyr Zelenskyy has submitted to the country's parliament a bill entitled "On National Resistance." Something about this "statesman" pathos has recently started to go off scale - he is going to develop a "concept of national resilience", now - resistance ... What is typical - also "national". However, if we discard the pompous verbal husk, then it immediately becomes clear that the speech in the proposed chapter "nezalezhnoy" normative act is about things that are quite specific. Namely, a radical reorganization of the so-called "territorial defense forces."


Now they represent a real misunderstanding, but with certain changes they can turn into a rather serious "power" tool. And Zelensky really wants him to be in his hands. Is he really preparing for an offensive in the East and "de-occupation" of Donbass? Not a fact, far from a fact. Rather, here we are talking about completely different intentions. Let's try to figure out which ones.

Again on the same rake

As a matter of fact, "national resistance" in Zelensky's understanding is nothing more than a set of specific measures and measures aimed at turning almost all of its population into "defenders of Ukraine". That is, to attract “the broad masses of the people” to arms. All this should, of course, take place "under the conditions of Russia's military aggression" in order to "restore national sovereignty." But the System of Territorial Defense (STO) should expand its activities today! Are you having a mild attack of cognitive dissonance? Let's not forget that Ukraine seems to be living in conditions of a kind of Russian aggression since 2014. At the same time, they were not officially at war. What to do - the country is like that ... Here, of course, one could laugh at the fact that the leadership of the "nezalezhnoy", even without engaging in hostilities with a real enemy, initially proceeds from the assumption that the entire territory of the country will be captured by them. Moreover, judging by the developed "strategic concepts" - without much difficulty and in the shortest possible time.

However, a slightly different sounding to Zelensky's ideas is given by the moment that, according to the bill he is pushing through parliament, all this “territorial” army should not only be formed in a completely peaceful time, but also be able to be involved in performing “a number of tasks and functions” without any war. Here we come to the most, perhaps, an interesting moment. Within the framework of the STO, Zelensky plans to create not only brigades assigned to the Armed Forces of Ukraine, but also volunteer battalions, with which Ukraine already had a great many problems at one time. The president, in fact, is eager to revive the most dangerous, uncontrollable and unpredictable armed formations, which the state managed to get rid of with great difficulty.

Arsen Avakov, who broke through the corpses of the "Maidan" into the chair of the head of the Ministry of Internal Affairs, was at the origins of the appearance of the obscenity that went down in history under the name of "good-hearted" As I have already written many times, the fact that they were created “to repel Russian aggression in the East” is a complete lie. Corresponding orders were issued in March 2014, when no blood was shed and no shots rang out in the Donbas. It was simply necessary to "utilize" the most violent "Maidan" men and get hold of a tool for carrying out the most bloody and dirty punitive operations. This is how the "good-natured" were born. Subsequently, this Makhnovist freeman turned into a serious headache for representatives of the Ukrainian authorities, already entrenched in their seats, at all levels. The fighting qualities of these formations were more than dubious, but in the matter of robbery, outrages and crimes against civilians, they had no equal.

Moreover, over time, these gangs began to interfere not only in the redistribution of property, but also in political "Showdowns" in the Ukrainian territories, which are very far from the "front line". They included raiding, smuggling and the most common extortion. It got to the point that these gangs had to be pacified, disarmed and brought to order under the threat of weapons. Some of them subsequently joined the ranks of the Armed Forces of Ukraine, some into the National Guard. And the same, not to be remembered by nightfall, "Azov" has completely turned into a state within a state - with its own political party and everything else. It would seem, why should the president of the country, which is not currently engaged in active hostilities, again pull out of oblivion and legitimize extremely dangerous formations, created of extreme necessity and liquidated with great difficulty? There is a sense here and it is even very obvious.

Is the comedian aiming for the Fuhrer?

The whole point is that the system of territorial defense, which Zelensky is now trying to mold from what was, in accordance with the bill we are talking about, will obey him and only him. Its subdivisions at the local level will be headed by governors, heads of districts and civil-military administrations - that is, exclusively people of the "presidential vertical". The General Staff of the Armed Forces of Ukraine in this configuration provides purely utilitarian tasks such as supplying personnel, organizing their training and the like. Moreover, he appoints the formation of chiefs of staff - "for the operational leadership" to the formations created within the SRT. However, only the head of state and his local plenipotentiaries will have the right to issue orders to this entire "parallel army" on a global scale. Here is the answer to the question: "Why volunteer battalions?"

To date, control over the absolute majority of the structures and divisions into which the "volunteers" of the 2014 model have become is retained by their "father" - Arsen Avakov, who has significantly gained weight, influence and ambitions over the past years. By the way, the police and the National Guard are also subordinate to him. Zelensky, to whom the radicals who broke through to his office this year (who acted without the slightest hindrance from Avakov's subordinates) very convincingly showed "who is boss in the house," is categorically not satisfied with this situation. In fact, the entire bill "On National Resistance" is an attempt to create a real counterbalance to the seemingly omnipotent head of the Ministry of Internal Affairs, his people and structures. Such intentions are especially relevant in the light of the upcoming presidential elections, during which Zelensky, apparently, is not going to give up power at all.

In accordance with the provisions of the presidential bill, no one is going to send volunteer battalions created within the framework of its implementation into the zone of active hostilities. But they will be able, for example, to be involved "in the implementation of tasks for the protection of public order" or "ensuring the safety of especially important facilities" in their native settlements. Let's be frank - such formations, properly armed and equipped, can easily "drive under the bench", or even simply shoot the local police and quickly establish control over all key infrastructure facilities - communication centers, train stations, entrances and exits from the populated item. And if need be - then arrange a "night of long knives" for their "colleagues" who thought a lot about themselves from the same radical nationalist organizations, who were scratching "sucker" on the doors of the presidential office. Not such a sucker, as it turned out ... "Incredible assumption" - you say?

Let us not forget that the abbreviation SS, which is disgusting and hateful to all normal people today, stands for "security detachments." And their predecessors - the SA stormtroopers who "lost their shores", were "cleaned out" by the members of these detachments. It looks like Zelenskiy has set his sights on creating his own security squads. Targeting the Fuhrer? Why not? The previous one was an artist. This comedian ... Little difference. Except that the first had to climb to power a long and difficult way - through war and prison, while the second already has power, and quite a lot ... There is a different sense in creating "parallel" territorial armed formations controlled by the president personally, except for his desire to remain in his own chair. as long as possible and to protect yourself from attempts to force "shake it out" from there, simply can not be. Well, are we not going to take seriously the nonsense about "aggression"?

True, there are some nuances in the proposed bill that make it possible to assume that it was prepared by "experts" who were not at all burdened with intelligence and the ability to calculate the elementary consequences of their own decisions. For example, the clause that the fighters of the new "dobrobats" will be able to arm themselves with "their own hunting weapons." For complete clarity, I will clarify - in Ukraine, this category includes not only smooth-bore guns, but also completely army models of carbines and rifles - from the good old Mosinoks and Mauser Kar.98 to quite fresh Kalashnikov assault rifles of various modifications. The trick here is that disarming the Arkharovites, equipped with "trunks" in their personal property, will be more than problematic later on. Even if they suddenly break out of obedience, which is quite likely, knowing the mores of such a public.

Even more interesting is the question of funding the "dobrobats". No, the desire to save as much as possible on everything (as in the case of weapons) is, of course, understandable. However, the norm introduced into the bill that the provision, including the monetary of these formations, can be carried out not only at the expense of the state and local budgets, but also "from any sources not prohibited by the legislation of Ukraine" - this is a direct way to create your own "Fighting squads", and even real armies by local princes and those who are called oligarchs in the "nezalezhnoy". By the way, Igor Kolomoisky, with whom Zelensky now has rather tense relations, achieved great success in creating "volunteer battalions" completely under his control. And in general, the president seems to have promised to "fight the oligarchs" in the most merciless way and to root them out. It would not turn out exactly the opposite.

In fact, hiding behind false statements about the "danger of Russian aggression" and trying to satisfy his own power ambitions, Volodymyr Zelenskyy, with his initiative to create a Territorial Defense System, is laying a mine of such power under the fragile remnants of Ukrainian statehood that can finally smash the country into small pieces. And he himself, by the way - too.
Reporterin Yandex News
Reporterin Yandex Zen
21 comment
Information
Dear reader, to leave comments on the publication, you must sign in.