Biden's show of political unpredictability may end with Trump's rule 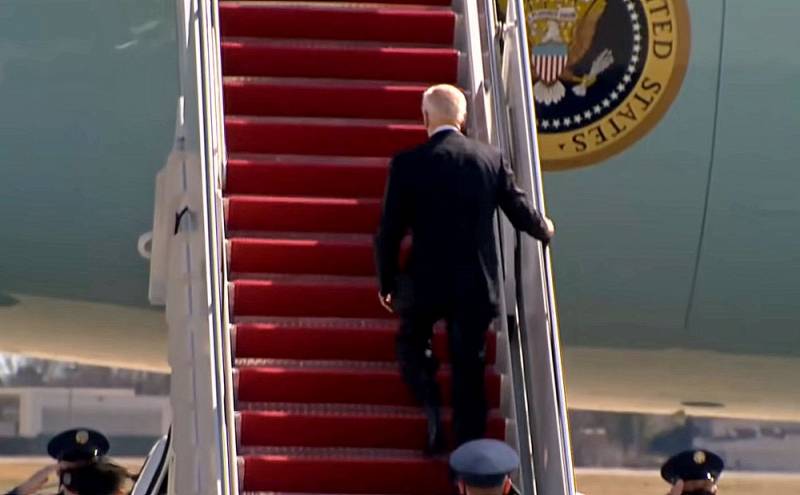 On May 21, the United States imposed sanctions on Russian ships and companies associated with the construction of the Nord Stream 2 gas pipeline. The next sanctions package was adopted by the US Treasury Department in an attempt to prevent the completion of the gas pipeline, which is already more than 90% ready.


American sanctions are reaching a qualitatively new level. At first, these were entire sectors economics RF. Then some companies from Russia. Then Russian individuals. Today, the sanctions are already being introduced against the courts. Apparently, the next step will be the imposition of sanctions on cars with Russian numbers, as well as motorcycles, scooters and bicycles. What if the latter are also somehow involved in the construction of the gas pipeline? In addition, if you think about it, then the crew members of the ships must somehow get to them? And these are planes, trains, regular buses ... And you can also impose sanctions on them!

In general, the current American foreign policy somewhat resembles the behavior of a clinical schizophrenic. In February, Biden promises not to give up in the face of "Russian aggression."

We will not hesitate to make Russia pay and we will defend the vital interests of our people
- he declares during a speech at the US State Department.

Further more. In March, Biden directly offends the Russian head of state by affirmatively answering the question of whether he considers Vladimir Putin a "killer" - something to which American leaders did not stoop even at the height of the Cold War.

Nevertheless, on April 13, Biden calls Putin, discussing a number of regional and global issues, including issues of strategic stability, climate change and arms control. Biden also talks about the desire to build "stable and predictable relations with Russia."

Indeed, on April 15, Biden confidently declares that the United States is ready to normalize relations with Russia.

Now is the time to start de-escalation. We must move forward through thoughtful dialogue and diplomatic process. The United States is ready to continue to move forward constructively in this process
- emphasizes Biden, speaking at the White House.

At the same time, he announces the expulsion of ten Russian diplomats, the introduction of new sanctions against more than 30 enterprises and individuals from the Russian Federation, and a ban on American companies from performing operations with Russian government debt bonds. This is not the beginning of the normalization of relations, is it?

April is replaced by May. The phases of the moon change, and in the inner world of Joe Biden, the unity and struggle of opposites continues. The American president categorically connects the attack on the American Colonial Pipeline with hackers operating from the territory of the Russian Federation, however, having immediately corrected himself that there is no evidence that Russia is involved in this. There is no evidence, but there is still a desire to once again point to Russia. In a world where proxies and vpn are ubiquitous by ordinary users, talking about hackers belonging to a certain country simply by their ip-addresses looks like an inept attempt to shift all the blame for their own failures in the field of security onto someone else. After all, if the American special services had real evidence of the involvement of Russian hackers in this, would they not have made it public?

But you can't just take and explain to an ordinary American voter why there are problems with gasoline on the East Coast. To put it as it is: yes, we have the largest defense budget in the world, but our key infrastructure facilities are being hacked by unknown persons whom we are unable not only to find, but even to identify, is too cruel in relation to American power feelings. It is much easier to tell everyone from a high rostrum that the almighty Russian hackers are again to blame for everything, “electing US presidents” and “carrying out” by hacking the mail, the largest invasion of Hillary Clinton's private life since Monica Lewinsky's acquaintance with her husband Bill. It’s even strange how in the pre-computer era, American politicians did without such a convenient explanation of all their problems.

Indeed, in fact, the vaunted US National Security Agency failed not only to prevent the attack, but also to cope with its consequences, as a result of which the pipeline operator had to pay a multimillion-dollar ransom to an unknown hacker group just to resume work. At the same time, Biden tactfully refused to comment on the questions about the payment. After all, declaring the sources of an attack without providing evidence is one thing, but coping with its consequences is quite another. Only White House press secretary Psaki dryly recalled the undoubtedly principled position of the United States not to pay extortionists.

Obviously, the situation with the American pipeline reminded Biden that Russia also has a pipeline, the construction of which would not hurt to create more obstacles. Such as, for example, the new sanctions package adopted on May 21. Of course, no one spoke directly about the implementation of the "tit for tat" principle, but given the timing of the announcement of new sanctions, it is clear that they are intended to demonstrate the decisiveness of the American leadership's actions in "countering the Russian threat", even to hacking the Colonial Pipeline »Russia has nothing to do. Biden seems to have once again forgotten that the United States was supposedly going to mend relations, as well as whether he was seeking dialogue or confrontation. Or he has not forgotten, but simply does not know himself. The chaotic foreign policy throwing of the United States no longer smells like a cunning game, but serious oddities that cause bewilderment even among experienced politicians.

As the press secretary of the President of the Russian Federation Dmitry Peskov noted in an interview with Interfax, the Kremlin would like to understand the actions of the United States, which "say one thing, do another." Of course, this principle is in service with the overwhelming majority of world politicians, but the way Biden uses it is already beyond any boundaries. As a result, the future of Russian-American relations defies planning even in the short term, and it is likely that the reason for this lies in the personal qualities of Biden himself.

American foreign policy at all times has been a kind of reflection of the personality of its president. Joe Biden, 78, who visited the USSR during the Brezhnev era, has clearly passed his peak as an acting politician. Confusing interviews, problems with diction and logic, as well as contradictory statements that go beyond reason - all this together form a certain picture that looks quite unambiguous even to an outside observer. Nevertheless, the office of the President of the United States is clearly not one of those that veterans of political struggle hold as an honorary pension. Biden just happened to be in the right place at the right time, becoming a political warhead aimed at achieving the sole goal of snatching election victory from Donald Trump. The younger and more energetic politician, apparently, was not suitable for this. It is not known whether the political strategists of the Democratic Party were afraid that the vacillating representatives of the older generation would give their voice to a more experienced politician or something else, but in any case, Biden nevertheless went to the Democratic primaries and won. As well as the subsequent presidential elections, despite an unprecedented number of violations and cases of fraud in the counting of votes noted by a number of experts.

But less than a year ago, the United States pursued a much more consistent policy towards Russia. Yes, there were sanctions, yes, there were far-fetched accusations of interference in the elections and serious tension, but at least there was at least some sense of stability, no matter how absurd it may sound, given Donald Trump's outrageous management style.

Anything can be expected from the Biden administration, apparently. And here it is important to understand how fundamental differences lie between these two politicians. Trump is a business shark, accustomed to always getting his way, a tough but effective manager who, not being a career politician, practically took the top of the US political Olympus by storm. Biden, on the other hand, is the flesh of the American establishment, the tip of the iceberg of the Deep State, whose professional qualities played rather a secondary role during the Democratic nomination. And if Trump, as an entrepreneur, tried to think outside the box and see opportunities everywhere, then Biden seems to be absolutely satisfied with the role of a blind guide to the aspirations and interests of the American bureaucracy.

After all, as the chairman of the commission on information policy of the Federation Council of the Russian Federation Alexei Pushkov noted, "Biden dreams of Russia in the 90s, that is, of a dependent and obsequious Russia." So we can only guess how he feels, seeing how Russia is gradually restoring its positions in the international arena.

Biden's political career was forged during the Cold War era, which could not but leave an imprint on his personality. And even if, somewhere due to age or physical form, “sleepy Joe” loses its “thread”, there is no doubt that he still remembers the key direction: to oppose Moscow at any cost. And the show of political unpredictability, which many thought would end with the rule of Donald Trump, is only gaining momentum through Biden's efforts.
Ctrl Enter
Noticed oshЫbku Highlight text and press. Ctrl + Enter
Reporterin Yandex News
Reporterin Yandex Zen
3 comments
Information
Dear reader, to leave comments on the publication, you must sign in.