What Biden has to offer in a personal meeting with Putin 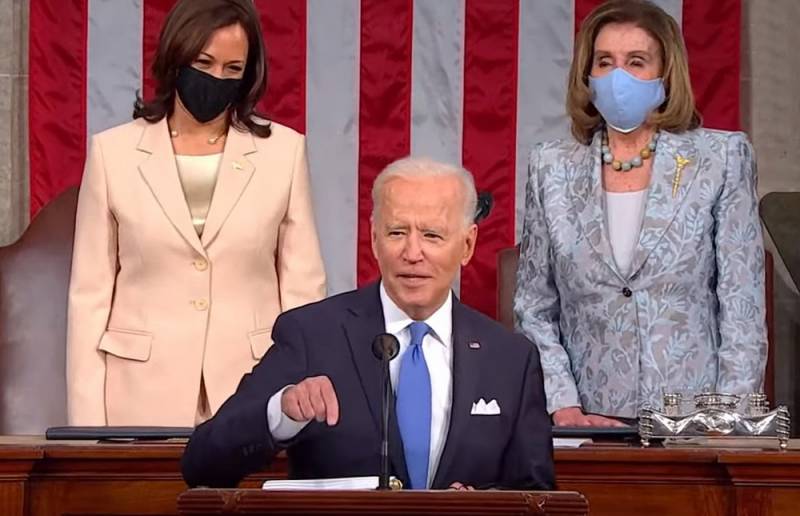 The day before in the Icelandic capital, a meeting of the heads of the foreign affairs agencies of Russia and the United States took place. Sergei Lavrov and his American counterpart Anthony Blinken calmly discussed a wide range of issues. After that, the US Secretary of State announced that a meeting between President Joe Biden and the "killer" Vladimir Putin could take place in the very near future. After a series of anti-Russian steps on the part of Washington, such a constructive approach in the domestic press was considered almost a "surrender" of the White House. But is this really so, and what can be expected from the upcoming meeting of the presidents of the two leading nuclear powers?


First, let's see what many Russian political scientists and journalists saw as the surrender of positions on the part of the United States to the Kremlin. Joe Biden's administration allegedly refused to impose sanctions against the Nord Stream operator Nord Stream AG and its head. Ostensibly because this interpretation of events does not correspond to reality. In fact, the United States imposed sanctions with the following wording:

The State Department has submitted a report to Congress on amendments to the PEESA law, identifying four vessels, five organizations and one person that are involved in the construction of the Nord Stream 2 pipeline, including Nord Stream 2 AG and the head of the company Matthias Warnig. The individuals identified in the report are subject to sanctions.
However, in relation to Nord Stream 2 AG, its head Matthias Warnig and corporate employees of Nord Stream 2 AG, the sanctions were immediately suspended. Note, not canceled, but suspended, which indicates the temporary nature of these restrictions. And with regard to four Russian vessels and four organizations that participated in the construction of the gas pipeline, no exceptions were made, that is, sanctions will be introduced and will continue to operate. At the same time, Washington directly stated that they would continue to hinder the implementation of this energy project. With a great desire, of course, you can interpret this all as our unheard-of victory, but let's refrain from such assessments for now.

Now, on the merits of the past meeting. As US State Department spokesman Ned Price explained, Sergei Lavrov and Anthony Blinken discussed a wide range of issues:

The Secretary of State stressed the need to ensure humanitarian access for the people of Syria, they also discussed regional issues, including the search for a long-term political solution to the conflict between Armenia and Azerbaijan.
The heads of the Russian and American foreign affairs agencies touched upon those issues where both sides have "points of contact."

At first, this is an unhealthy situation with the work of diplomatic missions in both countries. This issue became a problem under Barack Obama, worsened during the 4-year presidency of Donald Trump and reached its maximum acuteness under Joe Biden. For its part, the RF Ministry of Foreign Affairs proposed “options for a solution”, up to zeroing to the state of 15 years ago. Now the ball is on the side of the White House.

Secondly, the key issue in relations between the two strongest nuclear powers in the world has been and remains strategic security. According to Foreign Minister Sergei Lavrov, he saw the opponent's readiness to conduct a dialogue on all factors affecting international stability.

Thirdly, Lavrov and Blinken paid attention to numerous regional problems and armed conflicts. It turned out that the positions of both sides coincide on the settlement of the Korean Peninsula, in Afghanistan and on the Iranian nuclear issue. At the same time, the Russian minister drew attention to the undesirability of the deployment of the American military in Poland, which negatively affects the defense capability of the Russian Federation.

What conclusions can we draw from this meeting? As a matter of fact, we did not hear anything fundamentally new. The State Department broadcasts the position of Joe Biden, from which he went to the presidential elections from the very beginning: to use Russia where it is beneficial to the United States, and to continue to put pressure on where the Americans consider it necessary. The most interesting thing is what "Sleepy Joe" wants to achieve from the "killer" in person. And there are not so many options. Immediately come to mind: the situation in the East of Ukraine, the frozen Nord Stream 2, which the United States promised to press further, and the already slightly forgotten opposition leader Aleksey Navalny, languishing in the dungeons of the GULAG. It can be assumed that the United States will offer the Kremlin some kind of deal: a "settlement" of the issue with the DPR and LPR in exchange for the possibility of completing and launching the problem gas pipeline. For its part, Gazprom undertakes to maintain the transit of certain volumes of gas through the Ukrainian GTS even after 2024, and the work of Nord Stream 2 will be directly linked to the world in the East of Independent. The maximum program for Joe Biden would be the release from prison of Alexei Navalny, who will then turn into Khodorkovsky-2.

Needless to say, it's not worth it to go towards such proposals, if they really sound? In the end, nothing good comes out of "friendship" with the Americans.
Ctrl Enter
Noticed oshЫbku Highlight text and press. Ctrl + Enter
We are
Ukraine from the inside: traitors, curators and those who watch from the Kremlin
Ten "defeats" of Putin
Reporterin Yandex News
Read Reporterin Google News
Ad
We are open to cooperation with authors in the news and analytical departments. A prerequisite is the ability to quickly analyze the text and check the facts, to write concisely and interestingly on political and economic topics. We offer flexible working hours and regular payments. Please send your responses with examples of work to [email protected]
12 comments
Information
Dear reader, to leave comments on the publication, you must sign in.