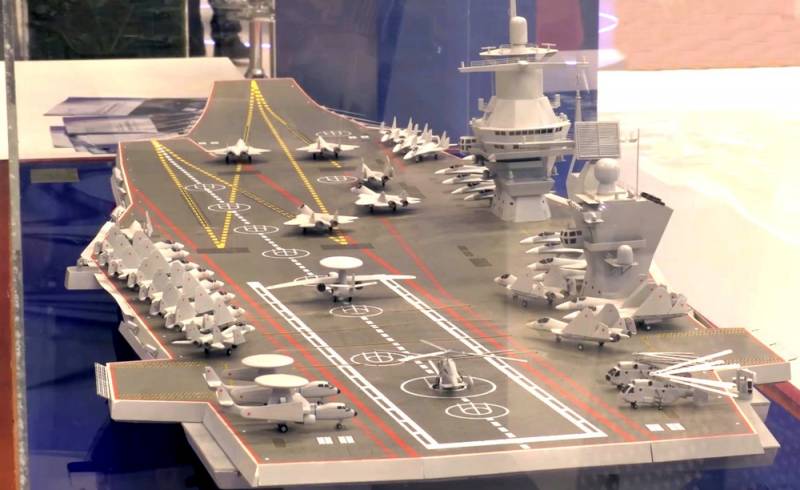 And again about aircraft carriers. The Military-Industrial Commission of the Russian Federation is considering the possibility of building the first full-fledged domestic aircraft carrier, presumably with a nuclear power plant. The budget of the project at the start is impressive: some 500 billion rubles and the same amount for the construction of the infrastructure necessary for its operation (in the future, the amount may increase, as is often the case). Trillion rubles in one single ship - is it worth the candle?


For an adequate answer to this question, it is necessary to decide, why does our country need an aircraft carrier at all, what specific tasks will it perform? On this occasion, two irreconcilable camps have long been formed. The former believe that Russia is a great land power, and it needs to focus on ensuring security from its neighbors, while at sea we cannot compete with the United States in principle. The latter are convinced that, having closed itself on the continent and lacking effective levers of influence and "projection of power" in the World Ocean, Russia voluntarily abandons even attempts to become a global geopolitical player. There is a lot of truth in both points of view.

On the one hand, Russia currently does not have free production facilities and experienced specialists capable of implementing such a complex project. It will be difficult for the existing industrial base to provide a single aircraft carrier with all the necessary equipment nomenclature. There is no deck-based AWACS aircraft and tanker aircraft necessary for the functioning of the AUG. To form an aircraft carrier strike group, it will be necessary to collect from the pine forest a few scarce first rank ships, thereby weakening the rest of our fleets. It is unclear where the first full-fledged Russian AUG will be based. If in the Pacific Ocean, then it will have to build the corresponding expensive infrastructure.

And what specific tasks will it perform? If you just show the flag, then it will be expensive pleasure. Work on the communications of a potential enemy? But the US Navy has 11 carrier strike groups, and you can't impress them with just one. Finally, where to get money for all this? Our military budget is incomparable with the American budget and is constantly being sequestered. If you throw a trillion "with a tail" on an aircraft carrier, which will be built for many years to come, then other equally important weapons programs will receive less funding.

On the other hand, the Russian fleet still needs aircraft-carrying ships. Frigates and corvettes alone cannot defend even our own maritime borders. The multipurpose nuclear submarines of the United States and the NATO bloc pose a great danger to these ships, which have very little autonomy and relatively weak armament. Each Russian navy needs its own aircraft carrier, whose helicopters and aircraft will provide their anti-submarine protection and air defense. I would like to ask those who are in the camp of the opponents of aircraft carriers, what are we going to do if, for example, Japan takes the Kuril Islands into a naval blockade? How are we going to release and recapture our islands? Recall that the Self-Defense Forces of the Land of the Rising Sun are currently converting both of their helicopter carriers into aircraft carriers.

The trillion invested in the construction of the aircraft carrier will not go to the American Treasuries, but will remain in the country and will be invested in the development of its own industry and the production of the latest weapons and high-tech equipment. The lack of shipyards capable of building a ship of this class is an excellent reason to create appropriate production facilities.

It turns out that both points of view have their own rational kernel, but the truth, apparently, will be somewhere in between. Does Russia need aircraft carriers or not? Needed. The only question is which ones, for which specific tasks and when. For this reason, this issue cannot be considered separately from the general condition of the domestic combat fleet.

At firstGiven the weakness of the surface component, it is necessary to maintain and develop our submarine forces, nuclear submarines equipped with cruise missiles and ICBMs, to deter a potential enemy. So far, this is a priority.

Secondly, in parallel, you need to actively develop your surface fleet, equipping it with "Caliber", "Onyx" and "Zircon". To complete the series of Project 22350 frigates of the "Admiral Gorshkov" type and its modification 22350M with an increased displacement. After that, think about the production of missile destroyers and cruisers. The combat stability of the renewed Russian fleet should be increased by the Project 23900 universal landing ships of the Ivan Rogov type currently being built in Kerch. These two UDCs are a response to the French Mistrals and are essentially light aircraft carriers.

In addition to transporting and disembarking amphibious assault forces, they carry on board up to 16 Ka-27, Ka-29, Ka-31 or Ka-52K helicopters, and up to 4 UAVs. After putting them into operation, our Navy will be able to quickly carry out the transfer of troops to separate theaters of military operations, which will increase its effectiveness. The Syrian campaign has clearly demonstrated that the Russian Defense Ministry is in dire need of new large amphibious assault ships, which serve as real "workhorses" of logistics in such local conflicts. In the future, Russia should have its own vertical take-off and landing aircraft (VTOL), which should be our answer to the American F-35B. The presence of an air wing on the deck of each UDC sharply increases the stability of the entire flotilla in which it goes. It turns out that the decision to build two new large UDCs was a very correct step towards the creation of aircraft-carrying ships.

Thirdly, after Russia has its own VTOL aircraft, the Ministry of Defense of the Russian Federation can take the next step by starting the construction of aircraft carriers, but not heavy nuclear ones, like the American ones, but lighter and more inexpensive ones. Currently, many countries are in the process of creating and re-equipping light aircraft-carrying ships. It is noteworthy that this idea originated in the United States under the name Sea Control Ship (SCS). Due to its compact size and conventional power plant, such a ship should have cost 8 times less than the Nimitz. On board such a light aircraft carrier, it was supposed to place anti-submarine helicopters and VTOL fighters. The main task of the Sea Control Ship is to provide continuous air cover for convoys. Due to the sequestration of the military budget, the Pentagon abandoned this idea, but it was picked up and implemented in other countries, for example, in Spain.

Probably, this is what the modern small Russian fleet needs to increase its combat effectiveness, especially if shock and reconnaissance and strike UAVs are placed on such an aircraft carrier. Of course, they cannot directly compete with the AUG of the US Navy, but this is not the task of light aircraft carriers. But the construction of several such compact and relatively inexpensive aircraft-carrying ships will be within the capabilities of our shipbuilding industry and within the pocket of the military budget. And after that, when we step by step go through all the stages of restoring our surface fleet and industry in general, we can seriously think about a full-fledged aircraft carrier with an attached strike group (new destroyers and cruisers), which will not ruin the country, but, on the contrary, strengthen.
Reporterin Yandex News
Reporterin Yandex Zen
28 comments
Information
Dear reader, to leave comments on the publication, you must sign in.