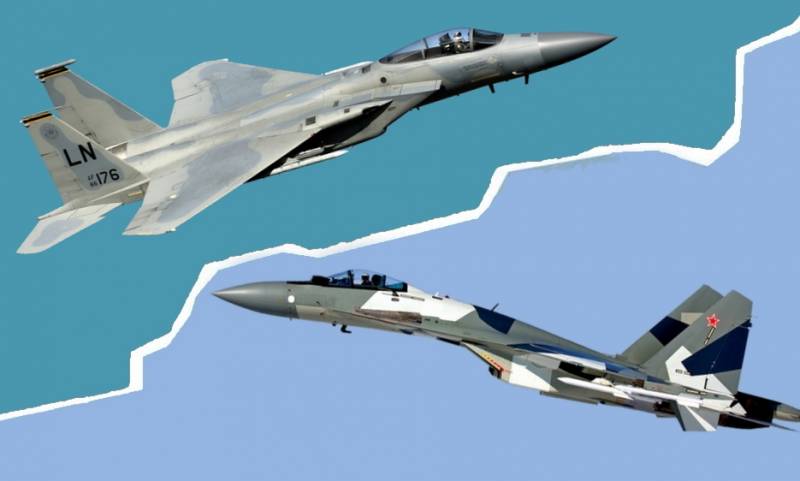 The Indian Air Force has announced a tender for the purchase of a heavy fighter. Russia and the United States have traditionally become the main competitors in the struggle for a lucrative contract. However, already now some experts are "predicting" a victory for our Su-35 over the American F-15EX, since the latter allegedly does not meet modern challenges and does not provide a solid defense.


Based on the technical characteristics, the "American" is a little faster and more versatile, and our aircraft is noticeably more maneuverable and modern. But how are things really?

The F-15EX is capable of a maximum speed of Mach 2,5, while the Su-35S is capable of Mach 2,25. At the same time, the Russian fighter is 35% more maneuverable than its foreign competitor.

In terms of armament, the F-15EX takes in quantity (22 missiles versus 14), but inferior in quality. The maximum range of the American AIM-120D missiles is 180 km, while our R-37s will reach a target at a distance of 400 km.

But the main advantage of the Russian combat aircraft is its onboard electronics. The latest American phased array radar is capable of seeing a target at a distance of 145 km within plus or minus 60 degrees in azimuth, and our Irbis-E radar will detect the "enemy" at a distance of 300 km at plus or minus 120 degrees along the course and 145 km within plus or minus 270 degrees. The S-35 is also better in terms of target designation: 8 targets versus 6 for the F-15EX.

In general, our fighter outperforms its American competitor in most parameters. At the same time, the Su-35 is almost half the price of the F-15EX. However, the Indians still have to choose, so it is difficult to say who will win this tender.

Ctrl Enter
Noticed oshЫbku Highlight text and press. Ctrl + Enter
We are
Russia revived the production of Strela and made it much more powerful
Old planes for expensive: why the US Air Force decided to buy almost 150 F-15EX
Reporterin Yandex News
Read Reporterin Google News
Ad
We are open to cooperation with authors in the news and analytical departments. A prerequisite is the ability to quickly analyze the text and check the facts, to write concisely and interestingly on political and economic topics. We offer flexible working hours and regular payments. Please send your responses with examples of work to [email protected]
6 comments
Information
Dear reader, to leave comments on the publication, you must sign in.