China started military expansion in different regions of the planet 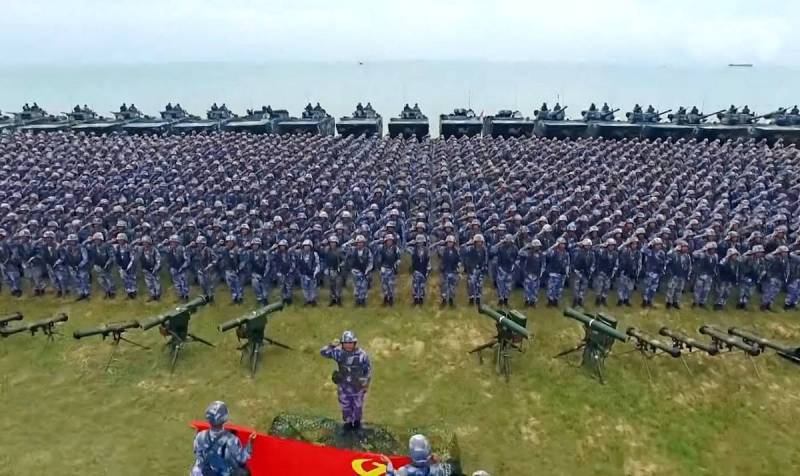 The Chinese military presence in other countries has long been a sore point for Pentagon strategists and analysts. Contrary to popular belief, the People's Republic of China, which has a huge zone of political and economic influence, has practically no military bases.


The People's Liberation Army of China maintains an active military presence in a number of regions of the world, but it is sometimes represented by extremely modest forces - in this case there is no talk of any strategic military installations. The Chinese armed forces, for example, in Africa, are mostly represented by a few specialist UAV operators, military instructors and special operations forces.

However, it would be naive and extremely shortsighted to believe that this situation will not change in any way.

As the processes contribute to the expansion of China's sphere of influence and its expansion beyond its national borders, the republic's leadership increasingly declares that the PLA must ensure the protection of Chinese interests abroad. The prerequisites for this were long ago - back in 2004, a member of the Chinese Communist Party, Hu Jintao, announced for the first time that the army should take on "new historical missions."

Subsequently, China launched the Belt and Road Global Infrastructure Initiative. A project of this magnitude was reflected in a change in rhetoric in the discussions of Chinese political circles pondering over the question of what the best way could be to secure the growing investments of the republic in other parts of the world.

When Xi Jinping took office, the discussion about the need for foreign military bases changed radically.

Since at least 2019, in official documents and statements of the Ministry of Defense of the PRC, the military began to directly set the task of protecting the interests and investments of the People's Republic of China abroad, which openly declares that the PLA will develop "overseas logistics facilities."

China established its first official overseas military base in Djibouti. This happened in August 2017 - it is known that only at the initial stage of construction, Beijing spent approximately $ 590 million. This facility is under the jurisdiction of the PLA Navy: its central task is, firstly, to provide logistical support to Chinese forces in the Gulf of Aden and the Red Sea, and secondly, to support peacekeeping, humanitarian and rescue operations in Africa.

The base is home to about 2000 PLA ​​troops, including hundreds of Marines who provide security for the facility. It is known that armored vehicles and light means of fire support are already based there - and combat helicopters and drones are expected soon.

Of course, since China established a naval base in East African Djibouti, analysts, strategists and simply inquisitive researchers have been trying to predict exactly where the republic's next overseas logistics facility will be built.

A 2020 special report by US military analysts lists a long list of countries that could become potential candidates for an expanded Chinese presence. The study says the People's Republic of China may consider states such as Myanmar, Thailand, Singapore, Indonesia, Pakistan, Sri Lanka, United Arab Emirates, Kenya, Seychelles, Tanzania, Angola, and even Tajikistan as locations for strategic strongholds. points of the PLA. According to the Americans, Beijing has already tried to create military installations in Namibia, Vanuatu and the Solomon Islands, and is also active in Cambodia.

China is looking for a place where it can replenish supplies and repair its warships. This will become a military advantage in the event of a potential conflict.
- said the head of the African Command (AFRICOM) USA Stephen Townsend.

However, the list does not stop there - in 2021, diplomatic contacts of the Chinese political leadership with countries such as Angola and South Africa were recorded. This seriously alarmed both the American military, including those of the highest rank, like the aforementioned AFRICOM General Stephen Townsend, as well as Admiral Craig Fuller (head of the US Southern Command) and General Frank Mackenzie (head of the US Central Command).

The highest military circles of the United States and allied European countries, acting as members of the anti-Chinese bloc, believe that the active growth of Chinese expansion is taking place not only in Asia and the Pacific Ocean. In turn, a galaxy of analysts argue that Beijing is aggressively promoting its economic influence in the states of Africa, South America and the Middle East, actively looking for places there for the deployment of military facilities.

Especially strongly Western strategists fear the construction of military facilities of the PRC not on the east coast of Africa, but on the west. This will put them face to face with the prospect of confronting the Chinese naval forces not only in the Pacific, but also in the Atlantic. Moreover, West Africa is geographically less distant from North America, which threatens the American east coast.

All this is by no means empty assumptions - China has numerous economic interests on the west coast of Africa (especially fishing and oil production). Moreover, Beijing has also invested in and participated in the construction of a large commercial port in Cameroon, the infrastructure of which may well serve as a launching pad for a naval base or logistics center.

In any case, it is clear that Beijing's presence will only grow. Such measures will not only improve China's image in the international arena, but will also allow the PRC to further strengthen its influence in the world.
Ctrl Enter
Noticed oshЫbku Highlight text and press. Ctrl + Enter
We are
"We must beat first": the geopolitical alignment around Russia is continuously deteriorating
Ten "defeats" of Putin
Reporterin Yandex News
Read Reporterin Google News
9 comments
Information
Dear reader, to leave comments on the publication, you must sign in.