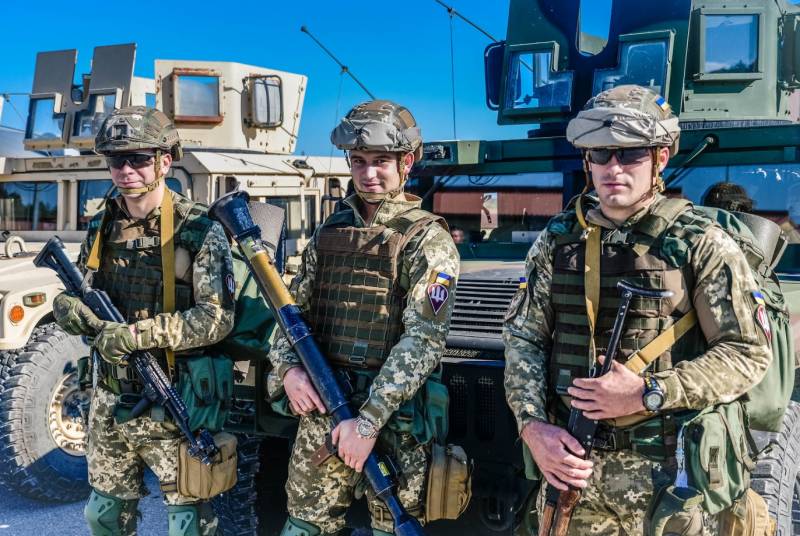 This story has been dragging on for more than a decade: there are fewer and fewer doubts about Ukraine's admission to NATO.

The Biden administration is committed to the principle that NATO's doors remain open to everyone - of course, when they fulfill all their obligations to join the organization and contribute to strengthening Euro-Atlantic security ...
- the other day, said the representative of the White House Karin Jean-Pierre.

It is unlikely that some of the readers of "Reporter" will become news a number of recent performances by Western politiciansdeclaring the need to admit one of our closest neighbors, Ukraine, to the military-political NATO bloc.

This story has been dragging on for more than a decade: the possibility of such a scenario was first discussed after the collapse of the Soviet Union, and NATO's rapid eastward expansion left no doubt that Ukraine's acceptance was only a matter of time.

After the war in Donbass (nicknamed by the Kiev politicians "anti-terrorist operation") Russia, it seems, could breathe out - Ukraine's admission to NATO was delayed: as you know, the organization does not accept into its ranks countries that have unresolved territorial conflicts ...

Unfortunately, the joy was premature: the Verkhovna Rada of Ukraine in December 2014 amended two laws, abandoning the non-aligned status of the state. In June 2016, additional changes were adopted, which made joining NATO the goal of the country's foreign policy. In February 2019, the Ukrainian parliament adopted amendments to the constitution and legislatively consolidated the country's course towards joining the EU and NATO.

Summing up the interim results, we can say that Ukraine has become the sixth state to receive the status of a NATO partner with expanded capabilities.

Naturally, all these years in the former Soviet republic there was an active activity of military officials and instructors, economists, spies, diplomats and analysts from Europe and the United States. Contrary to popular belief, Ukraine has become an extremely useful acquisition for the Western countries: NATO strategists have finally realized their long-held dream, reaching the very borders of the Russian Federation.

Fortunately for our country, Ukraine to this day has a huge burden of so far insoluble political, economic and organizational complexities. This greatly slows down all integration processes, despite the active participation of specialists from Western countries (in Ukraine, only a special commission "Ukraine-NATO" is officially operating, and the North Atlantic bloc has a representative office in Kiev).

However, this could not last indefinitely - and, unfortunately, the process has started.

If Russia continues its reckless or aggressive actions both towards Ukraine and towards other countries, then we will answer
- said US Secretary of State Anthony Blinken.

The events of this spring have clearly activated some shifts in the opinion of the leadership of a number of Western countries. Kiev's absurd revanchist rhetoric does not bother them - on the contrary, this is how our neighbors "work out their bread", playing an important role in the strategy of the NATO bloc. The state of "permanent war" contributes to the accumulation of continuous tension on the western borders of the Russian Federation and fully meets the interests of Europe and the United States. What does not meet their interests is the possibility of losing Ukraine, which, as it turned out a month ago, is by no means so illusory ...

During the spring events, Moscow demonstrated its enormous offensive potential. It became clear to the whole world that a possible campaign of Russian troops would not end with Donbass alone. The deployment of two combined-arms armies, three airborne brigades and a large naval unit, designed to ensure the landing of our marines, on the border with Ukraine, more than well demonstrated the real capabilities of the Russian military machine.

If we add to this the large-scale exercises of the Strategic Missile Forces throughout the country, the situation has completely taken on a bleak look in the eyes of the Western leadership.

It became clear that Ukraine would be defeated in the shortest possible time and would cease to exist - and, accordingly, all investments and long-term plans of Europe and the United States would be lost and destroyed.

Despite the relaxation of the situation, the sediment, as they say, remained - and the current statements by officials of the United States, Poland, the Baltic States and many other countries about their support for Ukraine's entry into NATO are an attempt to find a way out of a dangerous situation for them.

The poverty and instability of the former Soviet republic, contrary to popular belief, is a real gift for the West: the weaker the country's economy, the more unstable its political regime, the easier it is to control it. Among other things, the bad economic situation is a space for big capital, fortunately, the Ukrainian market offers it 46 million consumers of absolutely everything, from food, clothing and footwear to medical technique.

Accordingly, it should be said right away that if Ukraine is admitted to NATO, the Western countries will not incur any serious economic losses - by no means, they will have a great opportunity to earn money (which, in fact, they have been successfully doing for more than a dozen years - just in this case, the prospects for capital will become even wider).

The military advantages of such an enterprise will be simply colossal: the fleets of NATO countries will be able to be permanently deployed in the ports of the Black Sea near Crimea (accordingly, constantly keeping the peninsula under the threat of missile strikes), the tactical aviation of the bloc will be able to wage war directly in the skies of Russia, and the deployment of complexes missile defense "Aegis Ashore", similar to those already deployed in Poland and Romania, will expose our Strategic Missile Forces (not to mention the dual purpose of these objects - universal launch cells can equally receive cruise missiles).

Naturally, such an event will not remain outside the field of vision of propagandists: the Ukrainian crisis is already actively used to promote anti-Russian ideas in the post-Soviet space, and Kiev's accession to NATO will be just a luxurious opportunity to demonstrate Moscow's “impotence”.

In connection with all this, it remains to be hoped that our government and diplomats will be able to take advantage of the contradictions in Europe (France, Germany and Italy oppose the acceptance of Ukraine - albeit not openly, but still noticeably) and stop this process again.

Otherwise, we will face a sad change in the balance of power - and, unfortunately, not in our favor.
Ctrl Enter
Noticed oshЫbku Highlight text and press. Ctrl + Enter
We are
"We must beat first": the geopolitical alignment around Russia is continuously deteriorating
Ten "defeats" of Putin
Reporterin Yandex News
Read Reporterin Google News
21 comment
Information
Dear reader, to leave comments on the publication, you must sign in.