Armor is not strong and tanks are not fast: how the Malyshev plant dies 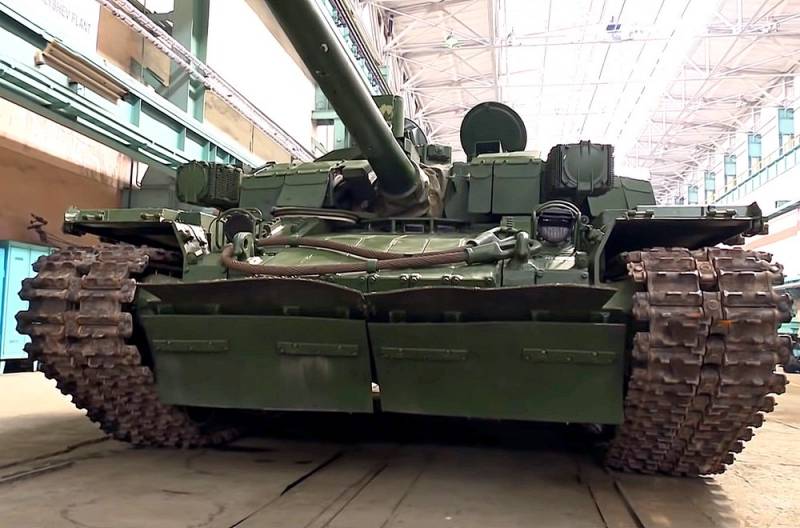 According to the official representatives of Ukraine, this country has been living in a state of war since 2014. Moreover - "aggression", about which Kiev incessantly shouts for any possible reason, and generally without it. It would seem that in such a situation the military-industrial complex of the state, which has been forced to “reflect” and “resist” for many years now, would have to be in a state of simply unprecedented prosperity, albeit at the cost of implementing the not very attractive formula “guns instead of butter” ...


However, in the existing “non-profit”, such an impression, in some fantastic “parallel reality”, everything happens exactly the opposite - the defense enterprises inherited from the Soviet Union are now completely destroyed, or they are falling apart, as they say, before our eyes. How and why this happens is perfectly illustrated by the example of the Malyshev Kharkov Tank Plant.

From steam locomotives to the "tank smithy"

Generally speaking, it would not be entirely correct to call the Kharkov plant, which we will discuss below, Soviet legacy. Much to the chagrin of Ukrainian "patriots", we recall that it was founded at the end of the 1897th century by the Russian Steam Locomotive and Mechanical Joint Stock Company. Yes, yes - and here the "klyat Muscovites" tried ... Actually, the enterprise that produced the first finished products at the end of XNUMX was called the Kharkov steam locomotive plant. However, it began to work for the defense industry very soon, having mastered the production of artillery pieces and shells for them - the Empire entered a series of wars and these products were more than in demand.

During the Civil War, the first tanks were also in the workshops of the plant - naturally, foreign ones, captured on the battlefield as trophies and driven there for repairs and bringing them into a combat-ready state. The establishment of Soviet power in the country very quickly determined the two main areas of specialization of the plant: locomotives, this, of course, is good (diesel locomotives continued to be produced there until the end of the twentieth century), but at that stage something else came to the fore. For the mechanization of agriculture, which was going through a period of collectivization, tractors were needed. And for the Red Army, which was strenuously preparing for the inevitable new battles - tanks, armored vehicles, tractors and other technique... It is precisely its manufacture that becomes the main occupation of "machine-building plants No. 183 and No. 75", from the shops of which practically all Soviet tanks came out, with an emphasis on medium and light vehicles. The best tank of the Great Patriotic War, the unsurpassed T-34, was developed by Mikhail Koshkin in the design bureau of the Kharkov plant, and in 1940 its serial production began on it.

Naturally, during the Nazi occupation of Kharkov, the enterprise was evacuated to the Urals, but as soon as the invaders were kicked out, work began again in its workshops under the slogan: "Everything for the front, everything for Victory!" The assignment to the plant of the name of the legendary Stalinist People's Commissar of Heavy Engineering, Colonel General of the Engineering Service Vyacheslav Malyshev, was a significant recognition of the merits of the collective of this enterprise in the implementation of what this outstanding statesman devoted his life to - the creation of the indestructible armored power of the USSR, first to the fluff and the ashes of the devastating hordes of the Wehrmacht and its allies, and then instilling irresistible fear into the NATO fighter. The Kharkov tank produced formidable combat vehicles, up to the T-80U. And by the way, they are not alone.

The famous Antarctic all-terrain vehicles that conquered the South Pole were called "Kharkovchanki" for a reason - they were developed and created at this very enterprise. Can we say that the history of the Malyshev plant ends with the collapse of the Soviet Union? Yes and no. What has definitely ended is a period of success and development. In the "nezalezhnoy" Kharkiv "forge of armor", like many other enterprises of the military-industrial complex - the factories "Arsenal", named after Artyom, "Antonov", "Yuzhmash" and many others, a completely different fate awaited ... Perhaps one of the main reasons the collapse of the Ukrainian military-industrial complex was the circumstance that during the division of Soviet military property this country got huge, completely disproportionate amounts of weapons and military equipment? “Why produce what is in warehouses, parks and other storage places and so in bulk ?!” - this is how the first Ukrainian rulers "thought", who initiated the total plundering of the country and the destruction of its industrial and scientific potential.

From industrial giant to ruins

In the first years of "gaining independence" a real orgy in the spirit of "wild capitalism" was taking place in Ukraine. State-owned enterprises deliberately went bankrupt in order to be "privatized" later, and, calling things by their proper names, stolen for a penny. In those cases when the "privatizers" did not manage to "devour" a particular industrial giant entirely, they began to "bite off" a piece of it. For sale were supposedly "unnecessary" production areas, objects of social, cultural and household purposes, housing stock, land plots. This cup did not pass and the Malyshev plant - its assets began to be gradually pulled apart. Their sale was motivated by the fact that during the Soviet era, the enterprise was designed to produce up to a thousand armored vehicles per year, and why so many tanks "peace-loving" and "multi-vector" Ukraine? The volume of production and the number of personnel of the enterprise decreased dozens of times, and the authorities were thinking with might and main about its complete "conversion" - re-profiling to create either seeders, or even carpets, or something else purely civil.

In fact, the plant was remembered only when, through the efforts of the camarilla of the first president of Ukraine, Leonid Kravchuk, during which weapons from the country were sold literally across the globe, the conservation storage facilities of the equipment were pretty devastated. Kiev has already got used to the quick and easy "weapon" millions and realized that the Malyshev plant is capable of providing first-class goods for their receipt. So, in 1996, the first export contract of the enterprise was concluded - with Pakistan for the supply of 320 T-80UD tanks. The deal was worth more than half a billion dollars, and it was fully completed by the end of 1999. At the same time, the Malyshevites mastered the production of a 120-mm tank gun according to NATO standards - Kiev's "tilt" to the West began to become more and more distinct. However, this did not help either.

The assets of the enterprise were being sold at full speed: a club, a clinic, a canteen, recreation centers, a number of workshops ... The list is long. In 2003, trying to correct the increasingly catastrophic situation at the Malyshev plant, the production of the Bulat tank, which is a "national" modernization of the T-64B machine, began. Widely advertised, this tank during the hostilities in the Donbass showed its complete failure and, according to the leadership of the Armed Forces of Ukraine, was because of this replaced on the front line with "conventional" T-64s. After the first Ukrainian "Maidan" the state of the enterprise deteriorated even more - it was no longer able to cover the obligatory payments to the budget and delayed the salaries of its own workers. A new attempt to "leave" at the expense of exports ended in failure - the contract for the supply of 420 armored personnel carriers to the Iraqi army, concluded in 2009, resulted in a terrible shame and a worldwide scandal. The deadlines for its implementation were shamelessly disrupted, the equipment was supplied with such a defect that the indignant Iranians simply returned some of the cars to the plant, for which they counted the Kharkiv residents with fines of $ 3 million.

The next deal, which promised Thailand 2011 Oplot supertanks in 49, almost did exactly the same. They did not meet the deadlines (deliveries were to be made before 2015), and the Asian partners already wanted to break the contract, but they managed to get out nevertheless. At about the same time, the plant's managers began to repeat about the "fantastic export potential of" Oplot ", which the states of Asia, Africa and Latin America are allegedly ready to purchase by almost dozens and hundreds. All this turned out to be another bluff - no new orders followed. For the Ukrainian army, which seems to have adopted the "Oplot" into service, it is too expensive and difficult to operate. It is better to "patch" the old, Soviet cars - in the hands of the Armed Forces of Ukraine, there is still no difference.

The hostilities in Donbass, it would seem, breathed new life into the Malyshev plant - the capacity utilization of the enterprise increased dramatically, so that for the first time in recent decades it even had to hire new workers. However, it was still not about the construction of new tanks, but only about bringing the Soviet vehicles taken out of storage and urgent repair of the scrap metal that came from the front line to a more or less efficient state. The current president of Ukraine, Volodymyr Zelensky, who appeared at the plant shortly after his own election, feigned indignation that only one new tank had come out of his workshops since 2009! I got angry and left ... And the enterprise was left to die. Despite the war (or, rather, precisely because of it), large-scale theft of equipment, materials and equipment worth millions of hryvnias, uncovered later, continued. Today, the Malyshev plant has a debt of almost 2 billion hryvnias (5.4 billion rubles) to the state. The company completed the year 2020 with a loss of 112 and a half million hryvnia (303 million rubles). It did not have orders for the manufacture of armored vehicles before, and does not have them now. The average salary at the enterprise is 10 thousand hryvnias (27 thousand rubles), which leads to a huge turnover of staff - people literally leave from there, especially in light of the fact that they have not been paid even this money for the past several months.

This month, the situation at the plant has reached such intensity that representatives of the Ukroboronprom concern, which the Malyshev plant has been part of for 10 years, had to meet with its staff. A lot was promised at this meeting - both the state order, and financial support and "development of the enterprise", and even "restoration of confidence in it from foreign partners" (I wonder how?), And other very positive prospects. However, the specific "anti-crisis plan" announced later by the current director of the plant Valery Krylas, as it turned out, comes down mainly to "repeating the past": "optimization of production areas and capacities" (that is - their sale), "optimization of production costs and personnel of the enterprise" (that is, dismissal of employees and reduction of payments), as well as the like. Moreover, in the same "Ukroboronprom" they vaguely hint at the forthcoming "corporatization", in which the employees of the Malyshev plant quite reasonably see the last step towards its final collapse and squandering.

Well, it is quite obvious that following the rocket and aircraft industry, Ukraine is about to lose its own tank building. On the one hand, this, in all honesty, is somehow calming. On the other hand, it causes resentment and pain for how in the “nezalezhnoy” once again the works and achievements of many generations were thrown into the wind.
Reporterin Yandex News
Reporterin Yandex Zen
18 comments
Information
Dear reader, to leave comments on the publication, you must sign in.