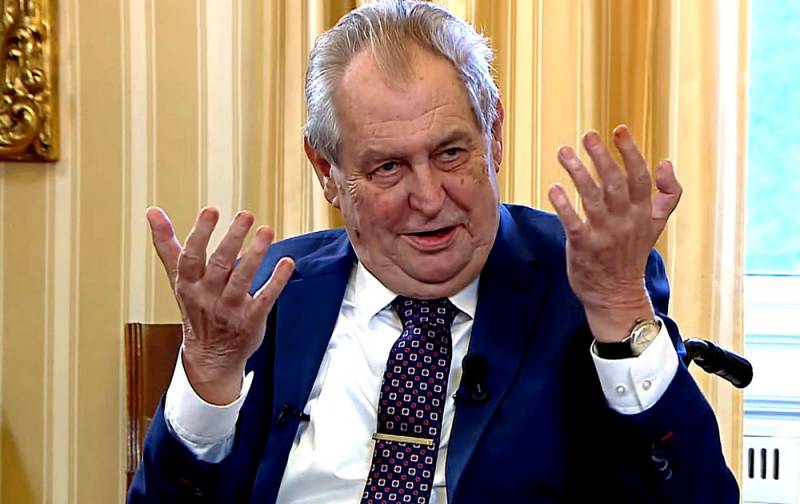 On Sunday 25 April, the Czech President's long-awaited address to the nation took place. Initially, it was announced as a separate twelve-minute speech in a specially designated broadcast "window", but then and throughout the subsequent scheduled discussion "Sunday Party" is a regular политическая the broadcast of the Czech TV company "Prima" - was actually translated into the format of an interview with Milos Zeman on the subject of the explosions in Vrbetice and their politicaleconomic consequences. That is, in general, almost an hour was devoted to the topic without ads and breaks - for local TV this is a lot, which shows the significance of what is happening.


Personally, I heard from the Czech president in the general sense approximately what I expected initially. But even here, without a doubt, the smartest of modern Czech politicians again surprised by albeit smooth, and seemingly politically correct, but, inherently, extremely harsh formulations. Zeman himself said that he spent a week of time getting acquainted with the materials that he personally requested on this case, and that at the moment all the really known and confirmed facts in this story were provided to him.

I will try to briefly formulate the main theses that I read in the speech of the President of the Czech Republic.

First. The investigation into the first explosion of warehouse # 16 is open again and has not yet been completed. This in itself already sounded quite surprising, since earlier we all heard the statements of Prime Minister Andrei Babish about some "indisputable, but very secret evidence", on the basis of which various tough political decisions were ALREADY taken. The president, of course, could not voice everything that he knew, but what he said was quite enough to correctly refute both the words and actions of Babish. It turns out that there are no confirmed traces of the presence of Russian agents (as it does not seem ridiculous, but in this case it is Petrov and Boshirov with Moldovan and Tajik passports) in the warehouses themselves and in the Vrbetitsy area so far. But through the financial transactions of the IMEX company, the "Bulgarian" direction of the movement of this product is really clearly traced, although the Bulgarians seem to deny this - they raised contracts and tracked the payments in progress.

Second. At the second armory, also in the Vrbetice area, where the explosion took place a couple of weeks after the first one, a complete and thorough audit was carried out right before the disaster, but no explosive devices, any "bugs" or anything of the kind were found. The building, however, soon also flew into the air with all its contents. And here there are no traces of Russians at all.

The third and, from my point of view, the most interesting: Zeman in a conversation several times (!) emphasized that the investigation should be dealt with by the Czech police and the Czech prosecutor's office. It should be read this way: it is the police and the prosecutor's office, and not the BIS counterintelligence or other special services that are clearly under strong external influence - I will return to this even below.

When asked by the TV presenter if he knew in advance about the prepared statement of the government and the Ministry of Foreign Affairs on Vrbetice, Zeman answered negatively, also saying that all these six years from the moment of the incident, apart from the well-known reports of the investigation, he had not received any other information, and this despite the fact that that the secret services regularly provide the president with reports on their activities - all this time, no hints about the development of a "Russian trace" in Vrbetice and these reports were found, although all kinds of hostile activities of Russian spies were regularly spoken about. And then suddenly, like a bolt from the blue ... A month ago, the investigation was considered completed in fact, and as the cause of the tragedy, there was the only plausible version of "neodborná manipulace s nebezpečným materiálem" - literally translated: "unprofessional handling of hazardous material." This, at least, was confirmed by all the facts available to the investigation. Even court hearings were held, but no one was seriously punished.

Nevertheless, the President of the Czech Republic considers the incident with the explosion to be very serious. He stressed more than once in his speech that in case of proof of the fact of deliberate blowing up of weapons depots, it should be treated as a terrorist act, in which "people were killed and billions of dollars in damage was caused." And also that the perpetrators, including if it turns out to be the Russian state and / or its special services, should not evade responsibility.

As for the fate, under the new conditions, of the tender for the completion of the Dukovany nuclear power plant and possible supplies of the Sputnik V vaccine to the Czech Republic, Milos Zeman put it this way: It makes sense to consider and buy vaccines from Russia if there really is a shortage of such drugs in his country. At the moment, Astra-Zeneca and Johnson & Johnson disrupt supply contracts, and there are other publicly known problems with these vaccines. Zeman himself said that he had taken the "Faizer", although at the same time he noticed that he had no choice. Regarding the participation of Rosatom in the tender for the construction of a new power unit in Dukovany, the Czech president said that, firstly, the refusal of the Russian company would be justified in the event of a final confirmation by the investigation of the participation of Russian special services in the incident in Vrbetice, and secondly, to solve this there will be not the current cabinet of Prime Minister Andrei Babis, but the next government - in the fall in the Czech Republic elections. So both of these questions, from the point of view of the Czech president, remain open. And he generally refused to link the vaccine to the political situation in any way.

Zeman was also asked about his reaction to the support of the Czech moves on the mass expulsion of Russian diplomats to other EU and NATO states - Slovakia, Poland, the Baltic states, etc. The presenter asked him, they say, there was enough evidence provided. And then Milos Zeman answered interestingly - "Well, we also supported someone in the incident with the Skripals ..." This can be understood in two ways. I will not try to put into the mouth of the Czech president what he did not mean, but we all know that in the "case of the poisoning of the Skripals" in English Salisbury, with the participation of all the same defendants - Petrov and Boshirova, with the evidence everything, to put it mildly, very vaguely, and until now no one has actually answered all the main questions. But the expulsion of diplomats plus an international scandal with accusations against the Russian Federation, it all happened immediately in many EU countries. Within the framework of solidarity, of course. And then there seemed to be enough evidence for everyone too ...

And finally, as they say, "the cherry on the cake." As I expected (see the previous article on "Reporter" "Russian trace" in the explosions in the Czech Republic: What local authorities "forgot" to tell everyone), the Czech government for the sixth time, after the incident with the explosion of weapons depots in Vrbetice, which had already literally rumbled all over the world, presented Colonel Michal Koudelka, the chief of Czech counterintelligence, and a kind of record-loser, to receive the rank of general. already five times before that, Milos Zeman himself had refused this title. It seems that it was and is why. Since this whole story with (not) General Koudelka in the Czech Republic itself is already a "talk of the town," the TV presenter, apparently, simply could not help asking the president on this topic. And here Zeman's words were more than interesting. Firstly, he said that Koudelka had recently received another medal from the US CIA, so, they say, his work still does not remain completely without awards. And then he added: “... do you remember what role this special service (meaning the American CIA) played in the war with Iraq? As it turned out, all this was a lie, and the consequences were terrible, and people died ... This is how these special services work. And they also need to be rechecked ... ". The message of Milos Zeman about who the chief of the Czech counterintelligence works for and, accordingly, his entire service, is absolutely clear, as well as the extent to which the results of their activities can be trusted. If, in the words of the Czech president himself, "even such special services as the CIA" have such failures ... or not even failures at all, but deliberate actions (I am already adding this on my own behalf).

Well, as for specifically such a desired general rank for Colonel Koudelka (only the Supreme Commander-in-Chief, that is, the President of the country can issue such ranks in the Czech Republic), the prospect is still more than vague and, it seems to me, Koudelka's seventh attempt cannot be avoided - Zeman said that this issue would be resolved based on the real results of the Vrbeticka Causa, and also said that even during his fifth attempt to become a general, last year, when Koudelka once again "found" a lot of agents of the Russian special services on Czech territory, the office the President demanded from the counterintelligence some materials confirming this, which have not yet been offered by anyone.

So six "visits" to the rank of general for Michal Koudelka, apparently, is not the limit. Unless, of course, at the end of the Vrbetitsky investigation, which will not be led by himself, but only by the police and the prosecutor's office, this Czech colonel, so beloved by the Americans, will generally remain in his post and with the existing rank. Anything happens in life ...

And if we take into account the fact that this whole situation with the explosion of military warehouses six years ago in Czech and international politics, as well as in the minds of local citizens, also created a kind of "explosion", in this case, it seems to me, there is hope that that in the end we will find out the truth. Unlike the Skripals, the downed Boeing MH-17, etc. Especially given the very tense relations between the Czech Ministry of Internal Affairs and the special services of this country, the upcoming parliamentary elections and the very ambiguous reaction to what is happening by the local population, as well as the position of the country's president and his personal attitude to the activities of his own counterintelligence. Milos Zeman announced long ago that he was not going to run for the next term, as well as to continue his political career in general. His presidential term expires in 2023. So, in this case, the “loss of the political image” does not bother him much. In contrast to his own principles and authority as an honest and impartial leader of his own state, which, apparently, he wants to remain in Czech history.
Ctrl Enter
Noticed oshЫbku Highlight text and press. Ctrl + Enter
We are
Who actually won the Cold War and what the future holds for the world
Ten "defeats" of Putin
Reporterin Yandex News
Read Reporterin Google News
29 comments
Information
Dear reader, to leave comments on the publication, you must sign in.