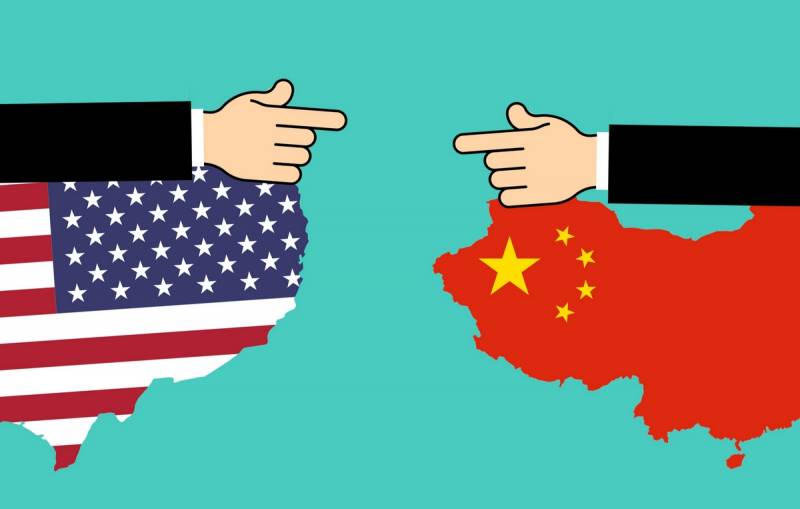 It is already obvious that the 2020s will become an era of tough single combat between the United States and China, economic, geopolitical, and, no less important, ideological and semantic. The latter has a much more complex configuration than the former confrontation between America and the USSR, where everything seemed simpler and more straightforward.


The strength of the United States is its as yet not lost ability to flexibly form meanings in each specific historical epoch. The meanings are attractive both for their own nation and for a significant number of people around the world, which ensures a steady flow of immigrants to the New World. Today it is called "soft power", although the phenomenon itself has existed for much longer. "Lighthouse of freedom", "land of [great] opportunities" - these phrases did not appear yesterday - they are decades old.

Today the BLM movement, an innovative "green" economy and an ambitious plan to build state-of-the-art public infrastructure across the country, called the America job plan. The latter is actually an updated edition of Roosevelt's New Deal, as a response to the rapid Chinese successes in a similar area.

In the logic of the nation's renewal, two new states may appear in the United States, after the status of individual territories has changed. Of course, we are talking about the District of Columbia and Puerto Rico, whose residents can finally receive full-fledged representation in Congress. And this, it is worth noting, is almost 4 million people, which mainly vote for the Democrats.

The announced completion of almost twenty years of military campaign in Afghanistan is also a kind of search for new meanings, the turn of eras. If, of course, the Americans really leave this South Asian country forever.

Many analysts have already noticed that in the gathering pace of confrontation between the United States and China, in addition to the obvious geopolitical and economic, it is the ideological component that has become more and more obvious. With the arrival of Joe Biden in the White House, the idea of ​​a global "alliance of democracies", a kind of alternative to the UN, was returned to public discussion.

This is far from a random idea. A significant part of American intellectuals hoped that by becoming an ally of Washington (and in the seventies and eighties this was a fact) and having tasted the fruits of the free market, Beijing would eventually move away from the communist system towards greater democracy and liberalism. After all, this is what happened in the Philippines, South Korea and Taiwan. However, China did not follow the path predicted to it, causing first bewilderment and then the anger of the intelligentsia of Western countries. This was followed by the problems of Hong Kong, Xinjiang and so on.

This is not to say that today's rich China is devoid of its attractiveness. Many third countries gladly accept his investments and assistance. For example, Egypt and Morocco, both of which have the status of Major US Ally outside NATO (along with Israel, Japan, and South Korea), have reportedly started using the Chinese COVID-19 vaccine. And this is a very indicative step.

However, some political few successes. For any superpower, power over minds on a global scale is also important. An attractive image of the country, people, civilization in the world.

And here the current superpower - America - has long been winning on points in terms of demonstrating its own attractiveness to the world. In the nineteenth century, this was the romance of the pioneers of the West, in the twentieth - the shining lights of skyscrapers, jeans, rock and roll, a supermarket packed with goods, in the twenty-first - the culture of the IT communities of Silicon Valley and the adventurism of private space corporations.

What can China oppose to this? The radiance of skyscrapers and the luxury of the consumer society of their coastal metropolises? But Asia has seen it all. In South Korean, Japanese, Singaporean and even partly and in some places - in Malaysian and Thai performance. Obviously, the political system of mainland China does not have any kind of exclusive right to wealth. All the same is possible under different starting conditions and a completely different political regime.

Yes, China always has a good chance to offer a single country in any region of the world a lucrative trade agreement, which happens everywhere. But, as mentioned above, Beijing cannot imagine an image of the future that is attractive to people of different races, nationalities and religious beliefs around the world. And not only the future, but the past too.

Putting it in the language of crude comparisons, people around the world are willing to pose as cowboys from the American frontier. But are there many who want to try on the rags of a Chinese peasant of the Qing dynasty? This is called soft power.

And here China is still inferior, although ironically, half a century ago - in the sixties and seventies of the XX century - radical Maoism enjoyed prohibitive popularity among European and American "leftists".

At the same time, the United States has no problem communicating its own meanings. The American soldier is fighting around the world for more than the abstract ideals of freedom and democracy. These ideals are converted into quite concrete and accessible things - a personal car in the garage of every citizen; stable gasoline and turkey prices for Thanksgiving in every home.

Someone will say that now a number of countries in Europe, Pacific Asia, or the Middle East can boast of a much higher standard of living than the average American. But this prosperity is deceiving. The current wealth of the United Arab Emirates or South Korea completely depends on the world economic and geopolitical situation, and the United States has been forming this very situation for more than a century.

In any case, joining an ideological confrontation where there are already obvious geopolitical and economic contradictions does not bode well for the world (and with it Russia).

Even in the Second World War, there was no such clear division between democracy and dictatorship - not only authoritarian, but even totalitarian regimes stood on the side of the allies. However, now such a decisive division of the world according to socio-political preferences no longer seems impossible.

And in this sense, it is very important how both sides of the new bipolar world see Russia in general, and modern Putin's Russia in particular. Simply because an unambiguous and implacable enemy can appear on either side of the barricades, as well as a suspicious, but still quite obvious ally.
Ctrl Enter
Noticed oshЫbku Highlight text and press. Ctrl + Enter
We are
Who actually won the Cold War and what the future holds for the world
Ten "defeats" of Putin
Reporterin Yandex News
Read Reporterin Google News
37 comments
Information
Dear reader, to leave comments on the publication, you must sign in.