Anti-submarine aviation of the Russian Navy: simulated targets and blanks instead of weapons 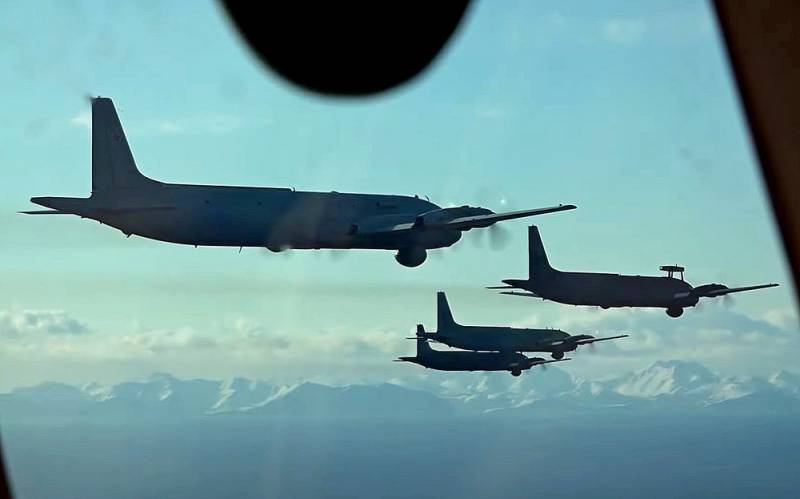 On April 12, the press service of the Ministry of Defense reported:

A tactical group of five Il-38 and Il-38N anti-submarine aircraft of the mixed air regiment of the Troops and Forces in the North-East of Russia, as part of the final check during the winter training period, worked out training actions to search, detect and track the submarines of the imaginary enemy, using on-board anti-submarine systems ... For the first time, five anti-submarine aircraft of the Pacific Fleet simultaneously conducted a group search for submarines of the conditional "enemy", placed mine installations and carried out anti-submarine bombing. In a given area, the crews discovered and attacked from the air a specially simulated underwater target, about 50 practical aviation depth training bombs were used.
News this was happily picked up by a number of our media, although in fact this is nothing more than an admission of a complete disaster with our anti-submarine aircraft.


Depth charges instead of torpedoes, excuse the level of the beginning of World War II (for the first anti-submarine aircraft MK24 "Fido" began to be used by the Allied aircraft back in 1943).

In fact, we do not have anti-submarine aviation, and what we have is outdated by about 30-40 years. Moreover, this applies even to such new complexes as Novella (the modernized Il-38N aircraft). So what's the deal?

The newest complex "Kasatka" from "Radar-MMS", appointed (by the former command of Naval Aviation) our "head organization" for aviation PPS (anti-submarine search and sighting systems) and complexes (despite the fact that nothing on this topic has ever been developed), in his advertising video about the real "efficiency" (in quotes) shows figures, from which it follows that the detection range of modern low-noise submarines is for the used dropping hydroacoustic buoys (RGAB) RSH-16M ... several hundred meters!

Moreover, these are just real numbers, as experts have repeatedly written about (the so-called "crisis of the local observer", caused by a sharp decrease in target noise - down to levels close to background). Are there other solutions? Yes there is. And they have long been implemented (since the end of the 80s) and massively implemented (since the 90s) in foreign new teaching staff based on three key of technologies:

- the use of a separate RGAB not as a "detector", but as a "sensor" of the distributed antenna of the buoy field, the task of processing the data of which and the functions of the "detector" are solved by the PTS of the aircraft or helicopter;
- multi-position operation of various hydroacoustic means optimally distributed in the search area and complex joint data processing (for example, the US Navy through the LAMPS helicopter system is provided with the transfer of RGAB data for their integrated processing with the SQQ-89 ship anti-submarine complexes;
- in necessary cases, the implementation of an active low-frequency "illumination" of the water area (after which even an absolutely silent submarine appears in the role of a "fly not glass"), and in its modern form, low-power and even secretive (ie, not detected by the target submarine) "Booming" with powerful active messages to the floor of the ocean (after which the whales were thrown ashore) are a thing of the past.

With this approach, the detection ranges of even the most quiet submarines can reach tens of kilometers, and the high speed and large supply of buoys on aircraft make them the most terrible enemy of our submarines. Let me emphasize that all this became a mass reality in the navies of foreign countries already in the 90s of the last century.

At the same time, the Russian Navy, even in the latest ships and aircraft, "froze" in the distant 80s:

- the joint operation of aviation and naval search tools is obviously not provided (both in hardware and software, and in that they "simply" work in different frequency ranges);
- aviation facilities (aircraft, modernized Ka-27M helicopters) have search tools in their "ideology" that are 30-40 years behind the world level (and this is not the fault of the industry, modern solutions and technologies were offered there, these are precisely outdated incompetent requirements customer (Navy and Ministry of Defense).

Moreover, even a relatively modern (and quite workable) "Novella" went to the fleet "castrated" - without all the prescribed nomenclature of new RGAB. In public procurement, there are only modifications of the ancient RSAB (development back in the early 80s) RSL-16. Very good results can be obtained on the modern PPS and on the RSL-16, and our science has conducted such effective experiments. But we do not have modern PPS, and with those supposedly "newest" ones, which are, the real ranges are scanty several hundred meters (ie less than a kilometer!), I.e. there is no need to talk about any effective search for submarines with such means ...

In addition, one cannot fail to note another very formidable factor - the radar for searching for underwater objects (and other non-acoustic means), or rather the registration of weak disturbances on the water surface due to the movement of the submarine's hull at depth. These works began a very long time ago in the USSR, and the results were very promising (with good statistics of real detections, but unstable).

However, in our country "all this has died," and now, when you talk about this with representatives of the Navy's aviation (with reference to foreign works), a typical phrase has become:

- And what, did we have something on this topic?
It was, and how! Just one example, from the memoirs of the head of the department for advanced design of the Central Research Institute of them. Krylova A.M. Vasiliev with the assessment of this issue by the last Soviet Deputy Commander-in-Chief of the Navy for shipbuilding and armament, Admiral Novoselov:

... at the meeting he did not give the floor to the head of the institute, who was eager to tell about experiments to detect the surfaced trace of a submarine using a radar. ... Much later, at the end of 1989, I asked him why he dismissed this question. To this Fyodor Ivanovich replied: "I know about this effect, it is impossible to protect oneself from such detection, so why upset our submariners"?
With all this, one cannot ignore the opinion that our enormous “utilization of budgetary funds” for submarine exploration turns out to be a determining factor in the fact that the Russian Navy practically completely ignores modern trends in the development of means of searching for submarines. Those. revealing acute problems with stealth and the appearance of our submarines (including the latest ones) can lead to a logical reduction in budgetary allocations for them (which some individuals and organizations really do not want).

Those. Are the private interests of "spending budget funds" above the real military security of the country? Where are the admirals looking? And somehow, too often lately, they look at what high posts they will occupy after the navy in the OPK, respectively, "spoiling relations" with the OPK turns out to be practically the same as "putting an end to a career." "Wonderful question" (in quotes) - where is the former chief of aviation of the Navy now?

But even more "interesting" (in quotes) is the situation with weapons.

In fact, our anti-submarine aviation is throwing bombs because there is nothing else to throw. It all started with the "weapon of the 3rd generation" - the UMGT-1 torpedo and the APR-2 anti-submarine missile, which entered service in the late 70s of the last century. In order not to "spoil the statistics", then the Naval Aviation went to a complete refusal to use new practical torpedoes (with homing systems on and their real guidance at target submarines), replacing them with throwing torpedo shells.

And this kind of "combat training" (in quotes), figuratively speaking, with "wooden machine guns", continues to this day. At the same time, the UMGT-1 torpedo had extremely low noise immunity, and according to the experience of its use at research sites on special target submarines, with the timely use of even primitive countermeasures, they always evaded. Those. the real combat value of the UMGT-1 in the war was a big question.

The APR-2 airborne anti-submarine missile was a completely different matter; at the turn of the late 70s, it had, probably, the world's best anti-jamming, accurate homing system. APR-2E in the export version is quite a lot and was gladly used in a practical version by foreign customers (India, Cuba, Syria). Moreover, in India, comparative tests of the APR-2E with the latest western torpedoes were carried out, and our APR-2E proved to be very worthy. 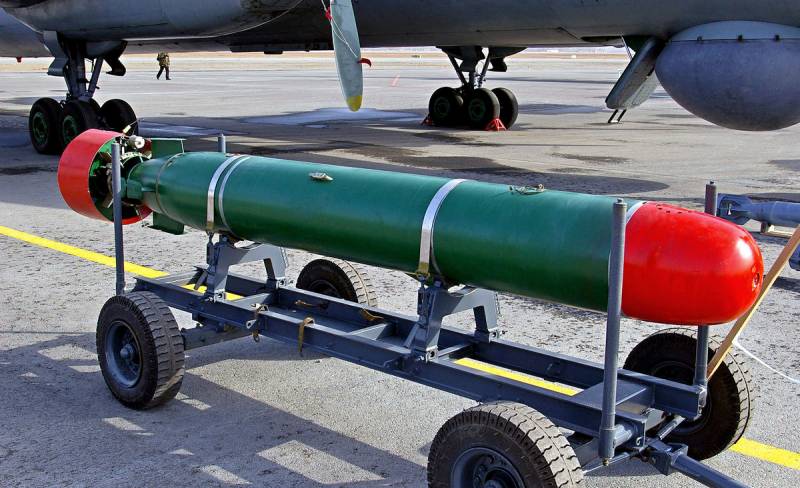 The main means of "combat training" (exactly in quotes) of anti-submarine aviation of the Navy is a blank (without guidance system, engine and rudders) of the UMGT-1 torpedo
However, the naval aviation of the Navy in the entire history of the operation of the APR-2 did not order from the industry a single set of re-preparation (for practical firing), throwing only its blanks. All practical applications were carried out exclusively by the industry through periodic testing and advanced research.

The experience of the APR-2 made it possible to create in the 80s a much more effective APR-3, and became the foundation for a successful solution in the State Scientific and Production Enterprise "Region" of the most difficult task - the creation of effective airborne torpedoes.

Now the modernized version of the APR-3M, according to the statement of the head of the TRV corporation B.V. Obnosov, is serially produced and supplied to the Ministry of Defense.

A logical question arises - was an unprincipled decision to abandon its real practical application also made for the APR-3M of naval aviation?

Why in the anti-submarine aviation exercises announced in the media, despite the significant number of aircraft involved (and, accordingly, the consumption of an expensive resource), practical anti-submarine weapons were not used? Indeed, without its actual use, there is no need to talk about its development and the possibility of effective use in combat conditions.

Why our aviation does not have modern search and sighting systems (and moreover, their development is not even asked by the customer), why is there no modern and effective RSAB?

In fact, today the country and the fleet do not have anti-submarine aviation. What we have today is only capable of efficiently performing patrol tasks.

Our aviation is incapable of fighting submarines.
Ctrl Enter
Noticed oshЫbku Highlight text and press. Ctrl + Enter
We are
RTOs and "Varshavyanka" - our military response to the Americans
"Internal kitchen" of the Navy. Construction wars for access to the budget of the Ministry of Defense
Reporterin Yandex News
Read Reporterin Google News
15 comments
Information
Dear reader, to leave comments on the publication, you must sign in.