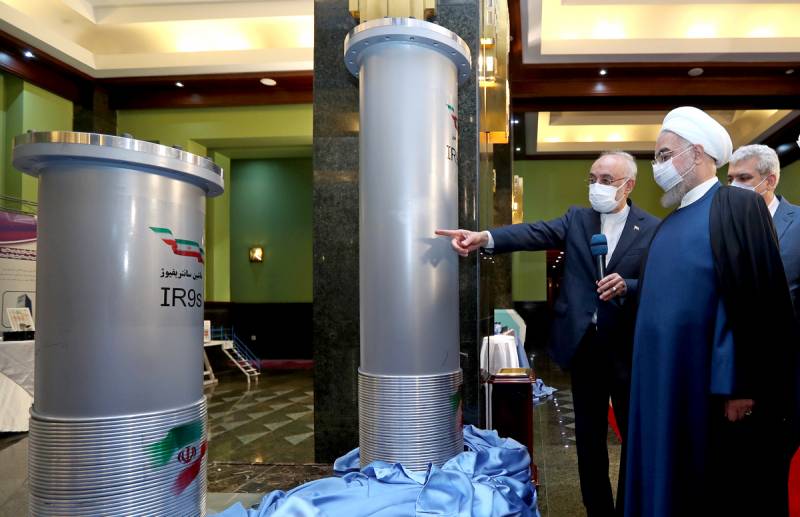 Two days ago, an explosion occurred at the Iranian nuclear facility in Natanz. No one was hurt, but uranium enrichment work was suspended. It did not take long to search for the guilty. According to The New York Times, the explosion was orchestrated by Israeli intelligence services. The "Jewish trace" was also confirmed by the Israeli Jerusalem Post, which stated that Mossad could be involved in the attack. Why, unlike last year's assassination of leading Iranian nuclear physicist Mohsen Fakhrizadeh, is the Israeli intelligence service not even trying to hide their possible involvement?


The root of the problem lies in the relationship between Iran and Israel, as well as their "nuclear" status. These countries, neighbors in the Middle East, are mortal enemies. They do not have a common border, so the IDF can only inflict airstrikes, and Israeli planes will first have to cover almost XNUMX kilometers through other countries. Tehran resolves the issue differently, consistently trying to move its military infrastructure closer to the enemy, deploying it on the territory of Syria and Lebanon, while acting through a "proxy". Complicating the situation is that the Jewish state secretly, in violation of all international norms, created a nuclear arsenal, the presence of which does not confirm, but does not deny. The position of Tel Aviv at one time on this issue sounded like this:

We do not have nuclear weapons, but if necessary, we will use them.
Is it any wonder that Iran is interested in developing its own nuclear weapons to establish military parity with its main enemy in the Middle East? Strictly speaking, the Islamic Republic has long been a member of the nuclear club. Back in 1957, she signed a cooperation agreement with the United States called Atoms for Peace. Iran has been a member of the IAEA since the very founding of this organization. In 1963, he joined the Nuclear Test Ban Treaty, but the presence of a regional adversary with a nuclear arsenal forces Iran to seek to acquire its own. In response, Israel is pursuing what Tehran calls "nuclear terror" against the Iranian nuclear program.

In 2007, under strange circumstances, the famous Iranian nuclear physicist Ardeshir Hasanpour was gassed. Even then, the name of the Israeli special service "Mossad" was announced. In 2010, physics professor Masoud Ali Mohammadi was killed by a bomb explosion. In the same year, there were two more explosions under the cars of Iranian scientists Majid Shahriari and Fereydun Abbasi Davani, the first was killed, and the second managed to survive. In 2011, "unknowns" blew up Mostaf Ahmadi Roushan, an employee of the Natanz nuclear center. And in the fall of 2020, the famous nuclear physicist Mohsen Fakhrizadeh, who headed the Amad project to develop a nuclear warhead for a ballistic missile, was shot.

Tehran blames all these killings on the Israeli and American special services, which are trying to bleed the military direction of the Iranian nuclear program. By the way, in December 2020, Fahmi Hinawi was shot in Tel Aviv by "unknowns" in his car, whom the Middle Eastern press calls a high-ranking Mossad official involved in organizing the assassination attempt on Fakhrizad. Apparently, Tehran did not “wipe off”, as some of our former compatriots, who emigrated to Israel and were deeply imbued with the local spirit, expected.

However, let us return to the latest terrorist attack in Natanz. Why is this time "Mossad" almost beats itself in the chest, almost directly informing through the American and Israeli media loyal to it about its possible involvement? This is so unlike the usual way of working for special services. To answer this question, the general context must be taken into account.

Washington and Tel Aviv, unable to defeat Iran without unacceptable damage, made an open bet on Iran. economic strangulation, and quite a few succeeded in this. President Donald Trump unilaterally pulled the United States out of the 2015 Comprehensive Settlement Action Plan by reinstating previous US sanctions. For the Islamic Republic, this was a very sensitive blow, since it lost most of its oil export revenues, and even against the backdrop of pandemic restrictions. The socio-economic situation in the country has deteriorated sharply. However, by 2021, a lot had changed. First, the Republicans in the White House have been replaced by Democrats who are interested in reviving the "nuclear deal." Second, Iran has taken two important steps towards breaking the western blockade. Tehran announced its readiness to join the Eurasian Economic Union, where it will gain access to the 200 millionth market. Beijing also signed a $ 400 billion investment agreement with Iran over the next 25 years. Thus, Israel's plans to gradually strangle their worst enemy began to come apart at the seams.

So why did the Mossad actually take responsibility for the Natanz attack?

Probably, the goal of the Israeli leadership was to provoke Tehran into tough retaliatory measures in order to disrupt its negotiations with Washington to revive the "nuclear deal". Tel Aviv understands that the possible lifting of sanctions and the receipt of external investment in the enemy's industry and infrastructure will lead to the economic strengthening of the Islamic Republic and an increase in its financial capabilities for the implementation of weapons programs. Israel cannot defeat Iran by military means without unacceptable damage, and, most likely, it will not succeed in strangling it. Hence the increased attention of the loyal press to the provocative terrorist attack. And what else is left for them?
Ctrl Enter
Noticed oshЫbku Highlight text and press. Ctrl + Enter
We are
"A blow to Dimona will be enough." How Iran will avenge Israel for its scientist
Iran's nuclear diversion: Israel sharply raises rates
Reporterin Yandex News
Read Reporterin Google News
24 comments
Information
Dear reader, to leave comments on the publication, you must sign in.