Why does Russia need BAM, and why the military will finish building it 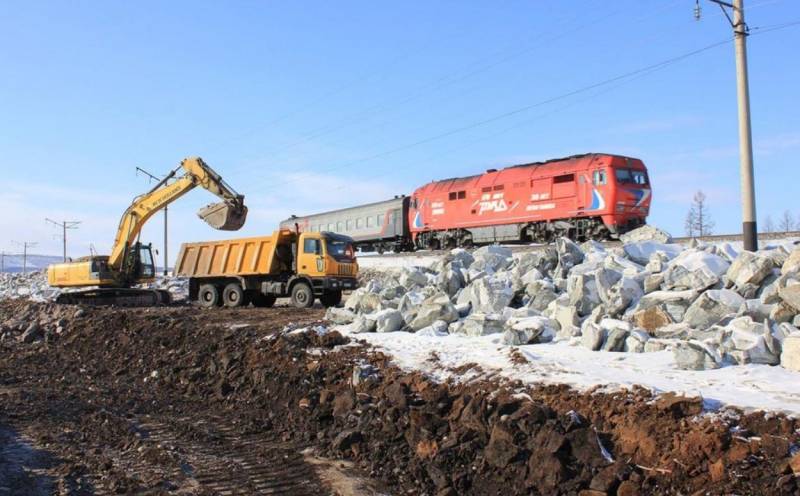 The "Suez incident" not only made many look differently at the Northern Sea Route, but also breathed new life into Russian railways, which transit through most of Eurasia. The Kremlin gave the go-ahead for an accelerated expansion of the throughput capacity of the Baikal-Amur Mainline (BAM), and for this, instead of Russian Railways, the RF Ministry of Defense will be involved. What are the prospects for our country?


BAM is one of the largest railway lines in the world, built by members of the Komsomol, criminals and the military. This Soviet infrastructure project was rightfully considered the most ambitious and should contribute to the comprehensive development of the country, but after the collapse of the USSR, liberal views criticized it harshly, calling it "the road to nowhere." So, one of the ideologues of market reforms Yegor Gaidar said the following about BAM:

The trouble is that no one has ever thought about the elementary question: “Why are we building this road? What are we going to carry along it and in which direction? " The project cost about four times as much as anticipated and was never fully completed.
What went wrong, and why did the Russian military undertake the completion of the highway today? Let's try to answer Egor Timurovich in absentia, although the discussion will definitely not work out.

At firstIt should be noted that in the leadership of the USSR there were people no more stupid than Gaidar and other domestic liberals. The railway line, which runs deep in the country, was needed primarily for military reasons because of the danger posed by China. In 1929, Chinese troops captured the Chinese Eastern Railway, and the Red Army was able to regain control over it only by military force. Moscow drew the right conclusions, and in 1932 the first decree on the construction of the BAM was issued, but the project was postponed due to the outbreak of the Great Patriotic War and a general shortage of resources. And in 1969, the Chinese threat reappeared during the armed conflict on Damansky Island, and it became clear that there was a real risk of Beijing blocking the Trans-Siberian Railway, which would cut the USSR in two. The first work on the BAM, which runs much to the north, began already in 1971. Today, the Russian Federation seems to be on friendly terms with the PRC, but history should not be forgotten.

Secondly, it was assumed that the Baikal-Amur Mainline would give an impetus to the development of hard-to-reach regions of Eastern Siberia and the Far East. At the same time, it was not only about the export of natural resources. Along the entire length of the BAM, from 9 to 11 powerful territorial-industrial complexes were to be built, which would provide highly qualified jobs, and the corresponding infrastructure would appear around.

Alas, only the South Yakutsk coal complex was actually built. Housing for the BAM workers was being built temporary, it was badly dilapidated and in some places it was just falling apart. There is a constant outflow of the population from the nodal settlements. Nor did the “proprietary recipe” of domestic liberals work: to transfer the deposits of natural resources into private hands so that everything would “fly in”. The "terribly effective" oligarchs Oleg Deripaska and Alisher Usmanov suspended the early XNUMXs after the crisis and have not resumed the implementation of the promised projects to this day. The revival is only taking place at the Elga coal deposit, from where raw materials are exported to the countries of the Asia-Pacific region.

Thirdly, the leadership of the USSR intended not only to extract minerals, but also to connect Sakhalin Island with a single railway network with the mainland of the country through a tunnel or a surface crossing. There was even a project for integration with US railways through Chukotka and Alaska. Unfortunately, we recently gave up on the idea of ​​building a bridge to Sakhalin, and therefore there is simply no incentive to sew the entire North-East together with a common transport network.

Therefore, he is not so useless, this BAM, simply requires a different attitude towards himself. Today the potential of this "road to nowhere" has been appreciated by carriers. Almost all of its throughput in 2020 was chosen due to the growth in the transit of goods from Asia to Europe. Russian Railways had a plan to expand transport capacity from 124,9 million tons to 180 million tons by 2024. However, it turned out that, for a number of reasons, civilian builders could not do this, and therefore Moscow again turned to the military. The Ministry of Defense of the Russian Federation will take over the construction of the second branch of the BAM, which follows from its official press release:

All ten brigades are leaving for the construction of the section, which is currently assigned to the railway troops from Ulak to Fevralsk - 340 kilometers.
Military builders have already shown themselves excellently when laying a bypass railway line to bypass Ukraine. They helped build the Crimean bridge, and now they are solving the problem of water supply to the peninsula. It is assumed that with their participation, the second branch of the highway will be commissioned a year earlier, in 2023.
Reporterin Yandex News
Reporterin Yandex Zen
22 comments
Information
Dear reader, to leave comments on the publication, you must sign in.