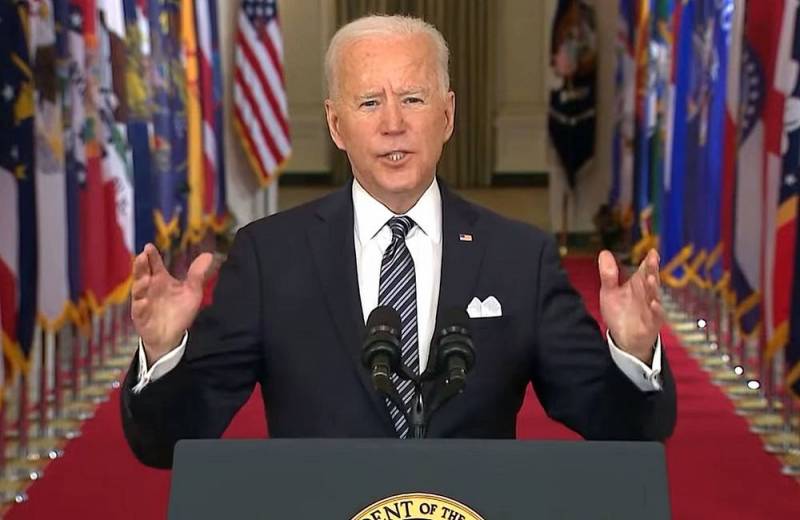 So far, high-ranking officials from the administration of the new US president, and he himself, are personally conducting intensive telephone negotiations with Kiev, expressing "the strongest support" for him, and in fact, encouraging new provocations and aggressive actions in the Donbass, in the United States more and more loudly voices are heard of those who do not feel the slightest enthusiasm for the irresponsible actions of the White House and the Pentagon in this crisis. Really, the Washington politicians it would be worth listening to them before continuing on a course fraught with a military-political escalation in the east of Ukraine.


American society, embraced by a multitude of problems, today is categorically not disposed to fight, and the army is hardly ready for hostilities with such an adversary as Russia. The signals about this are extremely clear and ignoring them, the US authorities can make a fatal miscalculation.

The very authoritative American edition of The National Interest published an extremely harsh article on the eve of a senior fellow on defense and foreign policy at the Cato Institute, Ted Galen Carpenter. It openly states that the current actions of the US administration in relation to Ukraine are not just a "bad idea", but the right path to truly disastrous consequences. At least - for the most "nezalezhnaya". The author of the publication draws direct parallels between the current events and 2008, when, as he claims, it was "the disastrous policy of George W. Bush" that made the then President of Georgia Mikhail Saakashvili believe that the United States and NATO would provide his country with direct military support in the event of an armed clash with Russia. In fact, it pushed to unleash hostilities.

The supply of weapons worth millions of dollars, the training of the Georgian army, and most importantly, as Carpenter writes, "the frantic praise by Bush and other high-ranking officials of Washington" of Saakashvili himself and his "democratic revolution" created an extremely dangerous illusion in the Georgian president that "if something happens." The United States will not hesitate to go to war on his side. When, as a result of "dizziness" from these alleged "successes", Tbilisi decided to start an aggression against South Ossetia and ran into a powerful "response" from Moscow, all these fantasies collapsed very quickly. Bush, who called him from Washington, once again assured him of "the full commitment of the United States to the territorial integrity of Georgia," but not a single bomber received a command to take off and not a single aircraft carrier left the base. The author of the article gives a clear definition of the reason why "NATO troops remained in the barracks" - not a single country of the Alliance had even thought of risking a confrontation with Russia with nuclear arsenals "because of some kind of territorial dispute."

This was followed by eating a tie in front of a TV camera, and, as Carpenter writes, "the forced acceptance of a humiliating peace by Saakashvili." At the same time, Mr. Senior Researcher is pretty disingenuous, "forgetting" that actually in August 2008 our troops could enter Tbilisi and put the tie-eating president before the tribunal for everything that was done on his order in the same Tskhinvali ... However , the fact that Mr. Carpenter is not a sympathizer of Russia is clear at least from the definition he gives in his opus to Abkhazia and South Ossetia - “separatist regions”. On the other hand, the more valuable are his further conclusions and warnings. The similarity of what is happening now in Ukraine and Donbass with the events of 2008, he considers "frighteningly gloomy." The actions of the West are deliberately ignoring "Vladimir Putin's repeated warnings that by supporting Ukraine, they are crossing the red line regarding Russian security." And he warns: "Biden seems to be going to repeat Bush's mistake!"

Further, Carpenter "draws" two possible scenarios for the further development of the situation. As he believes, most likely, August 2008 will repeat itself, and Ukraine "will share the fate of those countries that, blindly relying on US assistance in a critical situation, paid for them with a crushing military defeat." In his opinion, "Kiev will have to experience the same humiliation as Tbilisi, and the American leaders will again show what their bellicose statements are worth." However, according to the author of The National Interest, this is an even better option. Carpenter, albeit with an extremely low degree of probability, admits that "the Biden administration will come to an attempt to give a military response to Russia." He calls such actions "extreme madness" and writes that "not a single sane American can want the United States to fulfill its promises to Ukraine."

Is it before the war now ?!

Someone might think that the above presentation is a purely personal opinion of a certain analyst, which does not reflect the general mood in the media and in society. No way! First of all, any reputable mass media, wherever the case takes place, is the spokesman for the opinion and position of certain individuals, groups and forces. Everyone who continues to believe in something different to this day is naive idealists ... The same The National Interest in the US itself is considered to be the “mouthpiece” of the highest echelons of conservatives. However, here is another example - in a completely different publication, National Review, an article by another authoritative expert, Lawrence Korb, appears. Again, a senior fellow, but this time from the Center for American Progress. This author does not directly touch on the events in Ukraine, but he undertakes to assert that "the US armed forces can no longer engage in the spread of democracy in the world." Especially - at the expense of American taxpayers who now need something completely different. Korb cites Afghanistan and Iraq as examples of how seemingly successful military operations turned into hopelessly lost campaigns.

Regarding the latter, he is generally extremely categorical - according to the expert, Washington unleashed hostilities against him "under a far-fetched pretext", and it all came down to "seizing oil resources", which today, according to the author of the article, are "milked" by "dubious PMCs" and some "Influential clans". The specifics and references to the "spite of the day" regarding the confrontation in Donbass in this speech, of course, are much less, but there is more than enough reasonable pacifism. One gets the impression that quite serious forces in the United States, who for one reason or another do not want to speak out directly, are extremely not interested in another military adventure, in which the country is about to get involved.

At the moment, the United States is not something that it does not want - it cannot fight. The statement that “to continue politics by other means” requires money, money, and more money, was considered an axiom a couple of centuries ago. Today, things are not going well in the United States, to put it mildly. No - there are plans widely publicized by the same Biden for "trillions of investments" in the development of infrastructure and something else ... But there is also reality. Here are just a couple of touches from it: according to official data from the US Department of Labor, the number of applications for unemployment benefits for the week ended March 20 of this year, rose to a record level, exceeding 120 thousand. In total, as of the time indicated above, more than 3.8 million people applied for financial assistance from the state due to the lack of work in the United States. In light of this, the data that since the beginning of this spring alone a quarter of a million people have appeared on the streets in the country does not look surprising at all.

This happened for the most commonplace reason for the United States - they were evicted because they did not pay the due rent. The total amount of "apartment" debt in the country has already amounted to more than $ 57 billion. At the same time, the owners of rented real estate complain that many of them have not been paid by the guests for a year or more. The government quite seriously fears that massive spontaneous riots are about to break out in the country, the participants of which will demand not "racial equality", but the abolition of rent for housing. In some places, demonstrations and strikes with such appeals, as well as under the slogans of increasing federal "coronavirus" aid, taking into account this problem, are already taking place. And in such a situation, to start a war that will devour tens and hundreds of millions of dollars every day? It looks too much like political suicide, and today Biden is reminded of it quite openly.

By the way, about suicides - solely in the light of the combat readiness of the US army at the moment. The Pentagon recently published shocking numbers - the number of suicides in the ranks of the military reached a record high in 2020. More than 570 soldiers and officers took their own lives - and this, as stipulated in the department, is only "preliminary data". Compared to 2019, the number of suicides in the army, in the navy, in the US National Guard increased by 13.5%. The most susceptible to this evil are the active army units related to the ground forces. However, as already mentioned, suicide collected its terrible tribute in all branches and types of troops, and the number of its cases increased from month to month and from quarter to quarter. The Chief of Staff of the US Air Force, General Charles Brown, as the main reason for this situation, calls "stress caused or intensified by the coronavirus." However, it is not known how much this is true - after all, his predecessor in this post, General David Goldfin, back in 2019, before the pandemic began, argued that suicide is "an enemy that kills more American military than any other enemy." Go into battle with personnel in such a moral and psychological state? This is truly a bad idea, as the Americans themselves say.

We can only hope that the real power in the United States is not only (and perhaps not so much) the "leader of the nation" sitting in the White House. Apparently, certain circles of the Washington politicians have a realistic understanding of the current situation and a very clear reluctance to cross the notorious "red lines". I would like to believe that common sense will prevail after all.
Reporterin Yandex News
Reporterin Yandex Zen
22 comments
Information
Dear reader, to leave comments on the publication, you must sign in.