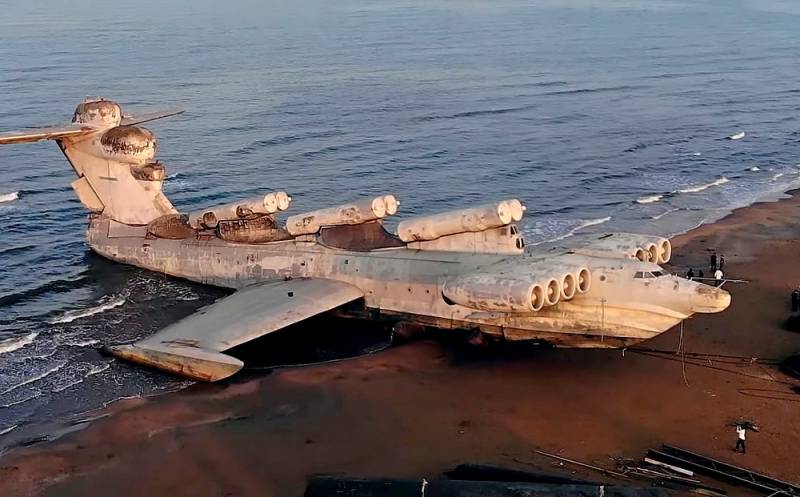 The recent "Suez plug" has drawn increased attention to the Northern Sea Route. Despite the great potential of this waterway, its opening requires considerable time and huge investments in infrastructure. This route with a total length of 14 thousand kilometers, running in harsh Arctic conditions, also needs to be guarded and regularly patrolled, to be able to quickly carry out a search and rescue operation, so that sea carriers feel themselves under reliable protection from Russia. And our country has something to offer them.


Perhaps the best solution would be to create a series of ekranoplanes, a kind of hybrids of aircraft and ships, which took most of the advantages of both types of transport, but, unfortunately, some disadvantages. What are ekranoplans, and why will they be in their place on the Northern Sea Route?

An ekranoplan is a multi-mode vessel that, in its main operational mode, flies using the "ground effect" over a water or other surface, without constant contact with it, and is maintained in the air, mainly by the aerodynamic lifting force generated on the air wing (wings) , body or parts thereof due to interaction with air reflected from the underlying surface.
The Soviet ekranoplan "Lun" had a length of 74 meters with a wingspan of 44 meters, its speed was 500 km / h, and it was able to travel a distance of 2000 km. The maximum take-off weight was 380 tons. The ekranoplan can fly both over the sea and over flat land. From the plane, he took a high speed, and from the ship - a high carrying capacity. "Lun" was the first and, alas, the only one in a series of combat ekranoplanes ordered by the USSR Ministry of Defense. They were all supposed to be armed with Mosquito anti-ship missiles, 6 pieces on board. The high, in comparison with the ship, the speed of movement, multiplied by the low flight altitude (up to 5 meters above sea level), in theory, should have made "Lun" and its brothers "killers of aircraft carriers." Unfortunately, ekranoplanes had their own rather serious shortcomings. Perhaps the most serious of these include very low maneuverability, as well as the danger of flying at extremely low altitudes, which can lead to disasters. It is enough to "strike" the wing on the water, and the emergency is provided.

Why is the RF Ministry of Defense returning to this old idea today? The fact is that in our country several interesting projects are being developed at the same time, which may be in demand in the conditions of the Northern Sea Route, as well as perform a lot of other useful tasks.

This is an ekranoplan, developed for the conditions of the Arctic by order of the Russian military by the Nizhny Novgorod Central Design Bureau. Alekseeva. Its exact tactical and technical characteristics are unknown, but it can be assumed that domestic designers took into account the Soviet experience. Most likely, "Orlan" will be much smaller and lighter than "Lunya", thanks to the possibility of using modern composite materials and other equipment. Instead of six Moskit anti-ship missiles weighing 4500 kilograms each, either the lighter Caliber cruise missiles or the Onyx anti-ship missiles will be used. Due to the reduced mass of the ekranoplan, it will be possible to install fewer engines, which will lead to fuel economy and an increase in the flight radius.

Thus, the combat ekranoplan will be able to safely patrol the Northern Sea Route, as well as attack sea and ground targets with missiles, in fact, functionally replacing naval aviation. Probably, these unusual aircraft can be attracted to anti-submarine warfare. In addition, the Eagles will be able to be used in search and rescue operations, freely landing on land, on the ice cover, and on the sea surface.

This is an even more interesting and promising Russian project of not a simple ekranoplan, but an ekranoplan. The Taganrog Aviation Scientifictechnical The Beriev complex describes the potential for using an unusual hybrid vessel as follows:

The concept of a super-heavy seaplane provides for flights both in the screen, over the ocean surface, and in high-altitude modes. The Be-2500 will become an ideal platform for delivering spacecraft to the upper atmosphere of the Earth's equatorial zone.
Unlike Orlan, the Be-2500 will be able to lift off the surface and take off to an altitude of several kilometers, overcoming any obstacles and at the same time increasing its fuel efficiency. With a take-off weight of 2500 tons, the ekranolit should lift up to 1000 tons of cargo into the air. The flight range of this device is estimated at 16 thousand kilometers, that is, it will be able to overcome the entire length of the Northern Sea Route in a non-stop mode in one patrol. In fact, this will be a kind of both long-range and naval aviation, ideally adapted to the harsh Arctic conditions. At the same time, the increased carrying capacity will make it possible to fill the ekranolit to the eyeballs with a huge number of anti-ship and cruise missiles, as well as means of fighting enemy submarines. Well, the possibility of using the Be-2500 as a carrier for spaceships will be an additional pleasant bonus.

It remains only to wish domestic developers patience to bring these aircraft to the series. They will definitely not be superfluous.
Reporterin Yandex News
Reporterin Yandex Zen
15 comments
Information
Dear reader, to leave comments on the publication, you must sign in.