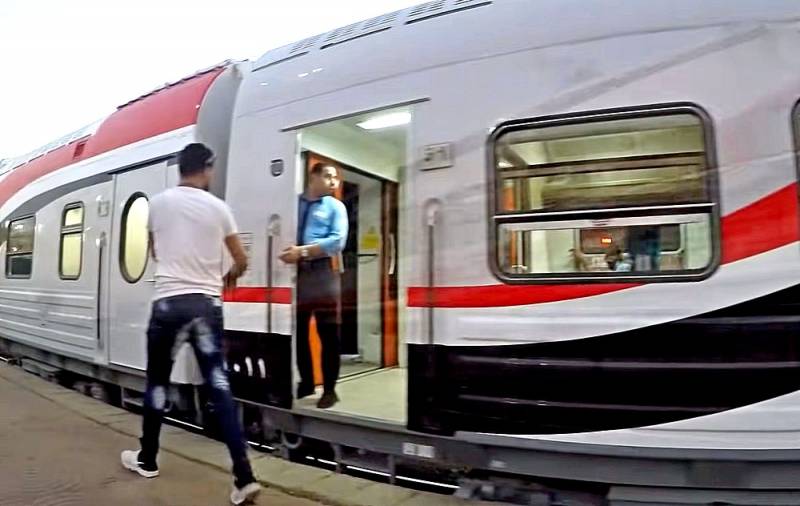 The National Administration of Egyptian Railways announced the possibility of obtaining travel passes for the citizens of the country on Russian-made cars equipped with dynamic ventilation. The popular Egyptian newspaper Al-Masry Al-Youm writes about this.


This service can be issued at all ticket offices throughout the country. The publication notes, with reference to the relevant department, that a subscription for traveling in Russian-made cars will be made available for different periods (1, 3, 9 and 12 months) at the request of each passenger.

It should be noted that the cars produced by the Russian company, which replace old, morally and physically obsolete platforms, are very popular in Egypt. On social networks, the Egyptians do not hide their enthusiasm for the design and convenience of Russian products. However, there are also negative reviews. They mainly concern the construction of the seats and the excessively high price of the ticket for the "Russian train".

It is noteworthy that one of the users posted a video on YouTube, thanks to which foreign users can also compare the conditions in old trains with those in new modern cars.


New passenger cars were assembled at the Tver Carriage Works under a contract signed by the Russian-Hungarian consortium Transmashholding Hungary Kft and the Egyptian National Railways company in September 2018. The contract provides for the manufacture and supply of 1300 passenger cars of various models of the 1st, 2nd and 3rd class.

Cars for Egypt have successfully passed certification tests in Hungary at the KTI Research Institute, where, among other things, the level of noise generated by the rolling stock, dynamic tests of driving performance and braking systems were measured. The tests were carried out at speeds of 80 km / h and 120 km / h.

Several consignments of wagons will be sent to the Arab country this year and next. Completion of the contract is scheduled for 2023.

For the Russian Federation, this is a very important foreign order for industrial products, especially notable for the fact that it is associated specifically with the civilian sphere, and not with the military.

It is worth noting that, despite all the praise for the passenger cars made in the Russian Federation, the Egyptians bought ES30ACi locomotives for their railways in the United States. They are currently supplied by Wabtec under a contract previously concluded by the Arab side with General Electric.
Ctrl Enter
Noticed oshЫbku Highlight text and press. Ctrl + Enter
We are
Railways problems threaten China and Russia itself
New taxes and more expensive parcels: what awaits Russians in 2020
Reporterin Yandex News
Read Reporterin Google News
6 comments
Information
Dear reader, to leave comments on the publication, you must sign in.