Victims of Import Substitution: Why Russia Sells Its New Corvettes to Algeria 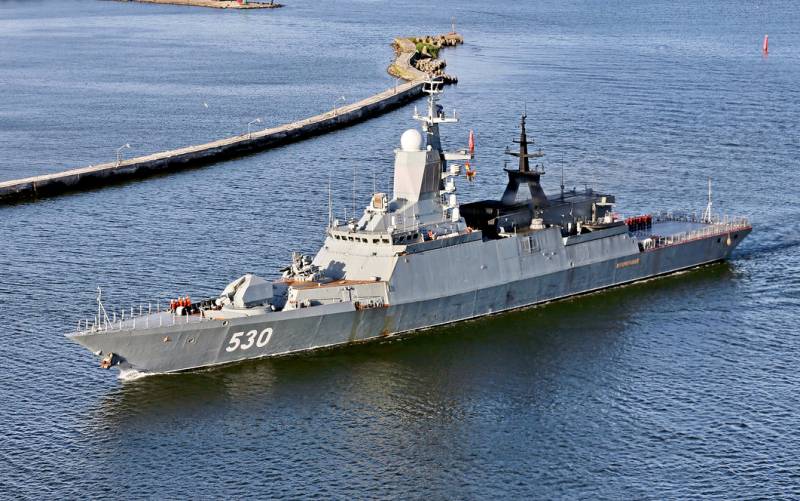 Not so long ago, information was leaked to the American press (Military Watch), citing Algerian sources, that the Algerian Navy plans to strengthen itself by purchasing three multipurpose URO corvettes of the near sea zone of the "Guarding" type from the Russian Federation. And even the dates for receiving the first two ships were designated - 2021-2022. If this happens, then Algeria will become the most influential force in its region, and its ships the most dangerous in Africa. The fact is that Project 20380 corvettes of the "Guarding" type are among the most heavily armed warships of their size range in the world, having no rivals for this rank outside the Russian Federation.


It is not for nothing that according to the NATO classification they are classified not as corvettes, but as frigates. Indeed, our 4th generation warship, which until recently in our country generally belonged to the 3rd rank TFR (small patrol ships of the near sea zone), in terms of firepower surpasses its western classmates by a head and can wage an equal battle with ships , much surpassing it in displacement (even with destroyers with a displacement of up to 5 thousand tons).

Another victim of import substitution, or why this attraction of unprecedented generosity?

One could be glad for the Algerian comrades, they licked their lips for a long time, looking at these our multipurpose invisible ships of the near sea zone. And so they approached, and that way. Since 2013, they have been negotiating their construction. But there was no official information about the conclusion of the contract. For the first time, the United Shipbuilding Corporation (USC) presented the model of the new version of the corvette of the project 20382 "Tiger" (this is the export version of the project 20380) to the public at the International Maritime Defense Show IMDS-2015 in St. Petersburg. The main difference between this project and the basic one was in the use when completing simplified weapons in export versions, as well as the possibility of replacing weapons systems with Western-made counterparts, depending on the specific requirements of the customer. The basic Russian configuration included the Yakhont or Caliber anti-ship attack complex, two Kashtan-M anti-missile defense systems, an A-190 100 mm artillery gun, and a Ka-27 deck helicopter.

According to rumors, then this contract was signed and it seems that even at the "Severnaya Verf" (St. Petersburg) construction began in 2015, but everything went under the heading "Secret". Information leaked to the press, and again foreign, only during a fire that broke out at PJSC Shipyard Severnaya Verf in July 2015, in which people were injured (1 dead, 6 wounded), then the press got a photo that could to identify the contours of the hull of the "Guarding" class corvette under construction. But the Russian side did not confirm the order, according to which the Algerian Navy was to receive not even three URO corvettes, but as many as six (in two different configurations: the first three with an emphasis on air defense - as air defense ships, the second three as PLO corvettes - with an emphasis on anti-submarine warfare).

Now the information has surfaced. And it seems, why worry? Money does not pull your pocket and is never superfluous. We need to rejoice, the budget has been replenished. But the trouble is that the Algerian Navy did not get the "Tigers" of project 20382, but the corvettes of the project 20380, which are being built at the "Severnaya Verf" by order of the Navy for the Black Sea Fleet of the Russian Federation. These are the corvettes "Zealous" and "Strogiy", laid down in February 2015, the first of them was launched in March 2020 (currently undergoing mooring tests), the second is being prepared for launching in the spring of this year. It would seem, where does such an attraction of unprecedented generosity come from? We ourselves do not have enough ships of this class, why do we scatter them?

Help: Ships of projects 20380/20385 are a series of Russian multipurpose corvettes (small patrol ships) of the 2nd rank with guided missile weapons (URO) of the near sea zone. Developed by the Almaz Central Marine Design Bureau (St. Petersburg) in the late 1990s - early 2000s. Designed to perform escort and strike missions in the near sea zone, patrolling coastal waters, sentinel service. This project of ships for the next 30-40 years was to become the basis of the Russian Navy in the near sea zone.

At the moment, 10 ships of this class have already been built (8 are in service, 2 are launched and are preparing for mooring tests), 3 are under construction. Total 13. And for the construction of 16 corvettes, contracts have been signed between the RF Ministry of Defense and the Severnaya Verf Shipyard (St. Petersburg) and the ASZ (Komsomolsk-on-Amur). It turns out that as of the end of 2020, 29 units of the basic project 20380/20385 and its subsequent modifications were built and contracted, which makes this series of ships the largest series among the main classes of ships of the 4th generation of the Russian Navy. According to the adopted doctrine of the development of the domestic fleet, it is corvettes (along with frigates) that should become the very backbone around which our surface naval forces will be formed. The ship fleet of the Russian Navy is inevitably aging, we run the risk of being left without any BNK (large surface ships) of the 2030st and 1nd rank by 2, and since the budget is not rubber, it was decided to rely on small pennants, saturating them with fire and giving the ability to resist the much larger ships of a potential enemy. So, in contrast to the American destroyers and cruisers, we relied on frigates of the 1st and 2nd rank and corvettes of the 2nd rank.

As of the current moment in the Baltic Sea Fleet there are 4 corvettes of project 20380 - the head "Guarding" (since 2008 in service), as well as "Smart" (since 2011), "Boyky" (since 2013) and "Steadfast" (since 2014). In the Pacific Ocean as part of the Pacific Fleet - "Perfect" (from 2017), "Loud" (from 2018), "Hero of the Russian Federation Aldar Tsydenzhapov" (from 2020), all three ships of the project 20380, and one more project 20385 - "Thundering" (also from 2020). All other under construction and contracted hulls were intended for the Pacific Fleet and the Black Sea Fleet (now, because of the Algerian contract with the Black Sea Fleet, questions have arisen, two ships intended for it are being transferred to Algeria). Why, more on that below.

For now, I will explain how project 20380 differs from project 20385. In principle, these are the same type of vessels, the only difference is in armament, which is why the latter was lengthened by 2 meters (106,3 m versus 104,5 m), which led to an increase in displacement (2430 tons versus 2250 tons) and the replacement of the power plant, the capacity of which had to be increased (24 thousand hp versus 20,8 thousand hp). The increase in size made it possible to increase the firepower of the ship by replacing the Uran anti-ship complex (with its subsonic Kh-35U anti-ship missiles) with the UKSK 3S14 with the possibility of using the entire family of Kalibr-NK cruise missiles, the Onyx supersonic anti-ship missiles, and in the future hypersonic "Zircons" (ammunition for 8 missiles). In addition, the ammunition load of the Redut air defense missile system was increased from 12 to 16 cells. As a result of these innovations, a versatile multipurpose air defense-PLO corvette with anti-ship warfare functions (in the basic version of project 20380) turned into a multipurpose attack corvette URO (in its modernized version of project 20385). All this significantly expanded the combat capabilities of the ship. Agree, the appearance of tactical strike missile weapons ("Caliber", "Onyx", "Zircon") will make any kitten a tiger.

With such equipment, this ship already represented a formidable weapon with which it was possible and necessary to go into the distant sea and even oceanic zone to solve the problems: 1) search and destroy submarines of a potential enemy; 2) counteraction to warships of all types and classes; 3) fire support for the landing; 4) conducting patrol and escort operations; 5) protection of maritime communications and marine facilities economic activities; 6) demonstration of the flag and military power of the Russian fleet anywhere in the World Ocean. This was facilitated by the improved seaworthiness of both versions of the ship (it is resistant to roll and is capable of performing combat missions in rough seas of up to 5 points) with an autonomous navigation range of 4 nautical miles (at a speed of 14 knots). And its low radar signature, achieved through the use of new composite materials (in the manufacture of the hull and superstructure, it was possible to reduce the circular dispersion of the radar background by 3 times), significantly increased the survivability of the ship (the probability of targeting an enemy anti-ship missile system on it fell 5 times, from 0,5 , 0,1 to XNUMX).

And everything would be fine, but this technique very sensitive to operating conditions. Economical, no words, the corvette "Loud" (5th serial), according to the deputy. Pacific Fleet Commander Rear Admiral Igor Korolev, became "the most economical ship in the entire history of the Navy and is capable of making single autonomous voyages to the shores of Australia." Capable, but will it work? The example of the lead ship of the corvette "Guarding" is alarming. In the first few years of service and combat activity, both medium-speed diesel engines of the main power plant broke down twice on it.

For this reason, it was planned to equip the project 20385 with the German MTU Friedrichshafen diesel engine, but the 2014 sanctions intervened. Because of which, the head corvette "Thundering" was forced to receive, instead of the German power plant, the domestic production of JSC "Kolomna Machine Building Plant" (4 diesel engines 16D49), and from December 2020, as part of the Pacific Fleet, began to serve, according to the results of which a decision will be made on continuation of the series. The first serial corvette of this project "Provorny" was launched in September 2019 and is now preparing for mooring tests (it is equipped, like the head corvette, with Kolomna diesel engines). The rest of the contracted ships of the project 20385 are still in limbo, awaiting the results of the service and combat activities of the "Thundering". In May 2015, representatives of the manufacturing plant (PJSC Shipyard Severnaya Verf) even announced that project 20385 was being phased out due to problems with imported components, and only two ships (“Thundering” and “Provorny”) would be built on it with the replacement of foreign components. on domestic, and the rest will be built according to the modernized project 20380. How it will actually be, let's see. By the way, the Algerian corvette will be equipped with a German MTU diesel engine, not a Kolomna one (apparently, the Algerians know something). All this became the reason for replacing the Kolomna DDA-20386 with a more reliable and lighter (but also more expensive) Yaroslavl gas turbine unit KGA MA12000 (based on the new M3FR GTE engine) in the promising project 90 Almaz Central Design Bureau. So, summing up a certain result, we can say that the corvettes of the project 20385 fell the next victim of the sanctions war between the Russian Federation and the collective West.

I have to put an end to this for now. To be continued ... There we will talk about the project 20386 corvettes.
Ctrl Enter
Noticed oshЫbku Highlight text and press. Ctrl + Enter
We are
The trouble came from where they did not expect: How Russia coped with the lack of ship turbines
Why Russia was forced to make a choice in favor of Project 11356 URO frigates
Reporterin Yandex News
Read Reporterin Google News
47 comments
Information
Dear reader, to leave comments on the publication, you must sign in.