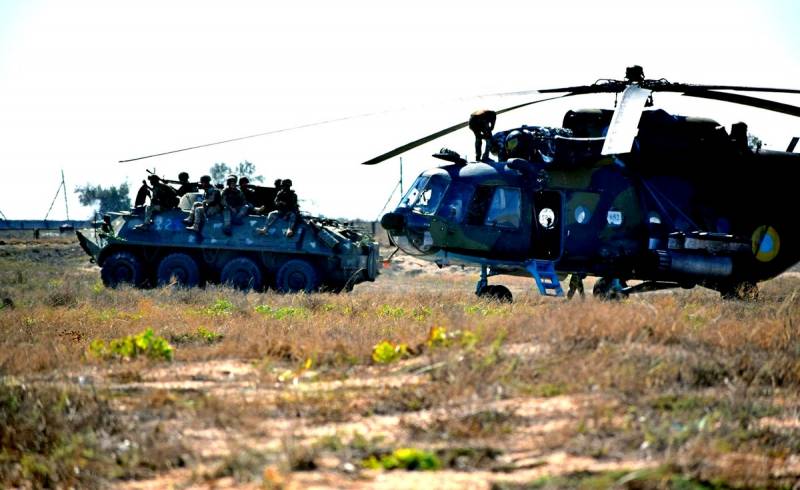 On the anniversary of the reunification of Crimea with Russia, another "spring aggravation" took place in Ukraine. Independent Ambassador to Germany Andriy Melnyk called on Berlin "to take on a moral duty to end the illegal occupation of Crimea", and not just like that, but for "the everlasting historical responsibility for Nazi tyranny and 8 million Ukrainian war victims." This is how unobtrusively one of the NATO member countries was called to the war with the Russian Federation. Who will actually go where, let's try to figure it out.


In fact, the experience of the collective war of the West against our country for the Crimea already exists, and it has been repeated many times. Suffice it to recall the eponymous Crimean War of 1853-1856, when the British, French and Ottoman empires, as well as the Sardinian kingdom that joined them, fought against the Russian Empire. And, alas, we lost it then. The affair ended with a rather humiliating Paris treatise, according to which the Russian Empire lost part of its territories and military infrastructure, and its Black Sea Fleet was sharply reduced. However, the Russian soldiers showed great courage, holding Sevastopol against the coalition troops of the interventionists for 349 days, and in the future we managed to replay the consequences of the military defeat. Serious economic and military reforms.

The second seizure of Crimea took place during the Great Patriotic War. The combined German-Romanian troops occupied the peninsula and besieged Sevastopol for 250 days. Among the reasons for the defeat of the Red Army is the lack of shells and other ammunition caused by the almost complete sea and air blockade of Crimea by the Germans. According to various sources, during the defense of the peninsula and during its subsequent liberation by Soviet troops in 1944, about 1 million of our fellow citizens died. During the Nazi occupation, more than 15 thousand people were brutally tortured and killed in the death camp located on the territory of the Krasny state farm. In general, all this makes the invitation of the Ukrainian policy Germany to Crimea. Many Germans with relatives in Argentina must have winced over this proposal.

Will the modern FRG or the NATO bloc, in general, recapture the peninsula for Kiev? Of course no.

At first, a fairly large military grouping of the RF Armed Forces is concentrated in Crimea, armed with modern types of weapons, including: Iskander-M OTRK, Smerch MLRS, Solntsepek TOS, Dagger air-launched hypersonic missiles, cruise missiles "Caliber", coastal missile systems "Bal" and "Bastion", SAM "Triumph" and "Favorite", etc. All this and much more is organized into a deeply echeloned defense that is capable of besieging and thinning out even the most powerful army of the aggressor.

Secondly, theoretically, the NATO bloc can still assemble a grouping numerically and technically superior to the Russian corps, which is guarding Crimea. But how to secretly transfer hundreds of thousands of foreign military personnel who will be morally ready to fall in battle for the national interests of Ukraine, with all the necessary armored vehicles and aircraft, to the peninsula? No way. And these are not all the components of the Crimean puzzle.

Let's remind that now is not the 19th or even the 20th century. A local war for the Crimea or the Kaliningrad region will no longer work. An attack on these or any other Russian regions will automatically be considered military aggression against the entire nuclear power. In accordance with our military doctrine, the Ministry of Defense of the Russian Federation can respond with nuclear strikes not only against an enemy assault force trying to land on the Crimean coast, but also directly on the territory of the aggressor countries, destroying decision-making centers. All of this is well understood in the North Atlantic Alliance, therefore they are not so much preparing to fight with Russia as they are portraying this readiness, at the same time assimilating the allocated financial resources.

The only country that can really try to attack Crimea is Ukraine itself. Kiev understands that Moscow, for a whole range of reasons, will not use nuclear weapons against the fraternal people. Well, the RF Armed Forces will not use weapons of mass destruction against the Armed Forces of Ukraine, that's all. That is why the United States can further incite Ukraine against Russia under the pretext of "de-occupation of Crimea." Something like this is possible if the Minsk agreements are first implemented and the state border is transferred under the control of Ukrainian border guards. Then the Armed Forces of Ukraine will free themselves and move from Donbass to the border of the peninsula. There they will gradually accumulate in anticipation of the right moment. The attack may begin with a missile strike by the Neptune anti-ship missile system against the Russian Black Sea Fleet base in Sevastopol and other military facilities of the Russian Defense Ministry. American curators will help the Armed Forces of Ukraine with intelligence and, possibly, send the Ukrainian army HIMARS MLRS to destroy Russian military airfields and air defense systems.

No, we are not saying that Kiev will win and be able to recapture Crimea by military means. Still, the forces are incomparable and the entire local population of the peninsula is on the side of Russia. The APU will be defeated and thrown back, but they are capable of doing things. Why would such an attack, initially doomed to defeat, to Washington? Well, at least, this is an excuse to apply another package of tough sanctions against Moscow, send NATO troops to Ukraine to “protect” it, and at the same time, from a safe distance, see and check how well the Russian army is now operating and whether its weapons are actually so effective. ...
Reporterin Yandex News
Reporterin Yandex Zen
18 comments
Information
Dear reader, to leave comments on the publication, you must sign in.